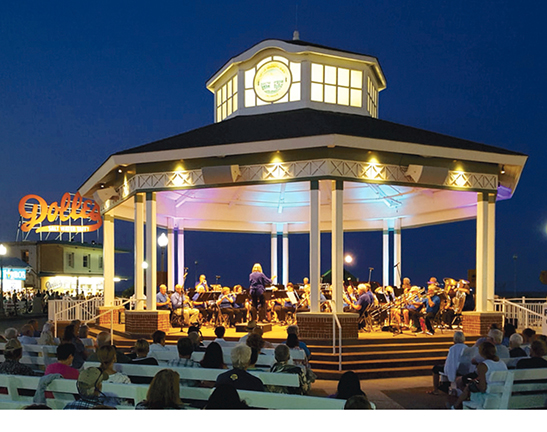 Missing the Sound of Music

Rehoboth is silent. Sure, there’s chattering on the street from those adventurous few who dot the sidewalks and the boardwalk. But what about the music? Where is Tchaikovsky? Where are the show tunes? Where is the fun of summer concerts on the bandstand?

Well, we all know the answer to that, and so do the members of the Rehoboth Concert Band. Reflecting the town’s hardships, the RCB had to totally shut down the second week in March, with all concerts cancelled and rehearsal space closed.

So, what do you do during a pandemic when your stated purpose is to “keeps toes tapping and the applause coming?” Music Director Sharon Still says options are limited. But that doesn’t mean that the RCB is dormant.

Sharon elaborates. “Actually, we have already started back!” In May, RCB musicians answered the call of CBS News’ "Taps Across America." On Memorial Day, band members played “Taps” from their front yards, porches, the beach, and so on, encouraging their lucky neighbors and friends to listen and record.

Some recordings were emailed to CBS for playback on a broadcast the following week. In July, band members played patriotic songs for small picnics on their own decks. Meanwhile, some soloists recorded themselves and uploaded recordings to the band’s Facebook page; the band hopes to add more. And the band’s brass quartet recently played for a virtual service celebrating a local church's 170th anniversary.

Not allowing the pandemic to keep them down, many band members are using the hiatus to keep musically sharp and to get better at their skills. Oboist and four-year band veteran Ed Fick says, “I have been trying to work through some of the old studies and exercises I have had in my collection for ‘hundreds’ of years!’” For Fick, the most difficult part of the down time? “Without the band rehearsals and concerts, it is harder to keep focus and stay in musical shape. For oboe players that includes not only playing, but reed making as well.”

And, of course, they all miss making music together. Sharon longs for the relationship part of being with other musicians, seeing everyone’s smiling faces, and feeling the pride when a rehearsal is well done. And the whole band misses the excitement of performing on stage, looking out at an audience of friends, family, neighbors, and community.

So, how is the RCB staying financially afloat during the pandemic? From the band’s beginning in 2012, the organization has been very frugal with finances. In addition to ticket sales, they receive donations and grants from organizations like the Delaware Division of the Arts. Also, the band has saved a little every year to develop a “rainy day” fund. “I think this pandemic time could definitely be defined as a rainy day!” says Sharon.

As the area yearns for live music, when will the RCB make its return producing pop, show tunes, and marches alike? Of course, like the rest of us, they have no idea. As soon as it is safe to make music again, they will set up a small schedule of performances to test the waters. Small groups and soloists may begin performing first, then perhaps a "baby" band, hoping soon to move to a full band. Still says it will take about four weeks of rehearsal to prepare for their first post-pandemic concert.

Most band members are chomping at the bit to get back to playing and performing. Almost all of them have been playing their instruments since elementary school. Sharon points out that the band includes school band directors, retired band directors, and musicians who played professionally. Sharon herself has been a band director for her entire career and started playing in a concert band when she was 11. She echoes the thoughts of most band members, “Music is my life!”

She adds, “Please visit our website at rehobothconcertband.org and follow us on Facebook. And be on the lookout—you may hear three or four RCB members playing together on a street at the end of a cul-de-sac, or in a backyard, or on someone's deck near you. And if anyone out there wants a small ensemble to give a little one-hour concert in your neighborhood, we can provide that as a community service!” Just contact rehobothconcertband@gmail.com.

So, as we all suffer the sounds of silence during this pandemic, we can at least look forward to the day that Tchaikovsky and show tunes again fill the air. Perhaps more than we realize, music is our life, too. So here’s to a Rehoboth bandstand filled with music, with the Rehoboth Concert Band leading the way.