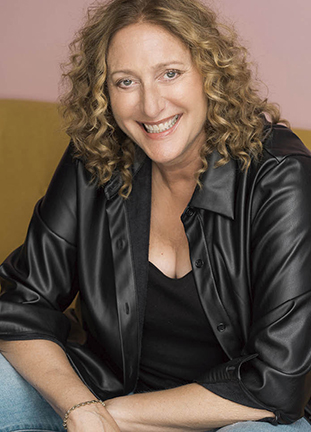 Yes, She Can Say That
Judy Gold Headlines SUNFESTIVAL

If there were a Swiss army knife of the entertainment world, it might well be Judy Gold. She’s an actor, TV writer, producer, podcast host, storyteller, musician, author, and standup comedian, but the common denominator is that she’s funny. Funny enough to win two Daytime Emmy Awards for her work as a writer and producer on The Rosie O’Donnell Show. Funny enough to have her own off-Broadway show. And funny enough to have a long-running podcast called Kill Me Now with Judy Gold.

One of her best-known efforts was her one-woman show, 25 Questions for a Jewish Mother, co-written with Kate Moira Ryan and described as “a performance piece that explores it all: from rugelach to rabbis, matzoh to marriage, Ann Landers to Anne Frank, and guilt to G-D.” It was based on interviews with more than 50 Jewish mothers and included stories about her own mother and her own life as a lesbian Jewish mom.

Judy Gold has made two prior appearances in Rehoboth—2009 and 2014—and is now set to headline at SUNFESTIVAL on September 3. Fay Jacobs (no slouch in the comedy department herself) says, “Judy is royalty in the LGBTQ comedy world. Her humor is smart and hilarious, and she does so much for our community.” And that last part is why Judy Gold is more than just funny.

“When I started in the ’80s, I didn’t talk about being gay,” Judy says. “I was working all the mainstream clubs, and I wanted to be a comedian who happened to be gay.” Things changed when she had a child. Suddenly, “I had all this material about being a lesbian mom.” So, in the mid ’90s, she decided to come out as a gay parent in the mainstream clubs. “Most of the gay comics were working in safe rooms, and I just was like, ‘Every comic talks about their family. I’m talking about my family.’” She worked straight clubs and shows on Comedy Central, “and it was just ‘there’s Judy—she’s funny, and she happens to be gay and talking about her partner and her kids.’”

When told that Fay Jacobs acknowledged her contribution and called her royalty, Judy is overcome. “Oh, my God! That is so sweet.” She jokes, “I love you, Fay Jacobs,” but admits, “it really makes me feel good. It touches my heart.”

On her podcast Kill Me Now with Judy Gold, Judy and her guests discuss things that annoy them and it’s a long list. “It’s not like I get older and I’m getting less aggravated,” she says. “Injustice, stupidity, ignorance…people who are not curious…what is happening?” She’s particularly concerned about free speech. “I really truly believe in free speech—all speech is free speech.”

It’s an issue that most comedians face. And it’s gotten worse in today’s everything-offends-somebody world. Still, Judy doesn’t shy away from controversy. “The more subversive the topic, the better the joke better be. You can joke about anything, but you better have a great joke.”

Judy even authored a book on the topic: Yes, I Can Say That: When They Come for the Comedians, We Are All in Trouble (Dey Street Books, 2020). In it, Judy says, “Laughter is a unifier. It’s the best medicine.” The book has received enthusiastic reviews. Funny lady Amy Schumer had this to say: “No one makes me laugh harder than Judy Gold.” {Ed.  note: Judy will be signing copies of her book at Browseabout on Sunday, September 4, from 11:00 a.m. till noon.}

There’s a long tradition of Jewish mother jokes, and being a lesbian Jewish mother gives Judy an additional comedic angle. “Thank God for the gays and the Jews,” Judy says. “They love to laugh. People who are marginalized have the best sense of humor. We don’t take ourselves seriously.”

Judy has good memories of her past visits to Rehoboth. “When you perform in places where people are relaxed, they tend to laugh more,” she says. Judy and her wife, Elysa, are planning to stay for several days to enjoy the town and the beach. “We love it…we’ll definitely take advantage of being there.”

When asked what topics she might address during her SUNFESTIVAL performance, she keeps her jokes pretty close to the vest, but playfully says, “I’m going to talk about Fay Jacobs, for sure.” When pressed, she says, “I’m definitely going to be talking about free speech and cancel culture and how ridiculous it is.” And as in nearly all her work, “I’ll be talking about the LGBTQ community, my partner, and my relationship.”