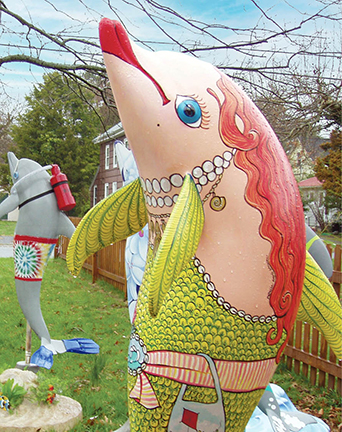 What’s with That Dolphin?

Someone posted a great photo of our Rehoboth Bandstand-area bronze dolphin recently, and it made me smile. And also realize how many folks have moved to Rehoboth in the last two decades who may not know the story behind our hallmark dolphin sculpture.

Once upon a time, over 20 years ago, when I worked for Rehoboth Beach Main Street (RBMS), we did a really fun project. Jealous of the cow sculptures in Chicago and the bulls and bears in New York, RBMS and the Rehoboth Art League teamed up for a fundraising project with dolphin sculptures. You may still see a few of them on front porches or in backyards around town.

The project provided 25 unadorned, white plaster/fiberglass sculptures, each sponsored by an individual or a business who paid for them to be sculpted and delivered to Rehoboth. Then, the Art League helped round up fabulous local artists to decorate the dolphins. Finally, the dolphins were offered at auction for local people or businesses to purchase.

This fundraiser raised so much money for the Art League and Main Street that we redid the project with 25 more dolphin sculptures two years later.

And these were no commercially available plastic dolphins, oh no. We’d hired a sculptor whose first name was Ned; his last is sadly lost to me, but he was a fantastic sculptor and a true artist. When he brought the prototype to the Main Street office, he touched it up a bit and we had plaster debris everywhere, including all over me. After all, it’s tantalizing to stick your hands in a tub of goo and fingerpaint on a dolphin’s fins.

Twenty-five dolphins later, all standing behind the office (which was a fabulous historic RB tent house, off Lake Avenue, now sadly demolished) and we were ready for the artists to paint. Nancy Alexander, Executive Director of the Art League at the time, did a fantastic job of recruiting some of the most well-known and well-loved artists in our artistic town. Off the top of my head I can remember stunning dolphins done by Lee Wayne Mills, Wendy Carr, Patti Shreeve, Murray Archibald, Joanne DeFiore, and so many more.

Ned delivered each dolphin to a local studio, house, or office, and when the artists were done, he picked them up and brought them back to Main Street. There are great photos of dolphins tied down in truck beds traversing town.

Then they were auctioned off. And almost all of them stayed downtown so we could number them and allow tourists to do a treasure hunt.

In fact, the dolphins were so beautiful that we arranged to have identical little versions of them manufactured and sold at Main Street. They were adorable. How many readers have 8-inch painted dolphins in their homes? I have six on my bookshelves. And it was another great fundraiser.

Two years later, it was rinse the plaster off and repeat.

That’s when we got the idea to talk to Ned and see if he was willing to cast a dolphin in bronze. We were taken aback by the $50,000 we’d need for the job, but some generous sponsors stepped up (their names are on the base of the statue) and I recall most of them with great appreciation. But aging gracelessly, I don’t want to forget a name, so you have to go look at the dolphin. And that’s a wonderful thing to do anyway.

It took another year for the city to approve placement of the bronze and for Ned to complete the project. But when it was done, we had our bronze, our memory of the fantastic dolphin project, and a new signature landmark downtown. “Meet me at the Dolphin!” became the standard meet-up decision and we have been meeting people by the dolphin ever since.

Go visit the bronze and see if you can find any others around town. You should be able to spy one at the Chamber of Commerce (railroad engineer dolphin), the Gallo-Hathaway Realty office on Rehoboth Avenue Extended, and in my front yard, lol.

Meet me at the dolphin! ▼