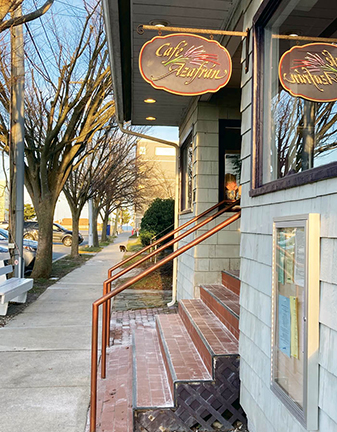 Café Azafrán: Heaven Is in Rehoboth

I can write this review in one word: Wow.

What’s that? My editor just told me I had to come up with more than one word. So here goes….

First, let’s talk about Café Azafrán itself. Now, when someone says a place is cozy, they usually mean it’s cramped and uncomfortable. Not here. It really is cozy—warm and set up so that diners don’t trip all over each other. In the same vein, the décor is simple, but eye catching. Interesting color schemes complement the artwork in view throughout the restaurant. Even the charming, ivory-laced curtains add to the homey atmosphere. The restaurant also has a spacious covered back porch and an accessible ramp.

Boasting a blend of Mediterranean and Spanish tastes, Café Azafrán is a family-run business helmed by chefs Richard Steele and son Ryan. They own the restaurant, which started in Lewes but has been an iconic Rehoboth eating place since 2010. They certainly know what they’re doing. The aforementioned atmosphere combines with a marvelous menu and excellent service to ensure a great dining experience.

On the night we dined, we were fortunate to have Lana as our server. She was engaging and knew the ins-and-outs of the menu as if she were the one in the kitchen doing the cooking. She was so attentive and friendly, and willingly answered the myriad questions that we newcomers asked. She was a welcome addition to our dining experience.

While we were perusing the menu, we were brought the customary basket of bread to use as a tasty way to tide us over to dinner. Tasty is an understatement. The bread, brought in to the restaurant from Old World Breads in Lewes, was fresh and more like an appetizer than a pre-meal filler.

And then there is the menu. Divided into small plates (tapas) and large plates, a difficult decision loomed before us. Do wife Sally and I get two tapas as our meal, or two large plates? Did we want a light meal and save space for dessert, or did we want a large plate and forego the after-dinner confections?

So, we naturally decided to get two small plates, two large plates, AND dessert.

Not all together, of course. We first pored over the tapas: luscious-sounding offerings like Grilled Veal Sausage, Duck Birria Tacos with Manchego cheese blend and lime consommé, and Baked Goat Cheese Gratin. After much deliberation, we managed to each select one dish and share. Sally ordered the Shrimp a la Plancha. It was five large shrimp served with a green herb sauce. The shrimp were perfect, not overcooked, and the herb sauce was delicious. I ordered the Spinach Ricotta Gnocchi with sage butter and pecorino. Oh my. What a combination of flavors, none of which overwhelmed the others. Lana told me it was a real customer favorite, and after one bite I knew she was telling the truth.

Sally gave me a quarter of one shrimp. I gave her nothing.

For our large plates, the menu choices were again challenging. Should Sally have the Azafrán Jumbo Lump Crab Cake? Or should she grab the Seafood Tarragona Bouillabaisse? Should I devour Seared Spiced Shrimp and Scallops? Or how about Pan Roast Half Rack of Lamb?

By the time we decided, we were hungry again. Sally went for the Flat Iron Steak with herb mashed potatoes, gorgonzola butter, asparagus, and demiglace. I chose the Pecan Crusted Chicken, pan fried and served with rice blend, asparagus, and maple glaze.

Our dinners came in generous portions. Her steak was marvelous, tender and full of flavor, with a spectacular sauce adding the final touch to a great piece of meat. Her potatoes, skins on and with perfect seasoning, were way better than normal mashed potatoes. Even the asparagus was special, tender crisp on the outside, just tender on the inside.

My choice of tender chicken pieces covered in maple glaze was terrific. Often, rice is treated as an afterthought, but in my dish, the chicken lay over part of the rice, so that the maple glaze found its way throughout. Never has rice been that good.

When it finally came to dessert, we reluctantly agreed to split something. We chose the in-house specialty—carrot cake. It was dense and moist, with large chunks of fruit. It was served chilled, and the ratio of icing to cake was perfect. But the topper (pun intended) was the maple syrup topping, drizzled over the rich, cream cheese icing. It was the last great star in a star-filled evening.

One of the things you should ask when deciding whether you like a restaurant is “Would I make it a point to come back?”

This one is easy. We’re already planning our next visit. Really, it still comes down to one word: Wow. ▼

Michael Gilles is a  playwright, actor, and director from Milton, and a regular contributor to Letters from CAMP Rehoboth.