November 20 Is Transgender Day of Remembrance

On Friday, November 20, Rehoboth TransLiance, in conjunction with Safe Harbor United Church of Christ (UCC) and the Metropolitan Community Church (MCC) of Rehoboth, will hold a short drive-in vigil at 7 p.m. at Rehoboth MCC Church, 19369 Plantation Road, in Rehoboth.

Attendees will be able to listen to the event on the radio from the safety and security of their own vehicles.

The Reverend Diane Fisher of MCC will provide a prerecorded prayer and the Reverend Chet Charbagh of UCC will lead the attendees in prayer. There will be a reading of the names of transgender people killed due to anti-transgender hatred or prejudice. This is the fourth annual Transgender Day of Remembrance vigil in Rehoboth.

The vigil will feature three young local community leaders, including Jay-Xavier a 34-year-old black trans man from Sussex County who currently works with combat veterans. Jay is also a youth mentor to the LGBTQ+ community.

In addition, Mikey Shock, a 19-year-old trans woman from Baltimore, Maryland will speak. She is set to attend the University of Arizona, seeking a master’s degree in Gender and Women’s Studies with a focus on gender, trans, and sexualities studies. The University of Arizona is one of the top universities in the country for transgender studies. She intends to work towards a PhD as a counseling psychologist, primarily with transgender patients and advocates for the trans community.

Also taking part will be Jazminara Aran, a young transgender woman from Seaford. She is attending Delaware Tech, currently working toward a liberal arts degree.

The speakers will talk about what their community looks like, where they found their community, and what is lacking in support and services in the area.

The Transgender Day of Remembrance was set aside to memorialize those who were killed due to anti-transgender hatred or prejudice. The event is held in November to honor Rita Hester, whose murder on November 28, 1998 kicked off the “Remembering Our Dead” web project and a San Francisco candlelight vigil in 1999. 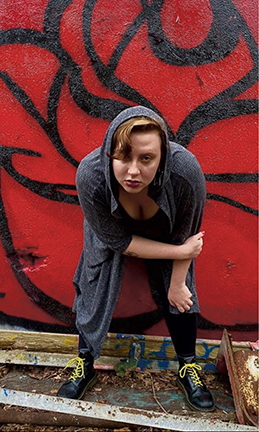 Mhic McDonagh, a queer female musician, has released the global launch of her first EP, GLOW, which is now available on all music platforms at distrokid.com/hyperfollow/mhic/glow.

Mhic or Michela, is from Long Island, NY, and is an activist and advocate for the expanded role and opportunities of marginalized artists in the electronic production and music industry.

McDonagh (@mhic.music) is a 2019 graduate of Boston’s Berklee College of Music and is among the thousands of millennials who lost a day job and was plunged into the chaos of quarantine. In quarantine, she composed much of the music on this first EP recording.

“I love a weird sound,” she says, following her mantra, “push buttons until you feel something.”

The two EP-preview singles, “Wait Up” and “Leave It Alone,” received great feedback from Mhic’s growing listener base and left them wanting more. And GLOW, she promises, delivers a whole lot more.

Lyrically, GLOW chronicles Mhic’s journey back to herself as she processes trauma, loss, and change. According to the songwriter, the EP unleashes language for things that are difficult to express, like anxiety, depression, abuse, and social media obsession, connecting to listeners in a deep and visceral way at the most isolated time this country has ever faced.

Mhic says, “GLOW translates emotion to sound. Through the alchemy of sound, layers, and effects on vocals, and a hefty selection of very cool beats, I show listeners what emotions sound like.”