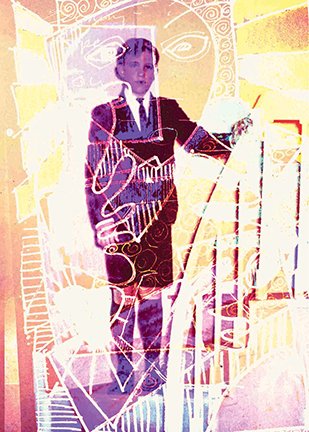 This 30th Anniversary year of CAMP Rehoboth would have been a much more celebratory affair had it not been for COVID-19. An understatement for sure, and one that could be modified slightly to apply to practically anything planned for 2020.

Having survived all of those 30 years in a relatively sane state of mind, reaching “escape velocity” from the organization I helped build and nurture has been a slow process. Nowadays, my attention is focused on future projects, and I’m excited to be back in my studio and immersed in creating a path forward for myself.

I will come back to that in PART 2, in the December issue of Letters.

Even without all that was originally planned for CAMP Rehoboth’s 30th Anniversary celebration, 2020 had been a year of review for me. With the exception of Sundance and some photo and Letters from CAMP Rehoboth work, my attention has been more focused on archives and history than on current operations.

After all, my life is embedded in the fabric of CAMP Rehoboth—and its words and images.

The CAMP Rehoboth website first became operational in 1997. After numerous facelifts over the decades, that early information, though still largely there, is not in great shape. Still, the site remains the best source of archive materials for us.

I took some time to look back at some of my early writing.

“Today is a Sunday afternoon, and Kathy [Weir], Steve [Elkins] and I are in the CAMP Rehoboth office working on this issue of Letters. A few minutes ago, we had lunch together and in the course of our conversation I told them that I was trying to make a conscious effort this year to look for help in some of the CAMP Rehoboth areas that have become my personal responsibility. I even put a note to that effect in my Outlook Tasks list. "Look for help in everything," it reads. Several times over the past couple of weeks I have started to delete that note, deeming it a silly waste of space, but each time I held back because of some gut feeling that the simple statement contained something important for me to focus upon. Kathy and Steve, by the way, nodded at my comments and continued eating their pizza, looking at me with a sort of automatic yeah-sure-that's-a-good-idea expression on their faces.”

“CAMP Rehoboth grew out of the summer. It grew out of the hearts of people who met in this special place and understood that here was fertile ground, here was a good place for positive, affirming creativity, here was a place we could call home. Here was a place where the vision of the rainbow could be nurtured and loved. Indeed, we do live in tumultuous times, in times of change. Homophobia is rampant throughout our society, and the closet culture that it breeds is an open wound within the body of humanity. CAMP Rehoboth grew out of a desire to heal that wound—to "Create A More Positive" world.”

“From the time I was a young boy I had a great love for the theater—I guess my gay "genes" were always a snug fit….While I was in the fourth grade I was cast as the young Patrick Dennis in a community theater production of the wonderful play, Auntie Mame. The play ran for two weeks with performances every night, and I loved dragging myself to school every morning with just a touch of eyeliner lingering purposefully around my eyes—just enough to let all my classmates know how I was spending my very sophisticated and "adult" evenings. Oddly enough I was never persecuted for it. Perhaps my queer innocence gave me a certain boldness of the same type that drag queens are able to use to their benefit when placed in a hostile environment.

My point in all this was the tremendous effect that the character of Auntie Mame was to have on the rest of my life. Because of my fourth-grade experience I have always loved that glorious story of how one woman's outrageous zest for life was passed on to her nephew—and all those who came in contact with her. In the musical version, the words ‘open a new window, open a new door, travel a new highway that's never been tried before,’ become an anthem to anyone seeking to encourage creativity and individualism.”

July 28, 2000; The Roots of CAMP: Our First Decade by Murray Archibald

“Ten years ago, we were a handful of people who fell in love with the idea that our community needed some kind of organizing, positive force around which to rally. Even then it was about heart—maybe I should say especially then it was about heart. In the beginning, it's always about heart. The trick is to keep the heart alive in the ensuing years, even in the face of the trials and tribulations that are a part of the life of all young organizations.

“From the first chapter in the story of CAMP Rehoboth, we began to create the verbiage that would become the defining language of CAMP Rehoboth: Creating A More Positive, Room for All, “safe and inclusive communities” and “Rehoboth is a family town, but families come in all sizes, shapes, and orientations.” At some point during that first decade, I remember suggesting to Steve that he change the stories he was telling to keep things new and interesting. He refused, instinctively knowing that only by telling our stories again and again would they become embedded in the foundation of our organization.

A quick glance at all the news stories that came out in the wake of Steve’s death show how well his instinct served us over the years. His stories and his language are all still here—as is his presence, and the influence he had on CAMP Rehoboth and on all of us.”

The story of CAMP Rehoboth continues. So does mine—but not on the same page. Join me next time for The Long Goodbye PART 2.