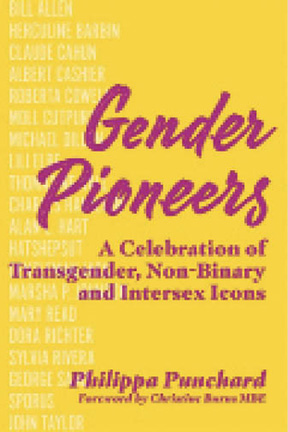 Take a left at the first road, then right and right again.

It’s always a good idea to know where you’re going—but then again, getting lost can have its benefits, too. Veering off an easy path gives you a chance to see things, maybe even something better. You can get all kinds of directions for life but sometimes, as in Gender Pioneers by Philippa Punchard, you just gotta step off the road.

In 1912, French audiences were thrilled by the talent of a trapeze artist known as Barbette. The lovely Barbette flew over the heads of Parisians solo, gracefully, and the best citizens followed those performances avidly. By 1919, Babette added to the end of the performance the revelation that “she” was really Vander Clyde Broadway, a male performer.

We might think that being transgender is “new” and just “a Western thing,” but Punchard has reason to disagree: history is dotted with men passing as women, and women living as men. As Christine Burns says in the foreword, “Trans people are not a new thing.”

Some seemed to do it as a means to an end: Ellen and William Craft wore clothing of the opposite sex in order to escape slavery in 1848. Betty Cooper may have worn men’s clothing for the same reason in 1771. Neither case, says Punchard, indicates “classical” trans behavior, but we’ll never know for sure.

Biawacheeitchish, who grew up to be powerful, wealthy, and with four wives, was kidnapped as a young girl and was encouraged by their Native American adoptive father to engage in male activities, perhaps because he’d lost two sons. In another time and place, Biawacheeitchish would’ve been called a “female husband.”

Dora Richter, the first woman to receive vaginoplasty, was killed by “a Nazi mob.” Dr. James Barry, a highly renowned surgeon, used “built-up shoes and…padding to appear more masculine….” James Allen and Billy Tipton were both married to women before death revealed that they were female. And Mary Read was a girl, until their mother lost her only son....

In her foreword, Burns says that there are “two awkward challenges” when we talk about trans people in history: were they intersex, rather than trans; and were they people—mostly women—who presented as the opposite gender to gain the benefits of the opposite gender? The questions demand more study and Gender Pioneers offers a launching point.

Open this book anywhere and you’ll see that the theme here is serious, but author Philippa Punchard also lends a bit of breeze. There’s no certain order to what you’ll read, and while the entries reach back to ancient times, they focus more on the past 300 years or so; each of the articles is short and to-the-point, and the soft illustrations invite browsing. For readers who want a quick read, this works.

Be sure to keep going through both appendices of this book, where you’ll find a wealth of further information and dates to remember. Historians and readers of trans history will find Gender Pioneers just right. ▼