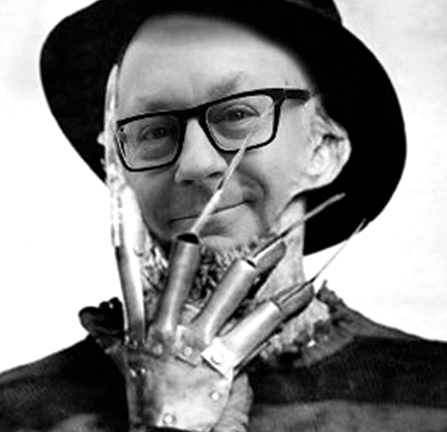 I Am Freddy Krueger

I don’t know about you, but whenever I log onto my Facebook account I seem to come face to face with yet another Buzzfeed quiz. What Muppet am I? Which pop star should be my best friend? Which Disney princess would I be? I’ve ignored them because, frankly, I’m not one for deep personal introspection. There are just some aspects of my personality I’d rather not understand.

The other day, though, a writer friend I met in New Orleans posted a “Which Fictional Serial Killer Are You” quiz on his Facebook feed. It gave me pause. Might this one be quiz worthy? I clicked, answered ten short questions, and in a few seconds some algorithm matched my personality to that of Freddy Krueger, the villain from the Nightmare on Elm Street movies. Freddy used a glove equipped with razors to kill people in their dreams, which subsequently caused their deaths in the real world. He also liked to cuss and laugh at his own jokes.

Well now…Perhaps there was something to these personality quizzes after all.

Armed with a newfound curiosity and a big tumbler of bourbon, I set off on a journey of self exploration, starting with the ubiquitous “what city should I live in” quiz which recommended I pursue a life of passion and vigor among all the other daydreamers in Paris. A Southern Living quiz suggested I might enjoy the artistic types in Nashville.

Speaking of art, this here piece of work doesn’t belong in the Louvre, but, rather, in a loo since one quiz termed me difficult to figure out and likened me to Marcel Duchamp’s “The Fountain.” As a font, I’m Helvetica—classic, perhaps a tad dull at times, sort of like the station wagon another quiz suggested I should be driving.

Were I a cheese, I’d be a brie.
Which dog? I shrug, they say a pug.
My spirit animal I had to know,
Turned out to be a big black crow.
Dad-like and a tad iconic,
Of course, I am a gin and tonic.
And, finally, should I even care,
As furniture goes, I am an armchair.

In today’s reality TV world, these personality quizzes tap into our desire to create a personal brand and biography. Who are you? What’s your story? Slap some social media on top and voilà you can proudly announce to the world that you are spaghetti with hot dogs, also known as fun and quirky.

None of this is new. Companies have been using personality assessments like the Minnesota Multiphasic Personality Inventory (MMPI) and Myers-Briggs for decades to help them predict which workers had the necessary traits to become successful employees. These types of tests are seeing a revival among employers today for two primary reasons: big data and analytics. And the belief that data crunching the responses to test questions asking if your parents praised you for your achievements or if you are energized by trying new things can determine if your personality fits the job you are seeking.

In case you’re wondering, Buzzfeed—the company behind the quiz madness— isn’t only about fun and games. A mashup of lists, quizzes, gossip, and news stories, the company calls itself the first true social news organization. Founded by the guy who helped Ariana Huffington launch the Huffington Post back in 2005, Buzzfeed already employs more than 900 staff in ten bureaus around the world and boasts 200 million readers each month.

Buzzfeed thrives on content that is sticky and contagious. It taps the power of social media and it makes sharing a key call to action. Unlike traditional media, Buzzfeed uses advertorial content, which is to say advertisers sponsor content. At the same time, though, the company has begun to hire good journalists, even a Pulitzer Prize winner, and is investing in more news, features, and videos. Its reporters, for example, are now covering politics and the wars in the Middle East.

Are quizzes, cat videos, and breaking news the future of journalism? Well, traditional media outlets are trying to replicate what Buzzfeed does. An article in The Guardian recently valued Buzzfeed at $850 million, which is three times what Jeff Bezos paid for the Washington Post. That certainly says something. The bottom line is that Buzzfeed, like Freddy Krueger, is a wonderful thing to some and a nightmare to others.

Now if you’ll excuse me, I need to go take the “Which Hot NFL Quarterback is Your Soul Mate” quiz because the answer, my friends, is germane to my existence.