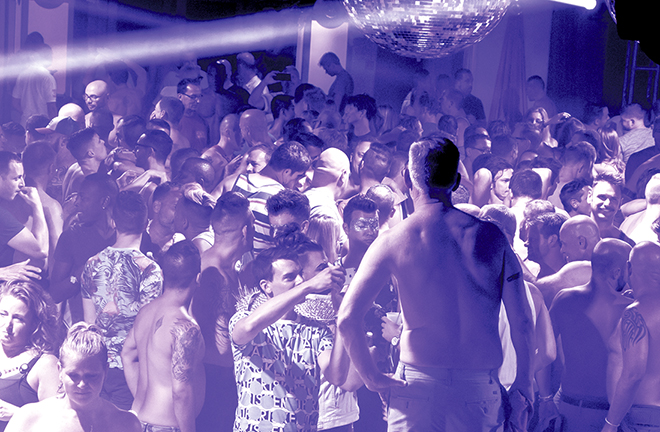 Remembrance...and Why We Dance

I found a movie for us to watch tonight,” Steve called out as I was cooking dinner. “It’s an Australian film about two guys who meet and fall in love in high school, and their relationship for the next 15 years.”

1976. As the film got underway the date of the opening scene flashed across the screen. Soon after, I realized that though the film was set halfway around the globe, it was about our lives, about our time period. It was about AIDS.

“Am I ready to go back to the 80s tonight?” I wondered to myself as the film—Holding the Man—really got going. I was already hooked.

With each passing year in the film, I couldn’t help but remember what we were doing at that same time. That’s when we met. That’s when we moved to New York. That was the year Douglas died; the year Jason died. That’s the year we started Sundance. The years rolled by: Dick and John and Michael, Chris, Randy, my college roommate Bobby; George, my unrequited love for my entire freshman year; our sweet friend John. So many more!

At the end of the of the film, I sobbed for a minute, for the sad story that I already knew so well, and for the suddenly released memories, long held in reverence and with a protective coating and an internal warning sign that I was venturing into melancholy territory.

I had not intended to write about AIDS in this Labor Day weekend issue of Letters from CAMP Rehoboth, meaning instead, to focus on the joyful fun of Sundance—it’s history, and music, and people.

Then I remember. They are the same.

1988. Sundance was born in the darkest days of the AIDS epidemic. It grew out of the frustration all of us felt at not being able to do anything to stop our friends from dying. The first Sundance raised $6,400 for Whitman Walker (DC) and HERO (Baltimore). Since that time, it has raised more than two million dollars to support AIDS programs and CAMP Rehoboth.

Over the 29 years that we have danced the Sundance, the event has become a Rehoboth tradition. Every Labor Day weekend we gather as a community to have fun, to socialize, and to dance. In the process, we celebrate and remember the lives of those who once danced at our sides.

In an upcoming Queery in the Washington Blade, I responded to the question, “What historical outcome would you change?” with the simple answer: “AIDS.”
HIV/AIDS changed our lives and our world on both a personal and a global scale. The numbers alone tell one story—more than 70 million people have been infected; 35 million deaths; 36.7 million people living with HIV. Another storyline emerges when we consider the enormous loss in the creative, talented people of a generation. We will never know the brilliance lost in the years before there was any hope of it being anything more than a death sentence.

Out of the devastation and loss of those early years in the AIDS epidemic, a new army of activists and organizers and fundraisers arose. As the AIDS crisis became more manageable, the lessons we learned from it were transferred to working for equality and health and wellness issues for the whole LGBT community.

1991. We founded CAMP Rehoboth 26 years ago, and I’m convinced we were able to do so because of the lessons we learned from the AIDS crisis. I always felt that with so many of our friends gone, it was up to us to carry on. We even had a t-shirt back in the early 90s that read, “CAMP and Carry On.”

In retrospect, we didn’t have a clue about what we were doing, but we had a vision and a mission, and we “carried on” until we learned enough to make progress.
2016. At present, the work of CAMP Rehoboth, expanded now into the CAMP Rehoboth Community Center, continues to serve the LGBT community, and as our mission has always called us to do, the greater community around us. AIDS testing and counseling and outreach, continues to be an important element of what we do, but it comes within the larger context of health and wellness for our entire community.

Funding for CAMP Rehoboth comes from many sources, including revenue from this magazine, grants, memberships, rental fees, donations, and events. Sundance continues to be our largest single event, and provides close to 20% of our annual income. Its success over the years has been vital to our organization.

The first Sundance was a tenth anniversary celebration for Steve and me, but aside from that, it has always been a deeply personal event for us. As chairs of the event for all of its 29 years, we are deeply thankful for the hundreds of Sponsors, Supporters, Hosts, auction donors and volunteers who make the event possible.
The first Sundance was simply a dance party, and while it was originally intended to be an outside event—and thus a Sun Dance—due to bad weather we moved it to the newly opened Strand nightclub on Rehoboth Avenue. Even as the event grew in size over the years, and we added an Auction night, the dance has continued to be the heart and soul of Sundance.

We are very excited that DJ/Remixer Joe Gauthreaux is returning for the second time to the DJ booth for Sundance XXIX. I have no doubt that he will create another magical night for us. His song “You are my Family” sums up the essence of Sundance.

Back in the early 90s our friend and Sundance volunteer Henry Eagle was spending his final days in the hospital. The last time we visited him, he was sitting up in bed listening to a little boom box. “I want you to hear this,” he said, pushing the start button. He closed his eyes, and the three of us sat and listened to the words of “I hope You Dance.”

So do I: for those who are no longer with us, for a brand new future, for hope, for joy, for family, for community, for CAMP Rehoboth, for ourselves.

See you on the dance floor, my friends.