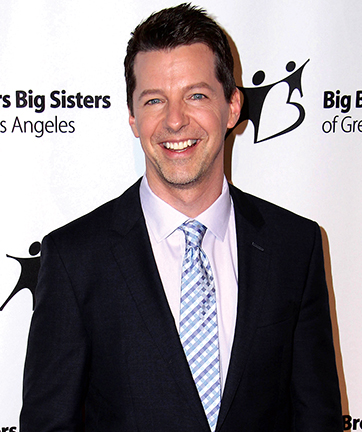 Sean Hayes will play the role of Hefty Hideaway Dress Shop proprietor Mr. Pinky and Rosie O’Donnell will play the gym teacher in NBC’s holiday season production of Hairspray Live!. The 1960s-set musical—based on the John Waters film—about a young Baltimore girl named Tracy Turnblad (newcomer Maddie Baillio) who dreams of appearing on, and then desegregating, a local TV teenage dance show, already features an enticing cast of queer audience favorites. Hayes and O’Donnell join Kristin Chenoweth, Dove Cameron, Ariana Grande, Jennifer Hudson and Harvey Fierstein (who’ll reprise his Broadway role as Edna Turnblad). In the wake of the ambitious and wildly successful Grease Live, the live-musical-on-TV genre was put on creative notice, so expect a lot of extravagant, inventive staging for this one. And while we’re on the subject of Broadway we can flop on the couch for, we would like to request Grey Gardens, Fun Home, Hamilton, and possibly Carrie. Not necessarily in that order, mind you, but at least before and/or instead of Les Miz, and Phantom. Please.

Rowan Blanchard taking a trip to A World Away

What kind of teen actor comes out in the middle of her tenure on a popular sitcom? The kind who grows up in an accepting environment that lets her know it’s fine to be exactly who she is. And that’s exactly the situation 14-year-old actor Rowan Blanchard is in. She stars on Girl Meets World as, you know, The Girl, and this year she made the decision to talk about her queerness as naturally and easily as a human being should be allowed to discuss the subject. There’s already some fan discussion on whether or not her character on the show should also be allowed to come out (though if she continues to play a heterosexual teen, to paraphrase Jerry Seinfeld, there’ll be nothing wrong with that). But in the meantime, the kid has a movie career to kick-start. She’s starring in the upcoming adventure film, A World Away. The plot revolves around six kids who take a trip to the Grand Canyon, but who then find themselves in what is being referred to as “a whole other world.” So… Land of the Lost? With some dinosaurs? Talking caveman-esque friends? Wherever she winds up on screen, this young woman is clearly on her way.

The Triumph of Colton Haynes

You knew Colton Haynes from Teen Wolf. Then you knew Colton Haynes from Arrow. Then you knew him because he came out. Then you knew him from that wild, unscripted moment when Noah Galvin from The Real O’Neals attacked him in an interview for not coming out the right way (and, come on, this is a far preferable set of circumstances than trying to figure out who to fake-hetero-marry to keep your career intact). So now Colton Haynes is working on making himself known to movie audiences in the upcoming teen drama Triumph. Yes, that title is the essence of corniness, especially when you learn that the plot involves RJ Mitte (Breaking Bad), an actor with cerebral palsy, as a teenager who must overcome adversity, join the wrestling team, and win over the girl of his dreams. But we’re going to give all of it the benefit of the doubt, if for no other reason than it’s long overdue that Hollywood stopped being so horribly ableist all the time and gave some leading roles to guys like Mitte. Haynes, it can be assumed, will play a friend or foe of the hero, possibly a fellow wrestler, maybe someone’s parent (he is nearly 30, after all, and this is Hollywood). Whatever happens, we’ll be watching.

You don’t know Ingrid Jungermann yet. That’s fine. You will. Her first feature, Women Who Kill, is bringing her film festival acclaim from Outfest to Tribeca, and her popular web series, F to 7th, is headed for Showtime. The half-hour comedy follows a young woman in her 30s navigating New York’s queer terrain, a cultural space where the old ways of being a lesbian have given way to newer understandings of gender and sexuality. The web series starred Jungermann—who has not signed on to appear on the Showtime version—and featured people like Amy Sedaris, Michael Showalter (Wet Hot American Summer), Gaby Hoffman, Olympia Dukakis and Janeane Garofalo. Jungermann will produce the adaptation alongside Showalter and lesbian filmmaker Jamie Babbit (But I’m A Cheerleader). It’s been way too long since Showtime gave us any women-who-love-women content to fill the dark, nonsense-shaped void left by The L Word, so really it’s about time. Hurry up and bring this to series, Entertainment Power Lesbians. We’re waiting.