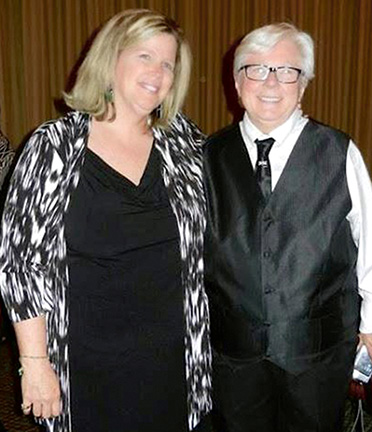 So here I am, trying on men’s dress pants for the Golden Crown Literary Society Awards ceremony, and I keep thinking of the photos of our people in Orlando. They dressed up too in their best freedom clothes, also anticipating an evening of togetherness. I’m grateful to be alive and able to gather with other gay women, while I can barely take in how many of us were killed, wounded, traumatized and experienced losses because of our gender preferences.

I’m reading about NYC Gay Pride. When I attended the early NYC marches, there was security, but nothing like what’s planned in 2016. Blocks and blocks are closed to parking. There will be thousands of officers on the streets, on rooftops, in the air and in boats. My biggest fear in the early 1970s was that my mother would see me on TV and I’d have to deal with laying that trip on her.

Yet ever since the 1980s, when the right wing decided it would be politically expedient to build their power base by turning us into a featureless symbol against whom multitudes of non-gays could unite, I have expected mass killings. We’re natural targets for people taught by their religions that their deities find us an abomination.

The horror of that Central Florida night brought back the general horror of gay bars for me. Like whole neighborhoods that house other minorities, the bars pen us in one place where we are queer ducks—queer sitting ducks. Orlando was a pogrom, “the organized killing of many helpless people,”* in this case organized by a stealth enemy that turns people like the deeply conflicted, unstable shooter into murderers.

I think affectionately of some gay bars—I got to wear freedom clothes there too—but I also remember the horror of them. They were a nightmare then, they’re a nightmare again. Yet I thought of them as fun. Didn’t we all? I loved being with other gays, but drank to tolerate the demeaning conditions of our loud, cold, dirty, dangerous pens.

Truth be told, I’m a wallflower by nature with seldom enough self-confidence to ask a woman to dance. Even with the drink in me and a cigarette going, the bars bored me silly. Any excitement came from dancing with my partner and being surrounded by our kind.

The gawking het couples on dates who came to laugh and stare at what to them was a grotesque sideshow, the ones who always managed to get tables because they knew the owners of the joints while we stood around without a place to set our drinks, degraded, intimidated and antagonized us, their very presence a warning that we danced to their fiddle. My rage at them continues to this day and fuels some of what I write. It’s due to the gentle nature of our people we are the victims of violence and our tormentors get off scot-free.

I expected such an attack on LGBTQ people at least since the night, in the mid-1970s, when my friend and co-worker Carm was shot outside Partners Cafe in New Haven, Connecticut. Carm was walking to his car when out of nowhere, someone started shooting from a moving vehicle. Young, handsome Carm got a bullet in the arm. Now I’m only surprised at the infrequency of the attacks.

I am surprised that a gay bar has been designated a National Monument. This is only one of many such dichotomies. We’re central to the frightening divide between U.S. voters, which only confirms how powerful we really are.

It’s fitting that our monument should be a bar. Human communities form where they can, spontaneously, and eventually develop traditions. Hellish as they can be, at times they were glorious, glorious! The music may have been loud past bearing, but we danced all night! Under the glitter balls we saw ourselves reflected in our peers like nowhere else. I was not the only shy one and eventually a few strangers would become friends, friends grew to circles. With a gay bar nearby we never needed to be totally alone.

A night at the bar was always a celebration. Angry, estranged, alcoholic, festive—companionship was there for the taking. Danger united us, as it does still.

There will be increased security at venues and events like the one I’m headed to. I’ll be wearing my dress-up pants, shirt, vest, pocket square and tie. Others will be in alluring frocks, and a number in their full-dress U.S. military uniforms. Day by day, more and more people condemn atrocities against LGBTQ people and other minorities and we are stronger for every changed mind.

I will remember the beautiful, proud and daring men and women who were attacked that nightmare night in Orlando, every time I don my glorious freedom clothes.