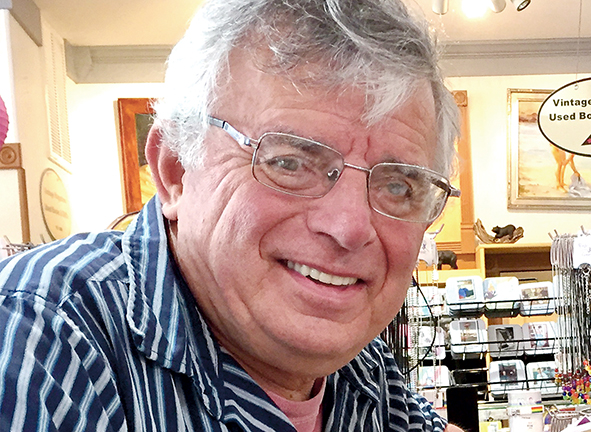 Farewell to Jocques but Proud Bookstore Will Keep Sharing the Pride!

When the old Lambda Rising Bookstore, based in the courtyard by CAMP Rehoboth, closed down in 2010, after 19 years, bookstore manager Jocques LeClair knew Rehoboth still needed a gay book and gift shop.

So he dove in heart first and opened Proud Bookstore a little further down the block on Baltimore Avenue. At the time he said, “There was a steady clientele that’s been coming here for 19 years. Why not take care of them? I decided, instead of disappearing, why not just reopen?”
In a world where gay bookstores were quickly disappearing, the new Proud Bookstore was a glaring exception—a fresh venture which filled a need for Rehoboth locals and visitors, along with giving a boost to the ever-burgeoning flock of LGBT writers and publishers.

And oh how it has! With books, greeting cards (including a fabulous line of gay-themed cards), CDs, t-shirts, artwork, gifts, and holiday ornaments, the store is beautifully merchandised and a terrific place to shop.

But for Joques, things have changed, and by the end of the year, Jocques will be retiring and moving on. Luckily for Rehoboth, the bookstore will live on, with new, equally committed owners (details on this news to be released shortly!).

But in the meantime, it’s fitting to celebrate Jocques, because it was a daring and impassioned thing that Jocques, and his late partner Tom, did by firing up the business and making it work.

Acknowledging that the store was part retail, part gay chamber of commerce, and part question central. “It’s a feel-good business,” he says. Jocques recalls visitors with no knowledge of town, or folks questioning their sexuality, or just lonely people stopping by looking for information on the gay community. “First thing I’d do was show them the stack of Letters from CAMP Rehoboth and point out the calendar and resource pages,” Jocques says.

Not to say that the clientele was always LGBT. Many hetero locals and visitors looked to Proud for gifts, greeting cards, and best-selling books that could also be found there.

“I remember a young straight couple coming in and looking around, with the man coming up to me and asking if it was alright to be in the store,” laughs Jocques. The man learned that not only was it alright, but he was most welcome. That couple became loyal customers.
Over the years, Joques made sure that Proud participated in community events such as Delaware Pride held at Cape Henlopen State Park and CAMP Rehoboth’s Women’s FEST each April. Not only did Proud host book signings with visiting authors on that annual weekend, but all through the year.

Local writer and published author Rich Barnett held a Bastille Day party at Proud with his first book and launched his second book last summer at Proud. For this writer and many of my colleagues, Proud was and continues to be an outlet for great sales, a place to do book signings and so much more.

This coming holiday season, Jocques is hoping to see a lot of his regular customers come in and visit. Some of them, he says, come by just to visit with Proud’s official greeter and proprietor Toby the cat, who, according to Jocques is, “Very social.”

With retirement and relocation looming, Jocques is delighted that he’s been able to call Rehoboth his home for the last 25 years. Originally starting his retail career in Gettysburg, PA as a florist, Jocques continued in that career when he first moved to Rehoboth. He worked at South Pacific Florist with the legendary Gabby Beal. In those days, the LGBT Strand nightclub was still on Rehoboth Avenue, and the town was less crowded but still had a huge gay population.

“That’s why I knew that I had to open Proud when Lambda Rising closed. I knew we still needed a bookstore here.” And now Jocques is proud himself that his store is one of only a dozen or so remaining gay bookstores in the country—and that the tradition will continue.

But he also realized that when his partner Tom passed away a year and a half ago, running the shop by himself was lonely and no longer fun. So now he is set to retire and return to Gettysburg where his adult children live.

But we cannot let him leave without his knowing what a huge impact he made on so many lives here in Rehoboth.

According to CAMP Rehoboth’s Steve Elkins, “Jocques has not only been our go to store for books and other LGBT merchadise, he has been an integral part of the LGBT life in our community. Even with Proud staying open, Jocques will be missed by all of us!”

Jocques’ willingness to launch Proud Bookstore made US proud of HIM and we send Jocques and Toby off to retirement with love and much gratitude. Au Revoir, Jocques LeClair. Come back and visit!

Proud Books is located on Baltimore Avenue in the Village of the Sea Shops. For more information, call 302-227-6969.