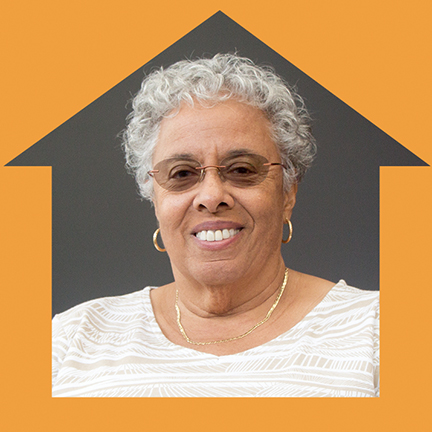 Sharon Bembry was born and raised in the Georgetown section of Washington, DC. When Sharon was 18 months old, her mother passed away and she began living with her Aunt and Grandmother. Sharon loved living at her Grandmother’s house because it had many places where she could hide. Recently, she went back to Washington and wanted to know if her Grandmother’s house was as she remembered it. To her great surprise, it was. She says she was reminded of all of the wonderful times she spent there.

At the age of 10, Sharon’s father remarried, and soon after, she began living with him and his new wife in Fairmount Heights, MD. That’s when Sharon became a lover of music. Her love of music came from her father who was a huge jazz buff. They would sit together in the basement rec room for hours listening to music.
For 32 years, Sharon was employed by the Upper Freehold Regional School District in New Jersey. She was their first ever Attendance Officer, and was responsible for both the elementary/middle school, and the high school. Upon arriving on her first day, she was given a desk, a telephone, and a list of students who were absent for the day.  She asked herself “now what?” When she began doing home visits, she would get an address that looked like this: RD2 Box 265, New Egypt, NJ. She said to herself "What the hell is an RD2?", and where is New Egypt, NJ? After many trips up and down various roads she found herself stopping at the local post office to get directions. Back in 1976 this District was mainly farm land, and often the children who were absent from school were kept home to help out on the family farm. Another part of Sharon’s job was something she disliked. She would have to appear in court against the parents who failed to send their children to school. Later, as technology moved ahead, Sharon helped to develop and set up a computerized program to automate phone calls to parents during the evening instead of during the day, because, as you can imagine, the children could (and probably did) erase messages.

The pride and joy of Sharon’s life are her two sons, Joe and Eric, and her five grandchildren. Her son Joe has two children, Isaiah, 19 who is attending Montclair State University, and Alaia–3, with his wife Kerin. Her son Eric and his wife Jenny have three children, Adriana–8, Devin–6, and Brooks–3.

In 2006, Sharon met the love of her life, Lois Powell through mutual friends at a garden party in Brooklyn, and for her, the rest is history!

Sharon’s hobbies include listening to her favorite girl group The Chantels, Mahjong, and dancing. She LOVES to dance!

Prior to my move to Rehoboth, I was always attending functions sponsored by CAMP. Through my friendship with Kathy Wiz and Muriel Hogan, I was encouraged to start volunteering. I must say it has been a very rewarding experience.

I have been involved in a lot of different activities and events. I have done mailings for many of the events at CAMP Rehoboth, worked at the Food Bank in Milford, worked with the kids from Burton Village, and I always volunteer at World AIDS Day.

My best memory is working with the kids from Burton Village helping them make Christmas cards for their parents. I enjoyed teaching them to work together.

My favorite is the World AIDS Day Walk and Service of Remembrance. The walk starts at the Rehoboth Beach Bandstand and ends at All Saints Church. I am one of the volunteers that read from a list of those who lost their battle to AIDS. It is such a heartfelt, peaceful, and serene experience with all of the candles glowing.

Favorite season here at the beach?

Spring is my favorite time of year because the weather starts to change, and it’s the “calm before the storm” of visitors and traffic to the beach.

My mentor would be Mr. Robert Fuller, my music teacher in seventh grade.  He was encouraging and saw that I had a lot of musical potential. So, when I went to Howard University I majored in Music Education.

If I had an extra hour in the day, I would use it to do more volunteering in the community.

I am an early riser.

The best year of my life was 1981. That is the year I came out, found a wonderful gay community, and I found tremendous support from many of my straight friends.

As a lesbian in my 70s, I didn’t think I would see the progress that has been made in the LGBT community. When I came out in the early 80s, working in the public school system and having close contact with students, you dared not open your mouth. It was definitely taboo. Now, you can be openly gay, and have health insurance for your domestic partner or wife husband.

I am extremely concerned because our current President has already rolled back the option of transgender people who want to join the military, and to those currently serving in the military. In addition, the current administration is trying to take away the right for the LGBT community to marry, and in some states adopt children.

I began coming to Rehoboth in the early 80s around the same time I came out.

First of all, the creation of CAMP Rehoboth with the many activities and programs that support the community as a whole. Second would be all of the residential developments and all of the traffic they have added to our town. This used to be a quiet little town, now there is something going on almost every month of the year.

First would be coming out in 1981, and having the amazing and supportive friends gay and straight. Second would be finding the “love of my life” in 2006. Third would be moving to Rehoboth in 2011 to be with the love of my life.

If I had to choose, I would choose New York City, the city of lights. It has so much culture, wonderful concerts, museums, amazing restaurants, and last but not least, the theatre.

Christmas is my favorite holiday, seeing glee and the excitement in the eyes of my kids when they were little, and now seeing the same kind of excitement in my grandchildren’s little faces.

I am most thankful for my amazing sons who have always been very supportive of my lifestyle. They love Lois and treat her with the same love and respect as they do me.

Sharon, I guess the next time we see Kathy and Muriel we need to thank them for bringing you into the CAMP Rehoboth family. But, right now, we want to thank you for the time you spend volunteering for us, especially the time you spend working with the children at Burton Village helping to shape their lives. As the Whitney Houston song says, “The children are our future, keep them well and let them lead the way.” We are amazed to have generous community members like you. Your dedication has helped CAMP Rehoboth continue its vision and mission, and we appreciate all you do.