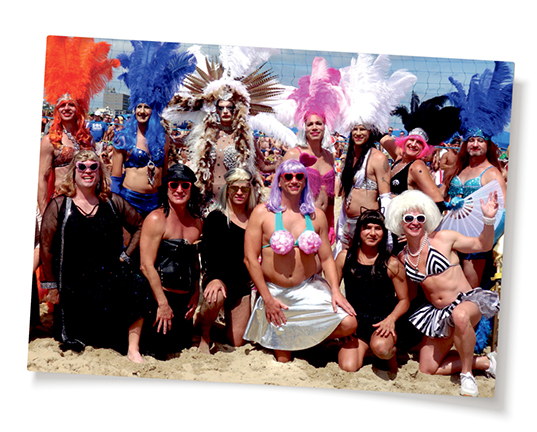 Labor Day weekend is in sight, and along with Sundance, the other legendary event is the Sunday (this year, September 2) Drag Volleyball Game.

It’s always a combination of campy and sporty on Poodle Beach. There are two long-time volleyball squads, mostly but not exclusively men, practicing their game and planning high heels, high hair, and reminiscing about their improbable 29-year history of drag volleyball. And they are at work, right now, thinking about spikes—both heels and volleyballs.

The infamous event boasts often hand-made and uproariously hilarious costumes, coordinated song and dance routines, and a lot of satire. Maybe we will get some biting political satire this year as the athletes/drag queens square off.

With speakers blasting music—lots of disco, lots of showtunes—and thousands of onlookers lining the boardwalk and standing or seated on the sand from Prospect Street to (how appropriate) Queen Street, it’s a blast. City police officers guard the dunes—and enjoy the game—as the entire beach comes alive with spikes, serves, cheers, dancing, and the occasional very naughty sight gag.

The team entrances from the boardwalk are legendary in their audacity and fun quotient. Letters interviewed some of the players and here’s their take on this amazing tradition. 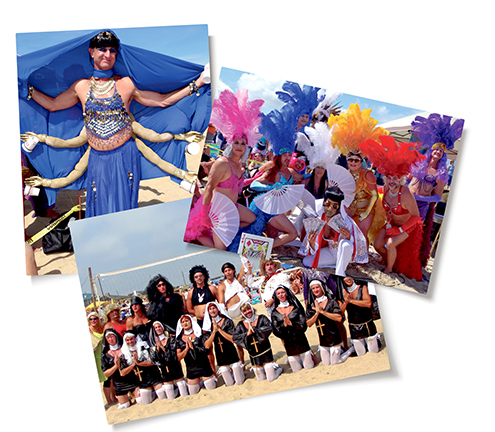 Letters: How many years have you been playing/performing?

Darryl M: My first year on the team was in 1995. I have played every year since then except for two. One year we didn’t play because of weather, another year I was unable to play due to family obligations.

Mark Kimble: I am one of the few originals still playing. It all started in 1988, when Flo (Forrest Park), brought some wigs and women’s bathing suits down to the beach on Labor Day weekend. I was asked if I wanted to do it. Believe it or not I was only 18 years old and had never done anything like this before, but I’m willing to try anything. So I said yes. We changed in the middle of some blankets and then came out. I was really surprised when the entire beach came over to watch. There was no music just catty comments. Now you see how it has evolved.

Tony Watkins: This will be my 20th year.

Letters: How did you first get involved?

Darryl: My first summer at the beach was in ’94. I played every weekend I was down. When it came time for the game in ’95, one team needed an extra person so I was asked to play. Since the beginning there have been two teams. When someone leaves the team, the team then votes and picks a replacement.

Tony S: After playing volleyball with the ladies my entire first summer here, they asked me to join the “cast.”

Tony W: I was first asked by one of the teams to play because they kept losing to the other team. I had been playing volleyball for a while and was rated AA. After about three years of being asked, I finally agreed to play. My first year was Madonna, and I was very nervous since I had never done anything related to drag. That year we won and I have been playing with the team ever since.

Letters: What’s your favorite part of the entire experience?

Darryl: Of course, playing the game and performing are great, but what I enjoy most is Sunday night. Most people probably do not know that after the game, both teams get together for a little bonding time. We watch the game (which is always recorded), have a few drinks, dessert, and give out trophies for crowd pleaser, MVP, and best outfit. The winning team gets the bigger trophies.

Tony S: The reaction from the crowd, it’s great that so many people love it so much.

Mark: I love doing it for all the people that come watch. It is so fun just making people laugh.

Tony W: A lot of work goes into each year, from coming up with the theme to practices (which are many), to the actual performance. The best part is watching each player develop through the years and get into their character. For me, the best part is actually playing volleyball in front of the crowds and showing them we are volleyball players who play in drag and not drag queens who play at volleyball.

Letters: What was your favorite costume or skit ever?

Darryl: Hmm, there are been so many I’m not sure I can pick a favorite costume. I have ranged from Miss Universe, to a pregnant welfare Barbie, through the different stages of Madonna, Cher, and Lady Gaga, and from a Hindu Goddess belly dancer with multiple arms to a Las Vegas showgirl. The imagination is amazing. As far as skits go, the dance captains of the team (one plays with us, one is an “athletic supporter” on the sidelines) always go way above what is expected. The one that sticks out is the year we did the USA Synchronized Swimming team (I think it was 2004). The opening number was “One Moment in Time” by Whitney Houston and included sign language, balloons, and hula-hoops for the Olympic rings. The routine during the game performed to Björk’s “It’s Oh So Quiet,” and had the team unveil a huge blue tarp onto the court which we “jumped” into and used as “the pool” for our synchronized swim. It was amazing.

Tony S: My first year we did Truvy’s beauty shop girls and doused a teammate with a five-gallon bucket of cold water shouting “Drink your juice, Shelby!”

Mark: There were so many skits, I have a hard time picking just one. The bridal party was great. Hard to find bridesmaid dresses in rainbow colors in big girl sizes. Love the Michael Jackson theme the year he died and poor Farrah got overlooked. Doing Thriller was great. The Von Tramp family with Maria’s entrance from the dunes to “The Hills Are Alive” was perfection. Love the trailer trash introductions.

Tony W: It is hard to name which one is my favorite because there are so many great themes. But if I had to choose, it would be the Synchronized Swimmers skit and the costume would be from Geisha Girls.

Letters: What do you want readers to know?

Darryl: It has been an honor to be able to play this game with these individuals (both teams) for so many years. It’s something I will always treasure. If you play with us during the year you will see we can be very catty but we are also very close and support each other. However, we are all getting older and we need new talent. Drag Volleyball has been around for almost 30 years. If you like to play volleyball and entertain people, come play during the summer with us. One day, you might be asked to join a team. Don’t let us scare you off. We really don’t bite. (Well, Myrna might.)

Tony S: It’s even hotter than you think under those wigs!

Mark: I just want everyone to know that as long as people come watch I will try to continue to put on the show.

Tony W: A lot of work goes into each year by our team but it is well worth it once we see how the crowds totally enjoy the show, and it is a continuation of what has become a Rehoboth Labor Day tradition.

Letters: Come see what the themes and costumes are this year. To get a good spot, gather early on September 2 at Poodle Beach. It’s always a great game and a really good time. ▼