All about the Delaware Botanic Garden 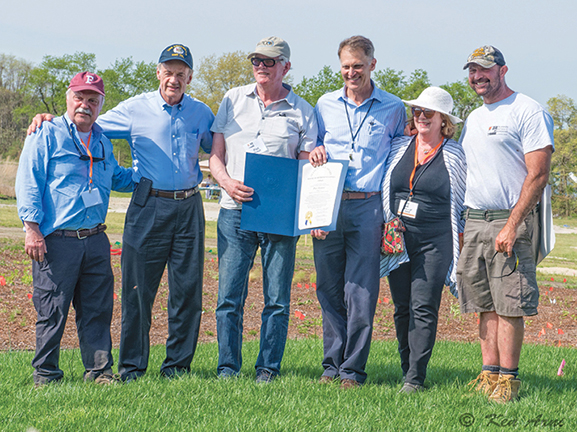 The official groundbreaking for the former Dagsboro farmland—but now 37-acre Delaware Botanic Garden (DBG)—was in December 2016. Within the natural beauty of the 12-acre Woodland Garden on Pepper Creek, paths were cleared and native trees and plants added.

But the gardens were still mostly a vision and some wonderful sketches of a “garden to be.” Thanks to volunteers and some hard work, the DBG is scheduled to open to the public in 2019.

In September 2017, the first phase planting in the two-acre Piet Oudolf Meadow Garden was completed. Piet Oudolf, the internationally renowned Dutch Garden Designer, supervised the implementation of his vision on his third visit to coastal Delmarva. While Piet was here, Adrian Higgins, The Washington Post’s Garden Writer, visited this first phase planting with Piet as his guide. Adrian later wrote, ”If cultural institutions were boxers, the Delaware Botanic Garden would be Rocky Balboa, an underdog with a seemingly uncrushable spirit.” Walking the meadow site with Piet, Adrian reported that Piet said: “The garden scene here is small. But, so much energy! It’s unbelievable!”

The energy he was remarking upon was not that of the native plants; rather, it was that of the hundreds of volunteers who are bringing the gardens to life. The garden volunteers are Delmarva residents, joined by others from the horticultural industry, and people from other area public gardens who want to be part of the “birth” of a new public garden. DBG President Ray Sander said, “This is truly a community garden. We could not make this journey without our dedicated and passionate volunteers.”

In April 2018 the DBG was in the spring Garden Design Magazine. Therese Ciesinkki wrote, “Delaware Botanic Gardens at Pepper Creek is a lesson in how a small group of people can make big things happen.” 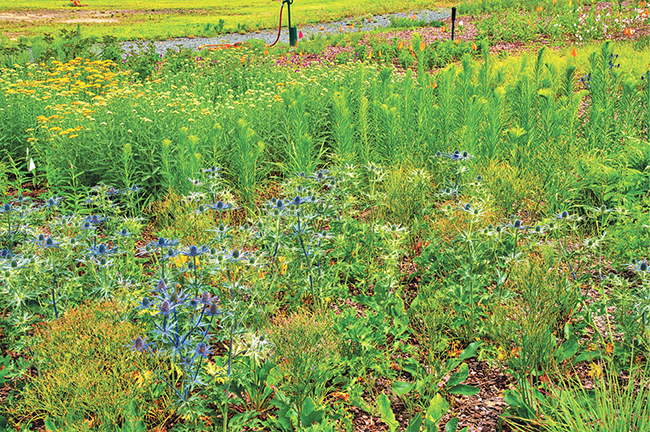 In early May Piet returned to observe the second phase of planting of 18,000 new plants and on May 4th, the DBG first opened to the public for a “Sip & Saunter” event. Over 130 garden enthusiasts were joined by local leaders including U.S. Senator Tom Carper and State Rep. Ron Gray.

Rep. Gray presented Piet with a proclamation from the Delaware House of Representatives, which stated in part, “The House of Representatives acknowledges Piet Oudolf, designer of the Meadows at the Delaware Botanic Gardens...for creating a magnificent two-acre Meadow.... We commend Mr. Oudolf for his creative genius and his leadership in demonstrating the vital importance and beauty of native species. His Meadow at Delaware Botanic Gardens will be a major attraction to the citizens of our state as well as contribute to Delaware’s quality of life and economic vitality.”

Starting a botanic garden from scratch is expensive. DBG Executive Director Sheryl Swed points out that it is a constant challenge to find the sponsors and donors who are key to building the gardens. She said, “For example, Dogfish Head Brewery is the sponsor of the Learning Garden, including the Wetland Outdoor Classroom. We are thankful for the continued support of the public and our Delmarva business community.”

There are now 70,000 perennials and grasses, with 85 percent native plants and 15 percent pollinator compatible exotics in the meadow.

On Thursday September 6, 2018, the Delaware Botanic Gardens will hold its Annual DBG Fundraising Dinner for the first time at the actual DBG site. Sponsors like Dogfish Head Brewery and Bank’s Wine and Spirits, plus catering by SoDel Concepts, are involved. This will be the first major public opportunity to view the just-completed Meadow planting. The event is open to the public, and sponsorship opportunities and tickets can be purchased on their website.▼

Brent Baker serves as a board member for the Delaware Botanic Gardens. DBG Volunteers are needed. Sign up on their website.
Top photo by Ken Arni, bottom photo by Ray Bojarski