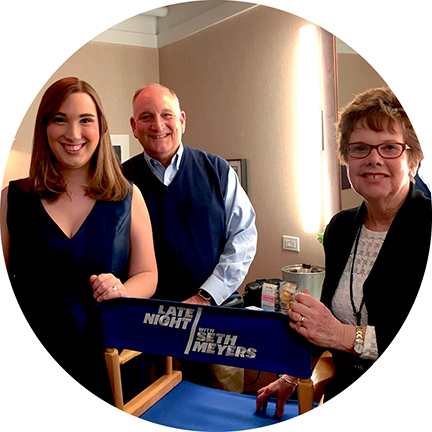 Sally McBride set the oven on preheat at 425 degrees to begin Christmas dinner. She turned around, startled to find her child had followed her downstairs. And her offspring was on a mission.

Though Sarah McBride had nervously rehearsed this big reveal in her mirror for years, to Sally it seemed so matter-of-fact. That's because it was, indeed, simply, a matter of fact.

"Our eldest son, Sean, had come out as gay years prior, and Dave and I felt we had an immediate handle on his situation. We had plenty of gay friends and we knew they were happy and led fulfilling lives. But we knew no one who was trans. I was flummoxed. I was scared and I own that," Sally recalls.

The "G" for gay was a bit of a breeze. But the "T" for trans was quantum physics. In time, the McBrides would get an A+ nonetheless.

In her blunt, heartbreaking, and heartwarming autobiography, Tomorrow Will Be Different, Sarah McBride describes the Christmas Day drama that ensued. Sally, in shock, ascends the stairs to Dave's office, where he and third son, Dan, are working. Dave reacts similarly to Sally. They nervously call Sean, and he and his husband, Blake, jump in the car to drive from Manhattan to Delaware, Blake behind the wheel and Sean getting ahead of the information curve. He googles "transgender" like a madman so he can help the woman who is now his sister.

It took the sole straight sibling, Dan, to break the ice. "I'd like to announce that I'm a heterosexual."

The village that enveloped Sally and Dave in love is one for the history books. Dave recalls, "Our pastor reached out to his predecessor, who knew a transgender woman and her parents. They arranged for us to meet and the fear began melting away almost immediately."

Delaware is so small that the first state's family tree doesn't fork. It's more like a wreath. There's zero degrees of separation. When she was eleven, Sarah asked then-Senator Joe Biden for his autograph. Done. Then, she asked Sally and Dave for a podium, so she could practice political speeches. Done.

Sarah’s involvement in Delaware politics from that very early age landed her in a circle of mutual admiration with the likes of Joe's son, the late Beau Biden. According to Sally, it’s impossible to credit Beau enough for what he did for Sarah and her family. It is the ultimate embodiment of our straight allies. And here's where ParentGood kicks in for the Bidens. As Sarah puts it, the vice president raised Beau "…to love without hesitation." Just grab a hanky and read the book.

No one remembers who turned the oven off that Christmas day. But after plenty of discussions and research, not to mention time to absorb the situation, Dave and Sally defied the cliché that if the heat's too hot, get out of the kitchen. They did the opposite. Soon, they went from their house in Wilmington to the State House in Dover to testify for Sarah's right to be Sarah.

Who in the world knew back then that in 2016 Joe Biden would be backstage at the Democratic National Convention as the sitting vice president when Sarah McBride would take the real podium as the first transgender American to speak?

With innate talent and outward pride, she took that podium in the packed Freedom Hall in Philadelphia. When Joe had signed his autograph to her way back when, he'd written "Remember me when you're president.”

And now, Sarah was her full, authentic self.

Taking the stage at the Convention, Sarah first saw her parents under the Delaware banner. Unlike rehearsing solo in a mirror, or gaining love and acceptance from our tiny but mighty state, this time there also were 49 other states. So, for the Democratic delegates from crimson red Alabama to cobalt blue Massachusetts, she delivered a resounding message of equality.

Months later, in a bittersweet moment revealed in her book, after Beau Biden’s passing, Sarah saw the vice president at a reunion of White House progressives. It was a goodbye party at the vice president’s residence after the cataclysmic election, but before incoming Vice President Pence moved in. Sarah asked Joe Biden to write the foreword to her book and he was delighted to comply.

As that book wraps up, Sarah meets a transgender youngster named Lulu.  Lulu's mother had sought Sarah out to connect with them. (Give that woman a PhD in ParentGood.) The young girl asks Sarah what her favorite part of being trans is. OMG …out of the mouths of babes! Until then, even our heroine Sarah had focused mainly on survival and her scars from the political battle of the bathroom laws. Sarah smiled, took a deep breath, and answered Lulu: "Meeting people like you!"

Thanks to people like the McBrides and the Bidens, no matter what lemons are tossed at Lulu, her allies will help her make some very sweet lemonade.▼

Brent is a Cajun transplant from New Orleans who tries his/her best to make life better for NextGen QueerFolk.