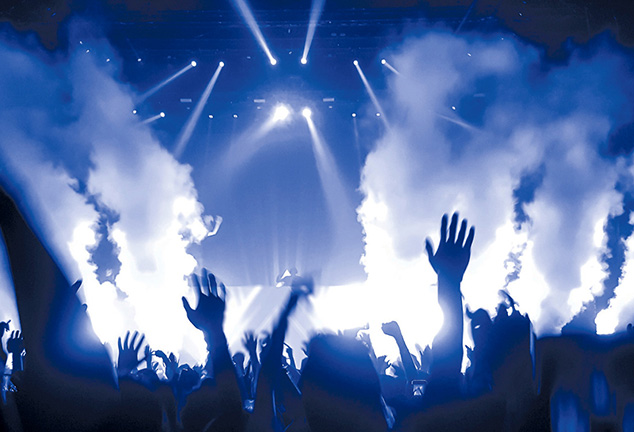 The soundtrack of my love life as a full-grown gay man was written by a 21-year-old woman. I’m 35, so this is slightly concerning to my queer confidante. He doesn’t think I need to try to make myself any more available to the Snapchat demo who adorn their faces in cat whiskers and dog snouts. He demanded I “get off Grindr” at a recent Lorde concert in Detroit, rightfully fearing I may end up part of the broken hearts club—been there, done that; he knows—thanks to what Lorde has aptly deemed the “L-O-V-E-L-E-S-S generation.”

My first Lorde concert was a sea of rainbow after a glitter storm; the Motor City’s queer collective appeared to have been summoned by collective Grindr heartbreak, shared interest in defiant Lorde-like dancing, and the New Zealander’s basically perfect album, Melodrama.

Her follow-up to 2013’s Pure Heroine spoke to me as a hopeless romantic who has turned, thanks to our modern dating era (or whatever we’re calling it now) and its ADD culture, into a love cynic.

The frustrating pangs of an opera grad student who won’t commit to in-person hangs but lingers from a distance with Grindr taps and messages, even though he has my actual phone number. Or the “emotionally unavailable” one. Or the one I kissed too soon. Lorde’s Melodrama album actually has nothing to do with these, or any of my latest dating fails. But Lorde knows when it comes to love, I’m the problem, she’s the problem, you’re the problem. We’re all the f'ing problem.

Lorde in concert is a triumph of spirit and solidarity, with hordes of cool people (cool because they also like Lorde) collectively reveling in a wise-beyond-her-years musical mastermind who just last year, in June, released the Modern Love Bible. AT THE AGE OF 21. She wrote an entire anthology on why love’s a little bitch (except when it’s not).

The songs she sung that night in Detroit spoke to 8,000 people who have lived the very deeply felt lyrics Lorde once typed into her iPhone Notes app. In the context of the show, “I think that you might be the same as me, behave abnormally,” a line from the show’s opener, “Homemade Dynamite,” resonated with a fresh sense of unity in a space where queers came to fume together, cry together, and move on together.

For me, “Supercut” called to mind memories of last year, when I met a man in Palm Springs and took a whirlwind trip to Seattle to see if our budding romance could bud further (it didn’t). Lorde danced on stage, my mind danced back to that bittersweet bop being the theme for the weekend and its every fleeting moment.

“Liability” presents dating woes with even more glaring matter-of-fact clarity: “The truth is I am a toy that people enjoy till all of the tricks don’t work anymore and then they are bored of me.” You know she knows she’s not alone.

Watching queers hang their arms over their friends’ shoulders during “Perfect Places,” with Lorde—again, just 21—lyrically contemplating our endless quest for the magic answer to contentedness in life and love, was pure exhilaration. Affirmation, even. If perfect places are created by those in them, this was such a place.

“But when we’re dancing, I’m alright,” she assured, dancing. Earlier, she performed a cover of Frank Ocean’s own ode to human connection, “Solo,” as if to emphasize the significance of finding our people—or a person. I think I found mine that night, as romantic love and the weight it holds on Melodrama took a backseat to all the other ways—lasting ways—love can blossom. I didn’t know it, however, until I was letting myself feel everything in a mix of freestyling queer men and women, some older than me, most younger. Suddenly, the album’s heartbreak seemed less heartbreaking; here I was in a buoyant not-so-loveless space with people (other Grindr users even!) who’ve all felt Lorde’s pain on her morose elegy “Writer in the Dark” and wandered aimlessly through love, waiting for our green light, and then, yes, kept going.

That night, I came to get my heart broken. But instead, the maddening thought of romantic love evaporated, and loving gestures surrounded me. With the Melodrama album singing me home, I left enveloped in them—dancing, and feeling alright.▼

Chris Azzopardi is the editor of Q Syndicate, the international LGBT wire service. Reach him via his website and on Twitter (@chrisazzopardi).