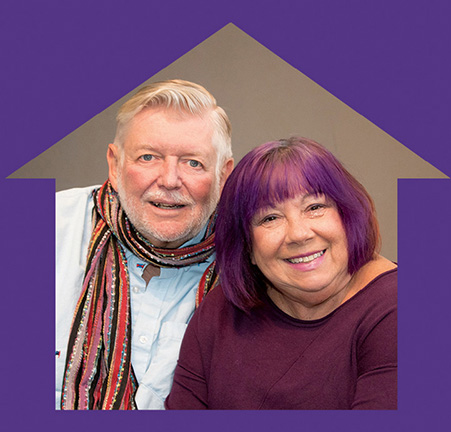 She acted and directed for Altoona Community Theatre, and served as Dialect/Accent Coach for many theatre productions. In addition to volunteering at CAMP Rehoboth, Patricia is a Board member of the Aspen Meadows HOA and on their Activity Committee. She also volunteers at Immanuel Shelter, and is a Mentor for Delaware Breast Cancer Coalition. When Patricia isn’t volunteering, she loves yoga, travel, reading, singing, and going to the theatre.

Russell Stiles is from Cresson, Pennsylvania, has a BA in English Education from St. Francis University, and studied theatre at Penn State University. Russell retired in 2016 after a 30-year career as a teacher of acting, drama, and directing in the Hollidaysburg Area School District.

Patricia and Russell served as Teacher Leaders for student educational travel with American Council for International Studies (ACIS) for 25 years; accompanying more than a thousand students and adults on educational and service learning trips to over 10 countries in Europe, Central America, and Asia.

Although they grew up just a few miles from each other, and had mutual friends, they did not meet until 1976. While living and working in Texas, Russell came back to Pennsylvania to visit family. He attended a local summer stock theatre production and was swept away by one of the leading actresses. Of course, it was Patricia.

According to them, the time was not right, but six months later, when Russell returned home for good, they had a chance meeting. Russell wasted no time in acknowledging his love and respect of her vast acting talents. The rest is history!

In 2016 when we moved to Rehoboth full-time.

Patricia: The Block Party. It is such fun to see the entire community participating in this festive street event! The entertainment is always so good. Celebrating with CAMP Rehoboth members, other area residents, and visitors really demonstrates that Rehoboth has “room for all.”

Patricia: My Aunt Bette, with whom I spent a great deal of time when I was a child. She was very interested in theatre and travel. She was a teacher who loved the beach, and would take me to Wildwood, NJ in the summer; we would go together to see theatre productions, and then act them out with costumes she had in a trunk. She would bring me souvenirs from her travels, and encouraged me to “go places.” She would pick me up in her little convertible and we would just ride! I could not wait to be in the fourth grade when she would be my teacher. Unfortunately, she died of cancer the year I was going to be her student. However, her influences survived—I became a teacher, who also became an actor/director; I have traveled all over the world, and many times as I am zipping through our beautiful beach community in my convertible, I imagine Aunt Bette is in the back seat.

Russell: My Aunt Marie. She introduced me to travel, art, and music.

Patricia: When one is a teenager, one tends to always be thinking ahead—“I can’t wait until…”—consequently, one misses the beauty in each minute as one anticipates the next. As I have gotten older, I have learned that RIGHT NOW is very important. I make the effort each minute to celebrate and not squander it by looking ahead. In the past year, I have become more aware as I have lost several good friends I thought I would have for many more minutes. If I could talk to my 18-year-old self, I would encourage her to celebrate the present, as the future has no guarantees.

Russell: I wish I had learned at a much earlier age to trust my heart much more than my head.

Patricia: I think my LGBT heroes are my many former students who had the courage to come out, despite living in a very conservative, rural community. The other heroes are their classmates and friends who loved them, supported them, and defended them. As the “drama diva teacher” at my school, I rather attracted those kids who were struggling to find themselves. During the early years of my teaching career—in the late 80s and early 90s, these kids really struggled with coming out—and many didn’t, out of fear of rejection and reprisals. Then, little by little, even in my very conservative area, a few kids had the courage to come out, and surprisingly, they found allies and supportive, loving friends. By the last six or seven years of my teaching career, when kids came out, for the most part, the response was “ok, so you are gay/lesbian, the IMPORTANT thing is what sports team/video game/music do you like?” Even in my somewhat “redneck” school, kids felt comfortable coming out! I never thought, in my lifetime that two boys slow dancing at a school dance would not even raise an eyebrow! To many young people, being LGBT is a non-issue, and I think that is wonderful.

Russell: I have come to admire Emma Gonzalez from Marjory Stoneman Douglas High School who helped start the March for Our Lives Movement.

Given the current political climate, are you concerned about the possible loss of rights for the LGBT community? Why or why not?

Patricia: I am very concerned that the current political climate is detrimental to LGBT equity. It appears that, with the current administration, we are going backwards from the legal strides that have been made. However, I am optimistic that the young people will not take this sitting down. The school gun safety issue has politically energized the young people, and I have every reason to believe, based on what I hear from former students, that LGBT equity will also be on the agenda!

Russell: I am fearful that the current Administration has encouraged an anti-LGBTQ agenda. I feel hopeful when I hear local and state leaders beginning to take up the struggle to insure we do not slip backwards.

We both agree—the year we are in right now.

Russell: Being with Patricia for over 40 years. ▼

Patricia and Russell, thank you for being such dedicated volunteers. We are appreciative of the time you spend volunteering, and hope to see the two of you volunteering at CAMP Rehoboth events in the future. Email Volunteer Spotlight Suggestion