The Man Who Lives in a Doghouse 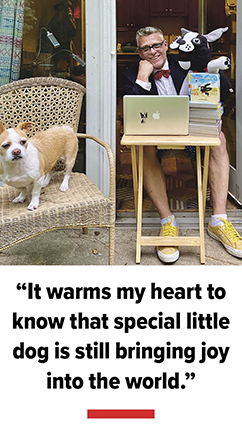 What makes for a good creative space? Ask a hundred people and you’ll undoubtedly get a hundred different answers. Ask Michael Muller, the writer and illustrator best known for his children’s books, greeting cards, t-shirts, and plush toys featuring a personable black and white Boston terrier named Mirabelle (R.I.P. 2020) and he’ll talk about the small guest house pied-à-terre he rents and shares with his current dogs, Henry and Amelia, in Kings Creek Country Club here in Rehoboth.

He considers the place his getaway from the hustle and bustle of Baltimore where he runs his Mirabelle company, which continues to flourish even after Mirabelle’s departure to that great doghouse in the sky. Michael comes and spends his weekdays in Rehoboth for the peace and creative stimulation his little guest house and the beach provides and then heads back to his rowhouse in Baltimore on the weekends to fulfill orders and take care of other company matters. It’s a bit backwards from what most people probably do, but for a creative type it certainly makes sense.

The guest house is small, but it meets his needs with a combined living/work/kitchen space, a sleeping alcove, and a bathroom. “Décor-wise the space is a quiet pale gray with pops of pattern and color in the boho chic carpets and drapes. A crazy Todd Oldham unicorn bedspread keeps the creative muses happy. And, of course, there are boxes of Mirabelle products,” he says with a laugh. “The best feature, though, is a huge glass wall and glass doors that open up the entire place onto a patio and a large lawn facing the woods which the dogs love…. All that glass lets in plenty of light and makes it a great place for me to write and draw and for them to nap,” Michael explains.

In fact, the guest house is where he wrote and illustrated his two newest Mirabelle books due out this summer:  Mirabelle Has a Birthday and Mirabelle Loves Rehoboth. The latter is a sort of ode to Rehoboth, a very dog-friendly town. Spoiler alert—President Biden’s dogs make an appearance in the book! The books are collaborations with Browseabout Books’ owner Susan Kehoe, a longtime fan of the Mirabelle books and a supporter of local authors.

I can’t help myself from thinking it, so I’m just gonna say it…. The man lives in a doghouse! I mean it in a good way, of course, because he tells me he’s always been comfortable living in small spaces with dogs. Some readers will remember when he and his business partner, Tom, owned and ran Details Gallery on Church Street and then on Baltimore Avenue back in the early 2000s. They lived above the Baltimore Avenue gallery with Mirabelle and two older Boston terriers. Even before that, when he and Tom came to spend summers in Rehoboth, they’d rent a small apartment with their dogs on top of the Philip Morton Gallery on Baltimore Avenue. See what I mean.…

“Having dogs around is very calming,” Michael says. “And while I have loved all my dogs, there was something special about Mirabelle, whom Tom gave me as a Christmas gift when we first opened the shop.” Michael named the dog after the main character Mirabelle Buttersfield in comedian Steve Martin’s book Shop Girl, about the life of a young woman selling evening gloves in a Neiman Marcus store in Beverly Hills.

True to her name, Mirabelle became a shop girl, a fixture in the gallery. “From day one, people were drawn to her, in the shop, on the street when we went walking, and even in the Sea Witch® pet parade. She once appeared on a Chamber of Commerce tourist guide map. I always said she was more known about town than me…. And since she grew up in Rehoboth, I suppose it was inevitable that I’d write a book about her life in Rehoboth.”

Watching how people reacted to the personable little black-and-white dog is what inspired Michael to begin designing Mirabelle cards, t-shirts, and tote bags which led to his books and then the creation of an entire company of products based around the dog’s name, image, and likeness.

And even though she’s no longer here, people—kids especially—are still drawn to Mirabelle. Michael tells me about the photos he receives of kids in the hospital holding Mirabelle plush toys and books. Boston University—whose mascot is a Boston terrier—uses the Mirabelle books in one of its community reading programs for children. He himself has even been inspired to work with Boston terrier rescue groups. “It warms my heart to know that special little dog is still bringing joy into the world.”

And with those final words from Michael Muller, I don’t think there’s anything more that I need to add, except maybe to remind you all to look for the book and support local Rehoboth writers. Woof! ▼