Rats Are the Queerest Pets

Hear me out. I’ve been a fancy rat owner for eight years, and I’ve been out for roughly the same amount of time. I’ve learned a lot about myself and my small companions in that time.

Many people have a gut reaction to rats that is negative. There is a cultural distaste for rats as pets, despite them (fancy rats or R. norvegicus f. domestica) having been domesticated for hundreds of years and being genetically different from their wild cousins (R. rattus or R. norvegicus). It’s understandable, honestly. In many places, they are seen as pests to be exterminated, and our media is full of depictions of rats as being dirty, evil, and harbingers of disease. Often in children’s media they are shown as the crooked, dangerous counterparts to the virtuous, civilized mouse. They are perhaps most well-known for the belief that they spread the bubonic plague or Black Death across Europe in the 14th century (which has since been disproven—it turns out that humans spread it to each other due to poor hygiene and human-borne fleas, lice, and ticks, and that rats were only tangentially involved).

Where have we seen these characteristics and beliefs before?

Queer people have been subject to similar propaganda to rats over the years. Our media is full of depictions of queer people as evil, dangerous infiltrators and spreaders of disease, all the way back to when queerness itself was thought of as a disease or pathology (which some people still unfortunately believe), one that could be communicated or indoctrinated into children. Queerness and gender nonconformity was ascribed only to villains, pitted against the upright cishet heroes of the stories. The first name given to HIV/AIDS was GRID, Gay-Related Immunodeficiency, which reflected the belief that it was a disease exclusive to gay people, spread by the deviant sexual practices of non-heterosexuals. 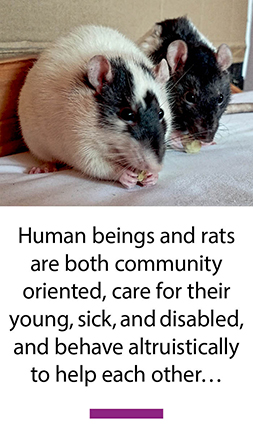 However, like pet rats, we know that we’re not these stereotypes—we are intelligent, friendly, and social creatures. Human beings and rats are both community oriented, care for their young, sick, and disabled, and behave altruistically to help each other even when there is no apparent reward for doing so. There’s a reason why rats are used as precursors to human studies: we share a lot with the little critters, both socially and biologically.

That being said, it would be remiss of me to compare rats to humans without recognizing the historical connotations of the comparison for certain groups of people. This metaphor will certainly be less charming to Jewish and Japanese people, who were compared to rats in propaganda leading up to and during WWII as a way to dehumanize them and naturalize imprisonment, internment, and extermination/genocidal policies. In recent times, it has been used against immigrants, refugees, and racial and religious minorities to justify exclusionary, anti-immigrant, and racist policies. No oppressed humans are pests, or infestations, or any other rhetorical dehumanizing metaphor.

When I say rats are queer, I say that with love for my community and the wonderful animals that have been a part of my life for almost a decade. Like them, we are more than the stereotypes people place on us, and despite the disgust many people harbor for us, we have built amazing communities in places that are openly inhospitable to us.
So, if you feel grossed out when you see the picture of my pets, that’s okay! We’re all entitled to our opinions. But ask yourself why an animal as friendly as a dog, as clean as a cat, and as intelligent as a bird, is so repellent to you. You just might like them if you got a chance to meet them. ▼

Julian Harbaugh (they/them) is a recent University of Delaware graduate who enjoys lively discussions and walking their dog, Chewy. Their degree is in Political Science with a Women’s Studies minor, and in 2020 they completed their undergraduate thesis on the fight for gay marriage in Maryland. When they’re not writing, they can be found teaching their two rats, Baxter and Bramble, new tricks, and roaming garage sales looking for antique philosophy books.