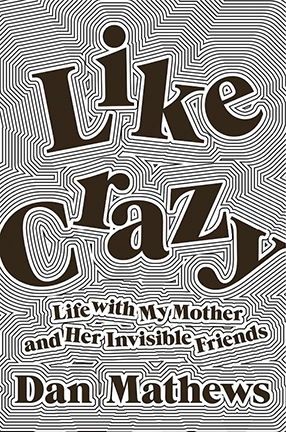 Like Crazy: Life with My Mother and Her Invisible Friends

Like a grand dame's voluminous skirts, the house needed to be taken in.

And that was okay because, oh, she was beautiful, and you knew that a little nip-and-tuck in the form of new floors and fresh walls would make her look and feel better. Taking on this project could be fun, too, so you bought her and started the alterations—and then, as in the new book Like Crazy, by Dan Mathews, you took in your Mom.

The old Victorian house needed a lot of work—paint, updated carpet, sanded wood floors, new plumbing, and the garden was in a shambles—but it would all be worth it. For the first time since he'd escaped his life in California, Mathews was finally stepping up to the plate with home ownership and the care of his elderly mother.

Everybody thought Mathews' "life would be derailed" if Perry moved in. She was feisty, unabashed, loud, almost deaf, and mentally ill.

Mathews adored her, but while she was en route from California to Virginia, he rather feared the future and what it might bring. He knew Perry needed help. She'd needed it her whole life.

She was never eager to discuss her past, her childhood abandonment, foster homes, or abuse but how could those things not affect her? Sometimes, as Mathews remembers, she was witty and joyfully impulsive, but she couldn't raise her sons with anything except a hand-to-mouth existence and constant household moves. And yet, when Mathews came out as a teen, Perry was solidly in his corner and she mothered his gay friends whose mothers wouldn't.

It was a double-sided coin: he loved his mom but once, he'd fled from her. Now, with COPD, possible dementia, general bad health at issue, and obviously at the end of her life, how could Mathews not take her in?

They'd get along. It would be okay. Maybe even fun.

Until the day, he says, that "Our funhouse...turned into a madhouse."

So, here's the thing: you know exactly what's going to happen at the end of Like Crazy. You don't even have to peek or cheat—you'll know. But you'll laugh and cry anyhow because it's that kind of book.

Still, there aren't any sappy violins in author Dan Mathews' story. Nope, though readers may occasionally see the tiniest justifiable pity-party because the backdrop of this book is about parenting a parent, which everybody knows is hard. So, go ahead and forgive, since there's more celebration than deathwatch here anyhow, and each small sweetness will make you wish you'd known Perry, too.

But don't be lulled too far by those warm-fuzzies: there's an electric current that lies just beneath this story, one that awakens slowly, quietly, and grows, popping sometimes like those bang-snappers that little boys love to throw.

When it finally explodes, watch it roar.

In the meantime, let yourself be thoroughly charmed. Laugh at Like Crazy and don't be surprised if there's a tear or two. Love your Mama and enjoy the story. Take it in.##