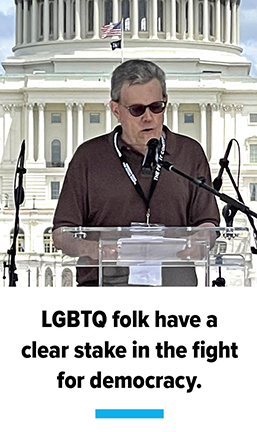 In politics, if you characterize someone else’s concern in the most extreme and provocative manner, you can stir partisan passions and undermine serious discussion of the subject. It is a way to divide people and prevent solutions to our nation’s most pressing issues.

A lot of noise has been made by Republicans looking for a wedge issue over whether history teachers should be able to teach the truth about race in American history. Gay conservative Andrew Sullivan has made a huge fuss over Critical Race Theory (CRT), though he says it should be exposed and not suppressed. But decrying CRT when few understand it much less teach it is like panicking over Sharia law in Wisconsin. It is all heat and no light.

The same is true of efforts to ban trans girls from participating in girls’ sports, efforts that stir a lot of dangerous trans phobia without any evidence of an actual problem.

These bogus controversies are directed at minorities including African Americans, Asians, Jews, Latinos, and the LGBTQ community, especially transgender people. So it shouldn’t be hard to figure out which side self-respecting queers (whatever we call ourselves) should be on.

The Republican Party has become the party of treason, insurrection, and sedition. If there were any doubt of this after January 6, when a Trump-incited mob tried to prevent certification of the presidential election results and threatened to murder Vice President Pence and Speaker Pelosi, that doubt was removed by subsequent actions. The aggressive rewriting of history, the determination to preserve power by any means necessary, and the Confederate Lost Cause revivalism offer no solace to racial, ethnic, or sexual minorities.

I had the honor of speaking at the Black Voters Matter rally on the Mall near the US Capitol on June 26 in support of voting rights and DC Statehood. The rally capped off the eight-day Freedom Ride for Voting Rights.

I spoke briefly: “I am a native Washingtonian and a longtime LGBTQ rights activist. I have worked in coalitions for policing reform and marriage equality in this city. I support the John Lewis Voting Rights Advancement Act, the For the People Act, and DC Statehood.

“DC’s population is larger than those of Vermont and Wyoming. We pay federal taxes. We serve disproportionately in America’s wars. Yet we are denied voting representation in Congress. We deserve Statehood, and we will not get it from the insurrectionists.

“In our responses to hate crimes, racist policing, and vote suppression and nullification, there is a stark and telling contrast between the aspirational ‘This is not who we are’ and the observational ‘Here is further evidence that this is exactly who we are.’

“Our Constitution and values are under assault. We need to change our laws. We need to litigate and electioneer like never before. We need to tell the truth. We need to support one another. We need to take firm, smart, and concerted action against those who attack democracy in state legislatures, at the US Capitol, and on the floor of the Senate.

“Like our ancestors, we struggle for a more perfect union. We are the bulwark against autocracy and the poison of racism, sexism, homophobia, and transphobia. Let us defeat the division and disinformation, as Dr. King urged us, by working and fighting ‘until justice runs down like water, and righteousness like a mighty stream.’

I got the invitation to speak because I have worked with rally emcee Mark Thompson for a quarter century. Mark was political director of the DC branch of NAACP in 1997 when he organized the DC Police Task Force (of which I was a member representing DC’s Gay and Lesbian Activists Alliance, which marks its 50th anniversary this year) to reestablish independent police review in DC. Mark, a radio talk show host, has emceed many civil rights rallies.

In other words, my presence on that stage was about more than me getting a great publicity shot. It represents just the sort of coalition building that was championed by Harvey Milk more than four decades ago. The LGBTQ community crosses every demographic; that is the essence of intersectionality.

The main reason I can think of to oppose participation in coalitions like the one reflected on the Mall on June 26 is if you are a white, cisgender, conservative male who feels immune from political scapegoating. To paraphrase Pastor Martin Niemöller, once the fascists have gone after all the other usual scapegoats, who will be left to defend you? ▼