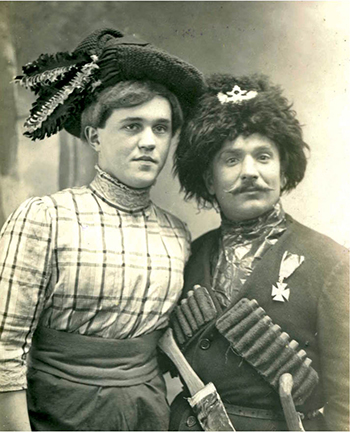 Is it just me, or does it seem that Russia has been a staple of the American news diet for, like, ever? Throughout almost the entirety of the 20th century and now into the 21st, it’s been one Russian story after another. First, the 1917 Revolution that writer John Reed said “shook the world.” Then came the Red Scare of the 1920s; the perceived infiltration by Communists into the American labor movement during the 1930s Depression; a brief warming of relations necessitated by the Second World War; the nuclear arms race during Cold War of the 1950s and its McCarthyite witch hunt for “Commies” in every crevice. Later in the 20th century came the glimmer of hope for better relations and the hoped-for institution of Russian democracy after the fall of the Soviet system in 1991. And now, the resumption of hostile relations with rise of Russian strongman Vladimir Putin and his shenanigans to destabilize the West, America in particular.

One might think that after a century of daily doses of such fare we’d know quite a bit about the lives of the Russian people, past and present. To some extent we do. We’ve seen countless photos of peasants in babushkas trudging in the snow. We’ve seen glamourous photos of the Tsarist elite. Newsreels showed us revolutionaries storming the palaces. But looking at all these photos and newsreels, I want to know: “Who in that crowd of people is L, G, B, T, or Q?”

According to author Dan Healy’s scholarly Homosexual Desire in Revolutionary Russia, published in 2001, LGBTQ life in Russia before the eighteenth century was generally ignored by the authorities. Yes, there were restrictive laws against homosexuals, but these laws went largely unenforced. Russia, at that time, was rather a backwater, culturally apart from Europe. While the rest of Europe was modernizing, expanding their ideas of cultural refinement, Russia still clung to earthier traditions going back to its pre-Christian past.

Russia’s lenient attitude toward homosexuality ended with Peter the Great’s Europeanization of his enormous realm. It was Peter who signed Russia’s first specifically anti-homosexual law in 1716.

Peter’s Europeanization of Russia actually worked against his crackdown on LGBTQ life. The influence of Europe’s more sophisticated culture, and the opening of trade and other exchanges it brought with it, led to a rapid urbanization in Russia. As is always the case, artists and other free spirits migrated to the big cities of St. Petersburg and Moscow, where LGBTQ life and culture took root.

By the 19th century, Russia’s cities were swinging. The Tsarist elite and aristocracy patronized the arts in a big way, supporting highbrow and lowbrow entertainments, mixing and mingling with the creators of those arts. One of the more notable aristocrats in this scene was Grand Duke Konstantin (1858-1915), a gentleman whose lineage was about as highfalutin as you can get: grandson of Tsar Nicholas I, and uncle of the last Tsar, Nicholas II. Konstantin’s homosexuality, and his struggle to resist his urges—a struggle he usually lost in his visits to gay brothels—was revealed when his diaries were finally published in 1994.

Though Konstantin struggled against his homosexuality, many of Russia’s elites partook of its pleasures. House parties in St. Petersburg were the scenes of extravagant dinners, dancing, and entertainment by drag performers.

An odd and interesting note regarding all this homosexual revelry was a 1913 essay, “Moonlight People,” by writer and philosopher Vasily Rozanov. Rozanov wrote that homosexuality had a place in both Russian cultural history and religious history! Citing an 11th century text, Lives of Boris and Gleb, about younger sons of Tsar Vladimir the Great who were martyred around the year 1015 and were later canonized, Rozanov suggests that various martyrs and saints of the Russian Orthodox church were in fact homosexual.

There were still repressive laws on the books, though. This did not change until Russia changed in the world-shaking upheaval of the 1917 revolution, when the triumphant Communists overturned all laws written under tsarist rule, and the Soviet government decriminalized homosexual behavior.

But this freedom did not last. In 1931, Stalin recriminalized LGBTQ relationships. Stalin’s laws remained in force until the post-Soviet constitution of 1991.

By now you’ve noticed that I’ve not mentioned lesbians. That’s because they were not included in either Russia’s repressive laws or the decriminalization of homosexuality. These laws apply only to men. Lesbians were ignored because what women did was considered unimportant. Insulting? Yes, but it afforded lesbians a bit more freedom: if you’re invisible, nobody sees what you do.

Russia today has an active LGBTQ community and rights movement. Like ours here in America, it has a history, a lineage of cultural achievement side by side with its oppression. To those activists whom we never see or hear about in our daily deluge of news about Russia, I say, “Nostrovia!” To your health! ▼