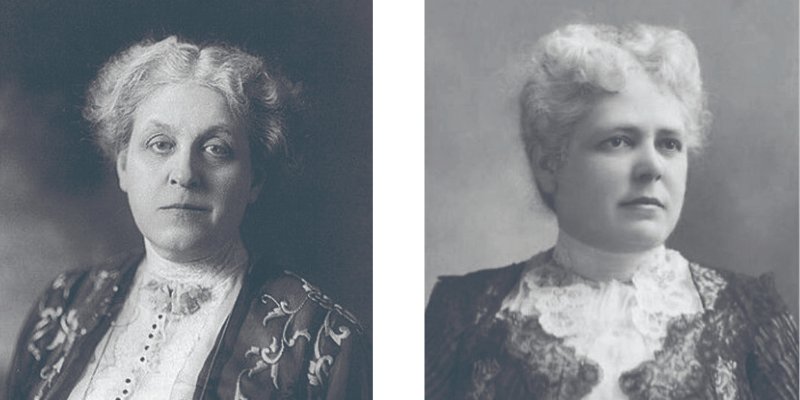 The simple checkmark, lever pull, or fill-in-the-dot can be as powerful an agent for change as massive marches and fist-in-the-air protests. What I’m talking about, of course, is voting. The old saying, “Vote the scoundrels out,” was never more important than it is today, when the current crop of government scoundrels is hell bent on suppressing votes and erasing hard won civil rights.

Women’s rights and lesbian rights, though inextricably entwined, are still sometimes viewed as separate causes, with lesbian rights historically taking a back seat to broader women’s issues. This was the case with the early 20th century’s signature civil rights triumph: granting women the right to vote. The lesbian presence in the suffragette movement was extensive, but until recently, who knew?

I guess you could say, we knew. Lesbians knew. Queer folk knew. But the larger world did not know. Lesbian lives were hidden lest they damage the political fight for women’s right to vote. Even today, lesbians are absent in far too many texts discussing the suffrage movement.

The lesbian lives and relationships of a number of suffragettes are still only slowly coming to light. One couple in particular merits attention: Carrie Chapman Catt and Mary “Molly” Garret Hay brought sharp political talents to the cause. Though the famous purple sashes and suffragette marches became the enduring symbols of the movement, it was, as always, political strategy which won the day.

Carrie Chapman Catt joined the suffragette cause in the late 1880s and was elected president of the National American Women’s Suffrage Association in 1900, taking the position originally held by Susan B. Anthony. Catt’s tireless campaigning around the country and talent for public speaking buttressed her formidable political acumen. Through her understanding of the political machinery at both the federal and state levels, Catt secured the support of several US senators and state representatives—all of them men—for women’s suffrage. Her political strategies were critical in getting the 19th Amendment passed in the US Congress and subsequently adopted by the states, granting women the right to vote.

Though Catt’s achievements in the suffrage fight are laudable, she was nonetheless a woman of her time, holding the social beliefs of her time. She did not support extending voting rights to immigrant women, for example. But in two respects she was ahead of her time: as a fighter for women’s rights and in her lesbian relationship with Molly Hay. Though Catt married and was widowed twice—again, she was a woman of her time—upon the death of her second husband in 1905 Catt moved in with Hay, whom she’d met seven years earlier and the two began their affair. They lived together for 23 years, until Hay’s death.

Mary “Molly” Garret Hay was Catt’s equal in political know-how. Growing up in a politically active household in Charlestown, Indiana, young Hay often accompanied her prominent Republican father to political meetings (this was a century and a half before the Republican party went off the rails). She eventually moved to New York, where she won leadership positions in the Women’s City Club of New York and eventually the presidency of the New York League of Women Voters and the New York Equal Suffrage League. Under her presidency, the NYESL succeeded in obtaining the vote for women in New York two years before it passed at the federal level. Prior to her presidency of the NYESL, Hay organized suffrage efforts across the US. In 1899, she and Catt, already in their loving relationship, toured the country, whipping up support for the cause, speaking at women’s conventions, and developing political strategies for use by local women’s suffrage groups.

Catt and Hay’s commitment to the fight for women’s voting rights often resulted in being apart, each attending meetings in different parts of the country. Historian Lilian Faderman, author of To Believe in Women: What Lesbians Have Done For America and other important works, notes that during these separations, the two wrote loving letters to each other. In these letters, Catt refers to Hay as “Molly Brown Eyes.” She asks, “Who loves you best in all the world?” and on Hay’s birthday writes that she’d like to give her “69 kisses.”

Mary “Molly” Garret Hay died in 1928, Carrie Chapman Catt in 1947. Catt stipulated that upon her death she should be buried alongside Hay. They remain side by side at Woodlawn Cemetery in Queens, New York.

Catt and Hay, and the other lesbians who worked tirelessly, unheralded, and hidden, for women’s right to vote would be appalled at today’s assault by our government on women’s rights. As Queer folk, whether we identify as women, men, trans, binary, or any other appellation of our choice, we understand what it means to fight for justice. A powerful weapon in that fight is the vote. Let’s use it to vote the scoundrels out.