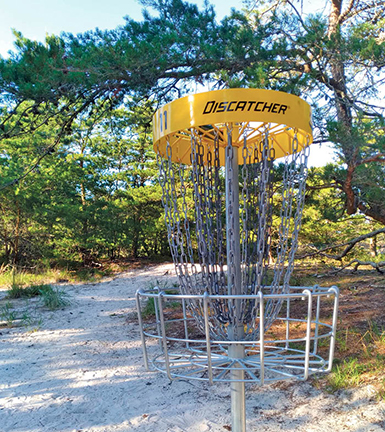 Delaware State Parks’ amenities enjoy a very positive national reputation. So too does a game (available at many of those parks) whose roots go all the way back to 1978 in Delaware.

One of the very first disc golf courses in the history of the sport was established at Cape Henlopen State Park (CHSP) in 1978. It followed by only three years the first permanent course in the US, which was built in Los Angeles County, California, in 1975. The unique terrain of coastal dunes is a highlight of the CHSP course, and it enjoys year-round popularity.

There now are dozens of disc golf courses—both public and private—in Delaware and Maryland (as well as throughout the US). They are located in varying outdoor spaces, some looping through pine forests or bordering pristine waterways, many affording players appealing views of nature and wildlife.

Disc golf’s popularity is widespread; as of 2020, there were 6,652 US disc golf courses listed on the official Professional Disc Golf Association (PDGA) registry. Delaware has the distinction of being one of five states with the most courses per square mile of dry land. (The other four sharing this distinction are Connecticut, Massachusetts, Ohio, and Wisconsin.)

Disc golf is a pleasant physical game of accuracy and patience that moves at a stroller’s pace. It first developed as a sport in the 1970s and draws on the game of golf in terms of scoring and teeing-off towards a destination. Also as in golf, the player progresses toward the “hole”—though in disc golf, the designated target is often an elevated metal basket—with a goal of reaching the hole with as few throws as possible. Full-size disc golf courses have at least 18 holes.

Disc golf players use discs or Frisbees®, rather than balls and clubs. They first throw the disc from a deck or “tee,” advancing toward the hole. Each subsequent throw is made from the point at which the prior throw landed. The success of each throw is influenced by the weight and shape of the disc, as well as the general principles of aerodynamics. The aim is to make the basket (hole) at or under par.

Another appealing aspect of disc golf: it’s very affordable. A set of three discs can be bought for under $20; the casual player may simply opt to start with a Frisbee®. Many courses are located in state or county parks and may be played free of charge or with payment of only a park entrance fee. (There also are many private courses, which may or may not permit public play.) Reservations may be required at public or private courses.

Tournaments are widely popular across the US. Here in Delaware, the Delaware Amateur Championship will be held August 13 and 14 in New Castle County, at Brandywine State Park and Iron Hill County Park, with three rounds of play across the two days. And on August 21, the Beach Bash, a PDGA-sanctioned singles tournament, will tee off at CHSP.

Competition may be fierce and intense for amateurs and professionals. But disc golf also offers casual players a scenic stroll through park terrain, meanwhile tossing their discs toward the baskets. One such player is college student Evan Short, of Newark, Delaware.

Short, who has been playing for many years, considers the Iron Hill course his favorite. Located in Newark, Delaware, the course was laid out in 2008 and was designed to offer a substantial technical and terrain challenge. The 10,000-foot course runs through dense trees and boulders across many elevations, giving the Iron Hill a professional rating and a reputation as one of the premiere courses on the East Coast.

Short, who loves the game for the simple pleasure of enjoying the outdoors with a challenge in hand, finds Iron Hill a welcome stroll with his friends. “I love the hiking aspect and camaraderie with my friends,” he says.

Ready to give disc golf a try? You could start with the Frisbee® you already own. Or you could purchase a disc set—which includes a minimum of three discs: a driver, a mid-range and a putter. Two of each disc are recommended for playing a course, as it’s not uncommon to lose one along the way. Disc sets are available to purchase online, in sporting goods stores, and at some park shops. ▼

JuneRose (JR) Futcher is a native of Delaware, a lifelong sailor and certified sailing instructor, an award-winning photographer, and a community and arts activist.