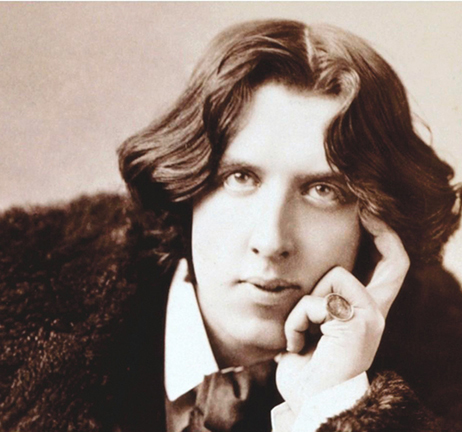 So let’s talk about Oscar Wilde, the gentleman who wrote that line in his 1890 novel, The Picture of Dorian Gray.

If we’re going to celebrate people who gave so much so that we could live openly, then we have to talk about Oscar. He gave his life. He gave his death. He also gave us a lotta laughs. Try these:

“Always forgive your enemies; nothing annoys them so much.”

“I think that God, in creating man, somewhat overestimated his ability.”

We all know about Wilde’s magnificent literary legacy. But we also need to remember his socio-political legacy; his courage to challenge the law and live life as he saw fit, and the brutal punishments the law inflicted on him.

Victorian London was originally kind to Wilde, an Irishman who found his voice in England’s Aesthetic movement filtered through his romantic Irish soul and scathing personal wit.

His plays—The Importance of Being Earnest and Lady Windemere’s Fan, among others—were huge hits of the London theater. His stories were snapped up, and his novel of the dissolute Dorian Gray was a bestseller. Wilde was the toast of London.

It all crashed in 1895. On February 18, John Douglass, the Marquess of Queensberry, left a publicly visible calling card at the Albemarle Club, where Wilde was a member. On the card, Douglass scribbled: “For Oscar Wilde, posing sodomite.” The Marquess had outed the author.

It was an act of vengeance. Douglass was enraged over Wilde’s affair with the Marquess’s son, Lord Alfred Douglass. Alfred, known as Bosie, was a beautiful and raffish young man. Wilde, though married, fell madly in love with him. This arrangement wasn’t uncommon among London’s bohemians; according to Fanny Moyle’s biography of Wilde’s wife, Constance Wilde, she granted tacit acceptance.

Angered by what Wilde considered an insult to the beauty of his and Bosie’s passions, he sued the Marquess for libel. It was a disaster. The Marquess’s private investigators revealed Wilde’s previous lovers and his patronage of homosexual brothels. Wilde was forced to drop his libel claim.

But with his homosexual life exposed in a court of law, Wilde left himself open to arrest under England’s “gross indecency” statute. A subsequent trial, where Wilde movingly and often humorously defended the beauty of his life and what he considered the art of his passions, ended in conviction.

He was given the maximum sentence the law allowed, two years of hard labor. Judge Alfred Willis, in pronouncing the sentence, sneered that two years was “insufficient for a case such as this” and called it “the worst case I have ever tried.” The judge evidently deemed murder a less criminally offensive act than consensual homosexual sex.

Wilde began his prison ordeal in London’s Newgate Prison, but was soon moved to the harsher Pentonville Prison. At Pentonville, inmates were subjected to long days on a treadmill without letup and the grinding work of pulling apart discarded maritime ropes.

Conditions were even worse at Wilde’s next stop, Wandsworth Prison, where harsh labor and meagre food eventually led to Wilde’s disintegrating health. He finally collapsed in his cell from sickness and malnutrition.

Conditions were somewhat better in Reading Gaol, where a sympathetic politician arranged Wilde’s remaining months of imprisonment. It was here that Wilde, looking back on his experiences, wrote his famous 50,000-word letter to Bosie, a letter partially published in 1905 by Wilde’s devoted friend and earlier lover, Robbie Ross.

He titled the letter De Profundis (“from the depths”). In it, Wilde takes himself and Bosie to task for their dissolute life and the abuse of their love. Later in the letter, he reveals a spiritual side of himself, which he credits with helping him survive prison. Wilde does not, however, reject his passions, nor his belief that his life and loves were expressions of art.

Physically broken but still defiant in spirit, Wilde left for France after his release from prison. He remained in Paris until his death, his health deteriorating, his drinking increasing, his finances impoverished, but still daring to live life on his own terms in the taverns and brothels.

When he became too weak and sick to leave his shabby hotel room, he said to visiting friends, “My wallpaper and I are fighting a duel to the death. One of us has to go.” Oscar Wilde went on November 30, 1900. He was 46 years old. The wallpaper was older. ▼