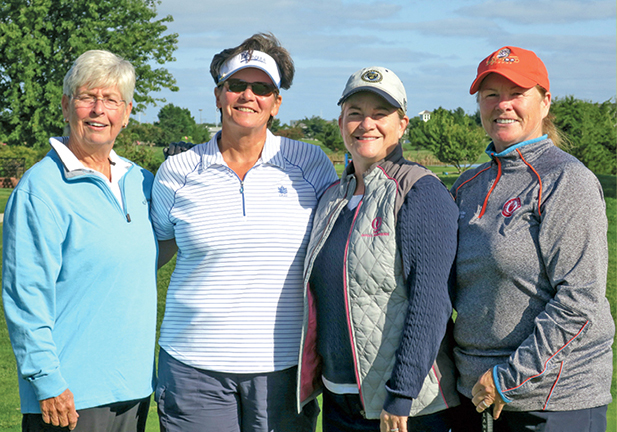 The 2019 CAMP Rehoboth Women’s Golf League ended its season on September 19 with 36 women participating in the end-of-the-year tournament, followed by over 44 women enjoying a final banquet provided by staff at the American Classic golf course.

There were many challenging obstacles throughout the course, including closest to the pin, longest drive, closest to the line, and longest putt, with added obstacles on “flush it,” baggage claim, or hula hoop challenge.

Susan Shollenberger scored the fewest putts and Bev Lesher was the most “honest” golfer, recording the most putts. A festive banquet wwas enjoyed by all. The 2020 season will commence in April. CAMP Rehoboth thanks league organizers, Donna Dolce and Jo Picone, for their time and effort in supporting this long-time popular league. ▼

CAMP Rehoboth’s Health and Wellness program is kicking off an initiative to meet the needs of Delaware coastal area residents who have HIV.

The project will be under the direction of Salvatore Seeley, Health and Wellness Program Director, and Peter Pizzolongo, the Living a Positive Life Project Coordinator. The initiative is designed to empower people with HIV; participants will have a major role in designing the project and constructing a group that best meets their needs.

The first session will be Tuesday, October 29, 6:30-7:45 pm, at the CAMP Rehoboth Community Center. Individuals with HIV—long-term survivors and those newly diagnosed—are invited to attend this opening meeting. The major focus will be on identifying topics for subsequent sessions. Sandwiches and beverages will be provided.

Living a Positive Life is funded by the AIDS Healthcare Foundation and will involve six meetings with speakers; each will include time for discussion. Topics may include an overview of antiretroviral and integrative therapies, medical adherence fatigue, nutrition for people with HIV, strategies for maintaining good mental health, and advance care planning. The final selection of topics will be made by the project participants.

Living a Positive Life will also establish an online network to enable individuals to connect with one another and with local resources, such as healthcare providers, nutrition experts, mental health specialists, and others.

Salvatore (Sal) Seeley, has been on staff at CAMP Rehoboth since 2000. He is a licensed clinical social worker and also holds a Doctorate of Human Sexuality. Sal serves as the CAMPsafe Program Director and LGBTQ Mental Health Project Director.

Peter Pizzolongo, Project Coordinator, holds a bachelor’s degree in psychology and a master’s degree in education. He served as a volunteer for Baltimore’s HERO program and Washington DC’s Whitman-Walker Clinic, beginning in the mid-1980s. Peter’s other HIV-related work includes serving as director of the AIDS Training Institute for Public Health Professionals, and tech coordinator for Ryan White CARE Act Grantees, both projects funded by the US Department of Health and Human Services.

For further information about the project, contact Sal Seeley or Peter Pizzolongo. ▼

Yes, it’s true. For the 20th anniversary of the CAMP Rehoboth Women’s FEST, the Indigo Girls AND Chely Wright, AND a trio of beloved comics called Funny Girlz will rejoice with us April 29-May 3 for the 20th Annual FEST.

The FEST, expanded to five days to celebrate two decades of success, will open with the “locals” dance on Wednesday night, Chely Wright performing on Thursday night, Funny Girlz Vickie Shaw, Lisa Koch and Roxanna Ward on Friday, and an intimate concert with the Indigo Girls on Saturday. All evening events will be at the Rehoboth Beach Convention Center and it will be one heck of a party. Save the dates and get ready for FEST Pass announcements just after New Year’s—the Convention Center is a small venue for the Indigo Girls and Chely Wright, so get ready for an enormous treat and a rush for tickets.

As always, the FEST will include sports favorites (more golf this year, we hope, and lots of pickleball and corn hole), dynamite speakers, the book fair and craft expo, Ladies 2000 Tea Dance, bingo, added entertainers, and the Broadwalk. Plus everything else that has made this event the largest gathering of its kind in the mid-Atlantic region.

Watch for even more details in the November issue of Letters and mark your spring 2020 calendars NOW. The 20th anniversary of Women’s FEST is going to rock! ▼