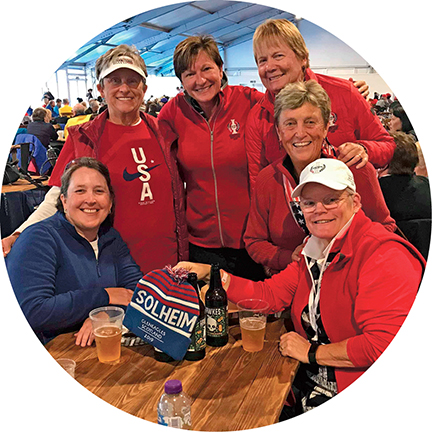 The Rehoboth Beach Senior Women’s Softball season has officially come to an end. The winning team, the Delaware Diamonds, had a fantastic season, posting a 10-2 record and having a great time doing it.
The Diamonds’ line up consists of women ranging from 48-77 years old. This group has lots of talented players, including Gabby Dillard who was named MVD (Most Valuable Diamond). Gabby was moved from 3rd base to left center mid-year to cover for an injured player and she was amazing. That’s about the time that the team learned that, as a much younger player, Gabby was a Golden Glove outfielder for the state of Delaware.

According to Dottie, the Diamonds are also a group of compassionate women, many of whom are in the helping professions like Dee Pecora. Dee is a nurse and decided it was important for the league to have an automated external defibrillator (AED) available during games, so she bought one for the league.

The Diamonds insist that their entire line-up is always ready to sub if needed, and their last game was a prime example. Dottie Pope, who hasn’t played in over 30 years, was called upon to take over 2nd base. She borrowed a glove, put on some cleats, and ended up going 2 for 3 at the plate and making some great plays at second base. She must have been some great player 30 years ago to sub like she did.

The Diamonds played their last game against the Shore Sharks and didn’t need the win in order to win the season. But Dottie’s philosophy is that the last game win of the season sets the momentum for the next season. The Diamonds won 10-7 and hope to use that momentum to take them to the national Senior Olympics in 2020.

If you are interested in playing softball next year, either go to the website, or email Rina Pellegrini. The league would like to add another team for 2020.

Autumn means an end to the golf season for many locals. So instead of playing golf, a group of us decided to head over to Scotland to watch Team USA play against Team Europe in the Solheim Cup.

The Solheim Cup is played every two years, alternating between a course in Europe and one in the US. This year the tournament was played at Gleneagles in Scotland (which is about an hour away from the most iconic course in the world—St. Andrews).

While in Scotland, local golfers Margie Moore and Sheree Mixell, along with this reporter, and Pattie Magee, took the iconic picture crossing the bridge at St. Andrews. The Solheim Cup was won by Team Europe, despite the best efforts of Team USA and the loud cheering (and patriotic outfits) of the American fans from Kings Creek Country Club in Rehoboth Beach.

Bowling Is Up Next

One sport just getting started for fall is bowling. The Rainbow Ladies Bowling League meets on Tuesdays at Millsboro Lanes.  Don’t miss the chance to stay active this fall and get to know our local bowling legend, Rina Pellegrini, while you’re doing it. Rina is the league coordinator and you can contact her at if you’re interested. ▼