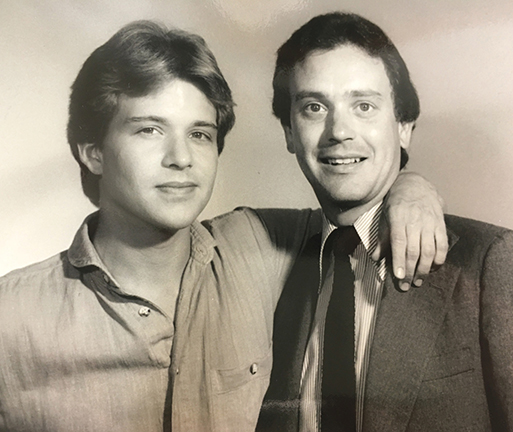 From the White House to the House with a Heart

Editor’s note: This is the first in a series of articles that will come together as a 30-year history of CAMP Rehoboth and the gay community in Rehoboth Beach.

“All you can take with you is that which you have given away.” – motto next to portrait of George Bailey’s father

Like George Bailey, in Frank Capra’s film It’s a Wonderful Life, Stephen Wade Elkins, in the view of many Rehoboth townsfolk, was “the richest man in town.” When Steve died of lymphoma in March 2018, the town’s flag was set at half-staff. Women and men, from the inner corridors of Dover’s statehouse to the outer banks of Cape Henlopen’s lighthouse, praised his legacy of community building and genuine love for others. “He shattered stereotypes and opened hearts with his example, his humor, his attention to detail, and his sheer will,” read his obituary.

Steve’s husband of nearly four decades, Murray Archibald, remembered: “In our many years together, I never had a boring day. We learned over time how to both live and work side by side and to grow our relationship in the process. He made me laugh and he made me weep. Though he probably never thought about it, he taught me to control my youthful temper. He kept me from being too far out in left field and I kept him from being too buttoned down.”

Both Steve and Murray were southern boys, with deep roots in Georgia and Alabama. Murray, the son of generations of Methodist ministers on both sides of his family, is an artist. His mother, who majored in psychology, “taught us to exercise our creativity. No matter what we were doing, it was always a celebration.”

“By the time I was a teenager,” his youngest brother, John, recalled, “Murray was David Bowie and I was Bama. He was knee-high suede boots (it was the 70s) and I was cleats. He was out and he was gay....”

“I certainly had a crush on every boyfriend I had growing up from as early as I can remember. But,” Murray added, “I had no name for it.” Unlike many boys growing up gay in the South, Murray “didn’t have a whole lot of anguish,” he admitted. “I was in that strange age when Stonewall had just happened, so it was like bursting out. I felt I was right where I was supposed to be.”

The liberalness of Murray’s parents and their Methodism certainly made coming out at age 16 relatively easy. “My family was close, and I was not very good at having secrets.... They said they pretty much knew.” Similarly, his brother John, who was nine years younger, was accepting, as were Murray’s other siblings.

Years later, John remembered the family embracing Steve when the couple made their first Christmas visit to the family’s Alabama parsonage. “He was Brooks Brothers and business and buttoned down,” but he “sang in the church pew like Dad and talked sports (as best he could).”

An Eagle Scout growing up gay in the 60s South, Steve recollected that “bars were still raided, and gay and lesbian people carried to jail.” Like Murray, Steve was involved in church life. But he remained deeply closeted. The son of a successful import businessman, Steve was president of his class and, as his only sister—Judy—described, could be a “bossy showman.”

After graduating from the University of Georgia with a major in journalism, Steve took a job at an insurance company before being caught up in Jimmy Carter’s long shot 1976 presidential campaign. Following the November victory, he moved to Washington and stayed on as a White House aide where—as he would often say laughingly—“my big claim to fame was that I had control over who got what parking spot.”

That same year Murray graduated from Birmingham Southern College where he was “completely obsessed with theater,” designing for productions, and acting. “There weren’t really any local gay organizations those days,” Murray recalled. “It was all about disco.... There were some gay clubs in Birmingham—all the fun ones were gay!”

As Murray began working with a theater group performing in Alabama schools, Steve settled into Washington. The gay scene in DC was not unlike Atlanta’s. The Capital was still pretty much a southern town or, as John Kennedy once quipped, a city of “northern charm and southern efficiency.” In 1975, the city’s first official Gay Pride Day brought more than 1,000 people to 20th Street NW between R and S Streets, sponsored by the recently opened Lambda Rising Bookstore. Although Steve was not “out” at work, he enjoyed Washington’s increasingly public gay scene, ranging from the mega-clubs in the warehouse district to upscale bars in the gentrifying Dupont Circle neighborhood.

One September day, in 1978, he received a call from White House security to clear two friends, William and Vicki, who had a large painting for the Old Executive Office Building. Steve recollected Vicki also requesting, “‘Clear in Murray Archibald who’s visiting.’ I’ll never forget it. I said, ‘Sure. Is he okay?’ And she said, ‘Oh, yeah, he’s real nice. You’ll like him.’ Thirty minutes later it was history."

Murray had just arrived in DC. The Alabama theater was dark for just a week, so he planned a brief visit with William before driving to New York City “to see someone I had met a few months earlier.”

After small talk, Steve was told the trio had to leave to bring another painting.

“Will you clear us back in?” Vicki asked. “I’ll clear you and Bill back in, but Murray’s going to stay here. I’m going to give him a tour of the White House.”

Steve, dressed in his Brooks Brothers suit punctuated with a stylish tie, escorted Murray, wearing “torn jeans and sandals,” into the Oval Office. “We both knew instantly,” Murray recalled. “It was just a spark the very moment we met.”

Murray traded his days in New York for evenings with Steve in DC.

When he returned to Birmingham a week later, Murray announced the relationship to his parents. “It was funny, they were just like, ‘Okay.’ They were just happy that I had found someone.” He gave notice to the theater group, packed his bags, and joined Steve in DC.

A few months later, Murray accompanied Steve to his new job at a St. Louis bank holding company. There, the couple spent New Year’s Eve in an empty apartment. “I think it was probably a good thing because neither of us were around our own set of friends. We had to find our own way.”

And, for 40 years they would. “It was just one of those things that just felt like fate,” Murray declared. “Something settled in my soul when we were together.”

During the past three decades, finding their way has transformed into finding our way—what many longstanding CAMP members fondly refer to as the “Steve-Murray Way.” Chris Beagle explained, “The example Murray and Steve set has taught us the meaning of community, how to be inclusive and work productively, and the importance of making our voices heard.”

And in the process, CAMP Rehoboth would become the “heart of the community.” ▼

Author’s note: In the next installment, travel back with Steve and Murray as they return to DC and summer at Rehoboth Beach—just as the town grapples with its growing LGBTQ visibility. If you have stories you would like to share about Rehoboth as part of this oral history project, contact the CAMP office or email James at islandauthor@gmail.com. James Sears is the author of many books on LGBTQ history and culture; his forthcoming book is Beyond the Boardwalk: Queering the History of Rehoboth Beach.