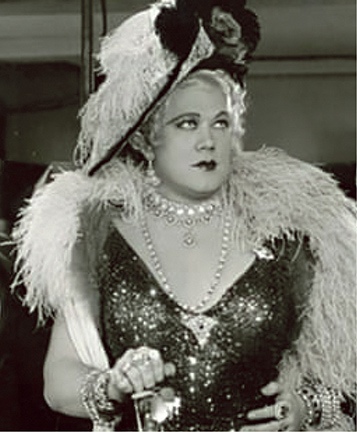 Before there was Billy Porter and “Pose,” before Ru Paul’s “Drag Race,” even before the 1990 movie Paris Is Burning about the 1980s Drag Balls, there were the naughty entertainments of the 1920s and early ’30s known as the Pansy Craze.

Though the term pansy is sneered at today as insulting and dehumanizing, in the hard-partying Jazz Age, the gay world took ownership of the term, with gay male entertainers bringing it to a high art.

Gay male drag balls already had a long lineage by the time of the Pansy Craze, beginning with the elegant Masquerade Balls in Harlem in 1869. Post-Civil War Harlem experienced an economic boom and a simultaneous change in demographics from middle class and well-to-do white New Yorkers to European immigrants, many Italian and Jewish.

By the 1920s, the neighborhood had changed again, becoming an enclave of African American population and culture, notably the creative achievements of the Harlem Renaissance. White Jazz Age partiers from downtown came uptown for the innovative music, nightclubs, and a freer attitude toward sexual expression.

Masquerade Balls spread out from Harlem, with balls and drag clubs opening all over town. Prizes were given at the balls for outstanding costumes and gowns. Though homosexuality and cross dressing were still illegal, the “anything goes” attitude of the Jazz Age, well lubricated by free-flowing liquor in the speakeasies that defied Prohibition, allowed drag shows and performers to operate generally openly. The shows were lively, racy, featuring songs that celebrated pansy life. Among the most popular were “Masculine Women, Feminine Men” and “Let’s All Be Fairies.”

One of the young men attending Manhattan’s drag balls was a teenager from Brooklyn, Victor Eugene James Malinovsky. Dropping the long name in favor of the more elegant Jean Malin, he was a creative designer and performer, often winning costume and gown competitions. At over six feet tall and 200 pounds, Malin certainly filled his sequins.

Malin soon graduated to professional drag status, performing as Imogene “Bubbles” Wilson at the Rubaiyat nightclub, a gay watering hole in Greenwich Village. Malin’s polish as a performer, his wit, and his monumental stature in a gown, gained the notice of Louis Schwartz, owner of upscale clubs in New York. Schwartz hired Malin as emcee for an elegant drag show at the Abbey Club in the theater district.

The show, and Malin, were hits. Now outfitted in a tuxedo, but calling himself a “professional pansy,” Malin’s tart wit and scathing retorts to hecklers made him a star. Noted show business columnist Mark Hellinger wrote that Malin “gave Broadway its first glimpse of pansy nightlife.”

The Abbey closed in 1931 after a gangland shooting there led to a crackdown on all drag clubs in New York. After a brief stint performing in Boston, in 1932 Malin moved to Hollywood, where the Pansy Craze was still in full swing. Drag clubs such as the La Boheme, Clarke’s, and Jimmie’s Backyard featured the genre’s stars in racy revues. Popular female impersonator Rae Bourbon starred in Boys Will Be Girls at Jimmie’s Backyard.

Malin fit right in, opening to great fanfare at the Club New Yorker. Variety, the show business newspaper, loved Malin’s act, noting his smart patter and quick wit, calling him a “class entertainer.” The cream of Hollywood flocked to his show. Ginger Rogers became a fan and a friend, as did film comedienne Patsy Kelly.

Movies came calling, but filmdom’s embrace of Malin proved chilly. He was cast in only three films, Joan Crawford’s Dancing Lady, Arizona to Broadway, and Double Harness. His scenes in Double Harness were cut from the film, his character replaced by a less effeminate actor. RKO Pictures’ president, B.B. Kahane, banned him from further RKO productions.

Malin’s career in LA’s drag clubs remained robust, with a successful run at Venice Pier’s popular Ship Café. After the final night of the show, August 10, 1933, tragedy struck. Malin, along with his lover, Jimmy Forlenza, and actress Patsy Kelly, piled into Malin’s car to drive to a party at the Hollywood Barn Café. According to accident reports and witnesses, Malin accidently put the car into reverse, sending the car plunging off the pier and into the ocean. Forlenza and Kelly survived, but Malin, pinned under the steering wheel, died in the car. He was only 25 years old.

Jean Malin’s untimely death coincided with the waning of the Pansy Craze. As the Great Depression ground on, with war on the horizon in Europe and eventually the United States, irreverent entertainment challenging sexual mores found less welcome in America’s increasingly fearful culture. But an entertainment as vibrant, creative, and expressive as drag could never be fully repressed. It thrives today. It always will.

Happy Halloween. Go ahead, dress up.