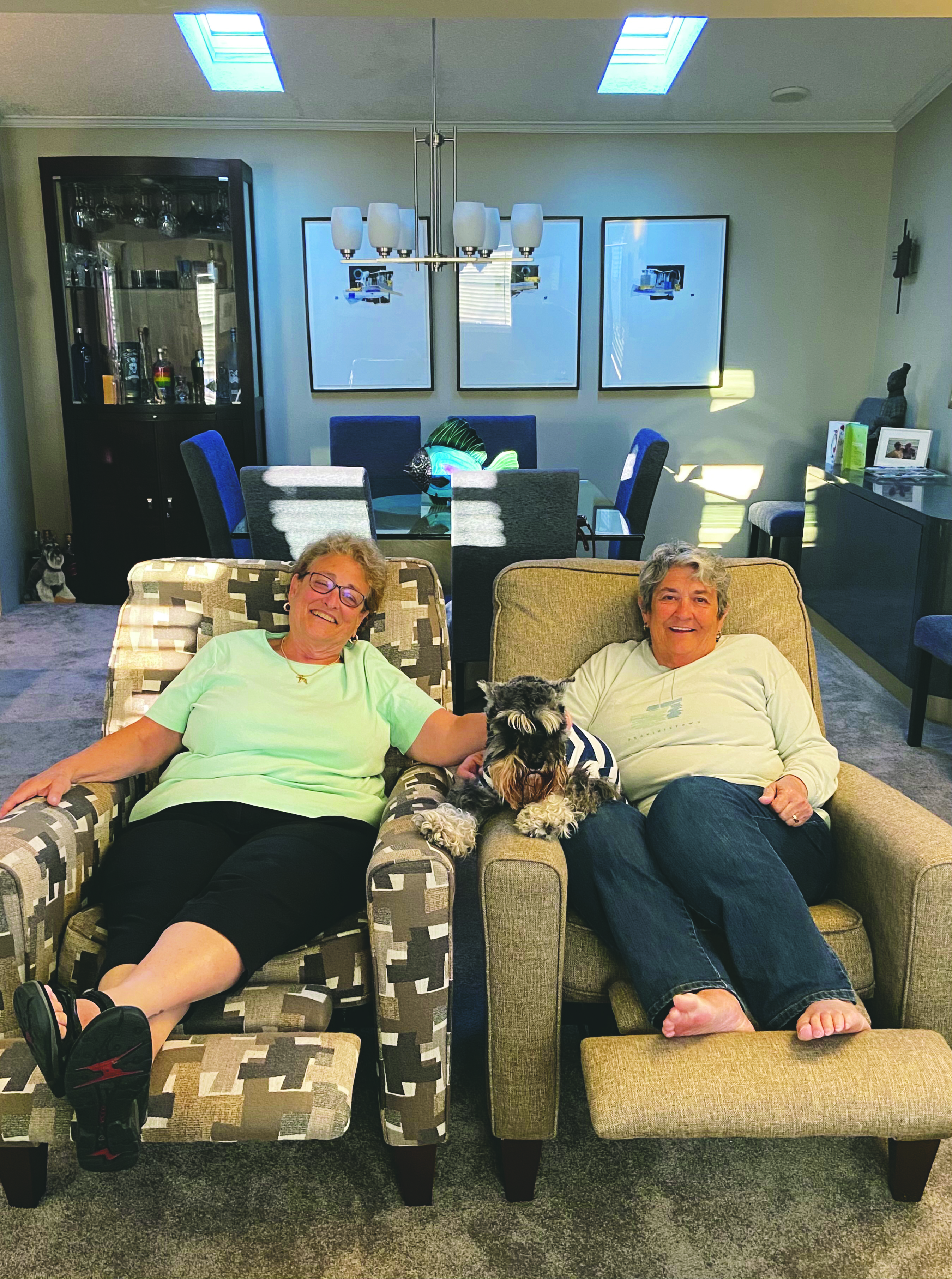 You’ve probably heard the “how many lesbians does it take to change a light bulb” joke. One punch line is: seven. One to change it, three to organize the potluck, and three to film an empowering documentary. How many then do you think it takes to renovate a trailer home? Well, if you’re Bonnie Quesenberry and Fay Jacobs, the answer is two. Bonnie to do the drywalling, the tile work, and the painting, and Fay to make lunch and pour cocktails. Ba dum tsh.

Bonnie and Fay need no introductions to most readers of this magazine. For 25 years, Fay has chronicled their escapades and activism beginning back when they literally motored into town on a 27-foot powerboat and docked in Rehoboth Bay. Since then, they’ve resided in a downtown condo, and a house in the ‘burbs. And since 2013, they’ve lived in a trailer home nestled among trees, lush lawns, and lots of gays and lesbians in a community called Aspen Meadows just off Coastal Highway north of Rehoboth. The gals fondly refer to it as the Greenwich, Connecticut of trailer parks. I thought it’d be fun to check out their “wheel estate” and see what they’re up to, now that they’ve returned from Florida.

When I arrived, daffodils were blooming everywhere, and the cherry trees and teacup magnolias were just starting to bud. First things first, though, we fixed drinks. Scotch for Bonnie and vodka for Fay. I opted for bourbon. Very Greenwich.

“Our friends thought we were crazy to buy this old trailer,” Fay tells me. “So did our realtor. But Bonnie had the vision. After living on a boat and tooling about in an RV, she was convinced it would work for us and we could turn it into something special without spending a lot of money. Never, in our 39 years together, had she let me down. So, we whipped out the check book and bought ourselves a trailer.”

Trailers started off as a hobby for rich industrialists like Henry Ford and Harvey Firestone. But the real explosion began in the 1950s, as companies, especially in the Midwest, began manufacturing trailers that looked more like homes on the inside. The industry even began referring to them as "mobile homes" instead of "trailer coaches." The first official mobile home subdivision opened in 1954 in Bradenton, Florida.

The gals show me some “before” photos of their 1980s-era trailer. Lord, child, it needed work. The place was dark with paneled walls, carpeting, and wallpaper. “The big problem was the ceiling. I’m only 5’2” and the place felt claustrophobic,” Bonnie says. “But I knew if we put in a cathedral ceiling with sky lights, blew out a wall and added some windows that it would open up the entire place and we could be very comfortable. After those big items, the rest would be easy.”

As you might expect from a woman who ran her own dental lab and served in both the Army and the Navy, Bonnie rolled up her sleeves and went to work. With the help of a contractor, they raised the roof and expanded the living room. Bonnie opened up the small, cramped kitchen and even found a way to fit in a nice-sized island with seating and pendant lighting. Now it’s all open concept. A neglected screened porch became a multi-season sunroom with outdoor seating and dining. When it was time to renew the loo in the master bathroom, Bonnie discovered the floor beneath the toilet was rotted from moisture (coming up from underneath, of course). “I’m convinced it was only a matter of time before I tumbled through in the middle of the night and ended up beneath the trailer,” says Fay.

The end result of all their work is a place that feels light and roomy. With three bedrooms and two bathrooms there’s plenty of space for them and their multitudes of friends. The color palette they chose—tans and whites—provides a modern feel and really shows off their collection of local art and schnauzer paraphernalia. Yes, you heard me correct. The gals are mad for this intelligent, dignified-but-playful dog breed. Windsor now being the current schnauzer-in-chief.

There's a whimsical vibe about it all, not too serious, which befits the playful couple. I love the fact that they went out and bought big recliner chairs for binge watching shows during the pandemic, thereby creating their own version of a media room. And, despite the fact that Bonnie did the lionshare of the reno work, I know it was truly a team effort.

So, what’s next? Fay is looking forward to the opening of the community pool this summer and getting up to New York whenever Broadway reopens. “Our goal when downsizing and moving to the trailer was to spend less time on house projects and more time traveling and having fun.” Bonnie concurs, then quietly shows me the popcorn ceiling in the master bedroom when Fay isn’t looking. “It won’t be too hard to sand down,” she says with a smile and a twinkle in her eye. “It’ll be fun.” With these two, I’m sure it will.