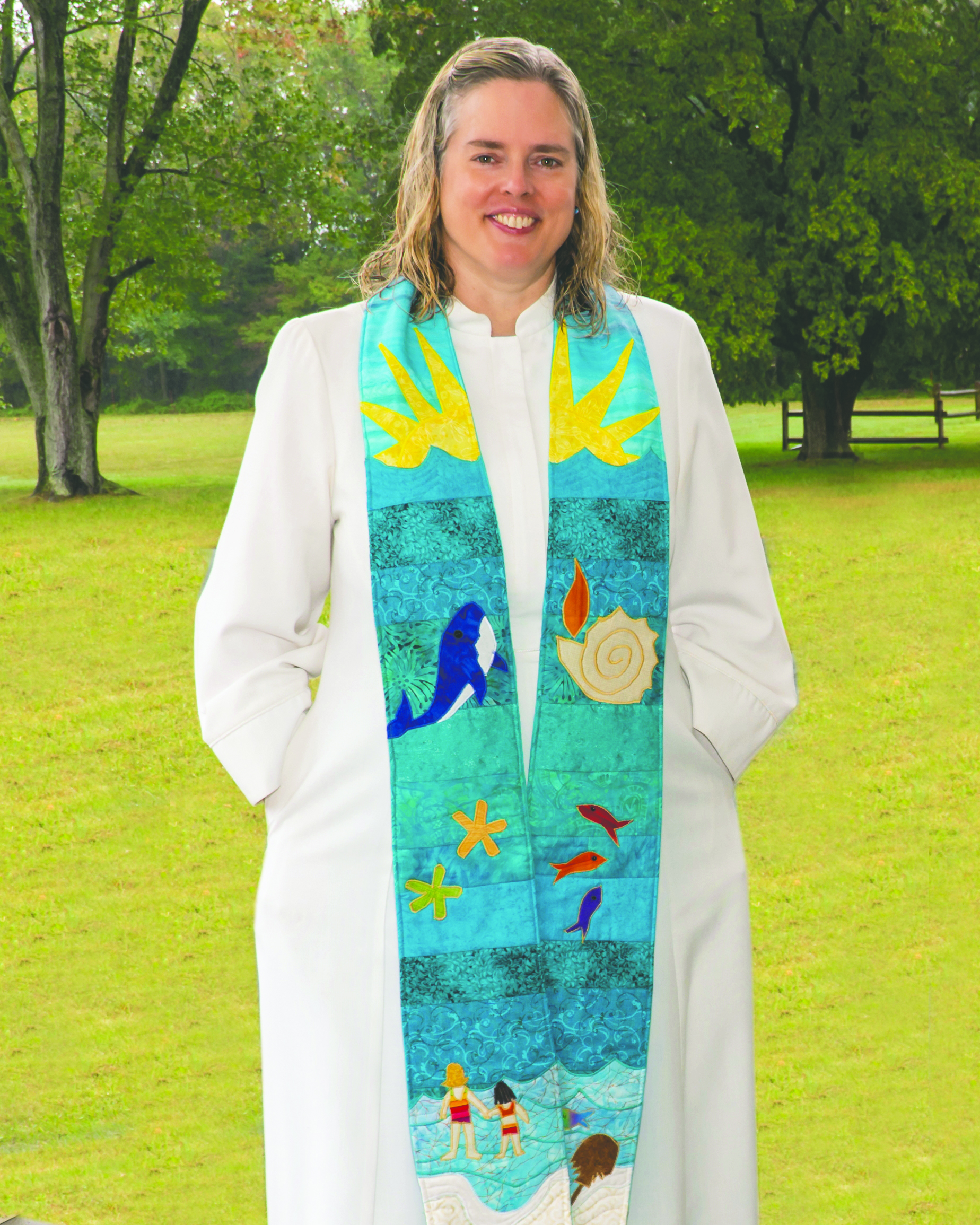 A Woman of Substance

May I move gently through this cloudy, murky, gray day.
May I remember that this is just one day,
and that showing up is at least half of what is asked of me.
Reverend Heather Rion Starr

She is the Reverend Heather Rion Starr (she/hers), and she is a woman of substance.

Reverend Heather, as she likes to be called, is the Settling Minister of the Unitarian Universalists of Southern Delaware (UUSD). Rev. Heather was called as its new Settled Minister in May 2021 and joined UUSD in August 2021.

She has worked in places as diverse as Oregon, Idaho, Minnesota, and Connecticut, sometimes simultaneously! With all that moving around, how did she end up in Delaware, or Dela-Where?, as she playfully calls it?

She and her spouse, Rev. Cathy Rion Starr (they/them), weren’t planning to move here originally but found the challenges of ministering here enticing. Being in a large LGBTQ community was exciting (UUSD’s history includes a rainbow umbrella on the beach). The energy of the congregation was appealing and the fact that UUSD is the only congregation in the geographic area provided the challenge of figuring out how to relate and be responsive to all of the congregation.

And then there’s family. Rev. Heather and Rev. Cathy met in 2010, fell in love, then married in 2012. They have two children, Robin and Braden. They identify as a Queer Family. Each of them birthed one of their children, and for each of them they went through the costly and complex process of second parent adoption, so that hopefully no matter what happens or where they live, their relationship with their children as equal parents will be honored.

Rev. Heather points out, “I have already experienced ways in which having gone through this process has deepened my understanding of what more and more parents go through these days as we work to create the families we’ve dreamed of.” Having two young children helps her maintain her balance (“it’s not about me!”), and only working in one congregation means more bedtime parenting.

Rev. Heather feels particularly called to serve multigenerational congregations interested in engaging with what it means to keep evolving into this complex twenty-first century. She says, “How do we need to transform ourselves and our institutions in order to become more relevant to the concerns of our time? How do we address the countless and also unique needs of our geographically-based communities during an era when so many of our connections with others take place in the disembodied realm of the internet? How do we keep grounding ourselves in the core values of our Unitarian Universalist faith and recommitting ourselves to love one another well?”

So, what is a Unitarian Universalist? Whoo, that’s a tough one. Rev. Heather explains that prior to 1961, Unitarians and Universalists were two separate entities. You could have two separate churches in one town. The Unitarian belief that reason, and not creed, defines the search for truth, and the Universalist belief that God embraces all people equally has led to the current Unitarian Universalist belief that truth and spiritual meaning can be found in all faiths. Even atheists are welcomed into the fold. The joining of the two religions in 1961 by a merger between the Universalist Church of America and the American Unitarian Association led to this revelation. It’s a little more complex than that, but that’s it in a nutshell.

Unitarian Universalists are committed to Seven Principles that include the worth of each person, the need for justice and compassion, the right to choose one’s own beliefs, and the search for truth and meaning. The principles are not doctrine, but rather a guide for those who choose to join and participate in Unitarian Universalist religious communities.

Rev. Heather mirrors these principles in all she does. She is in her 17th year of ministry, and is a lifelong Unitarian Universalist. She was very active as a child in the First Unitarian Church of Portland, Oregon. She began her journey towards the ministry in 2000, and entered seminary as a full-time residential student at Starr King School for the Ministry in the fall of 2002. She was ordained a Unitarian Universalist Minister by the UU Fellowship of Central Oregon on April 29, 2007.

One last thought from this woman of substance, this new resident of our beach, Rev. Heather:
May what little I do today be for the greater good.
May I be gentle with others today as I long for others to be gentle with me.
May it be so. ▼