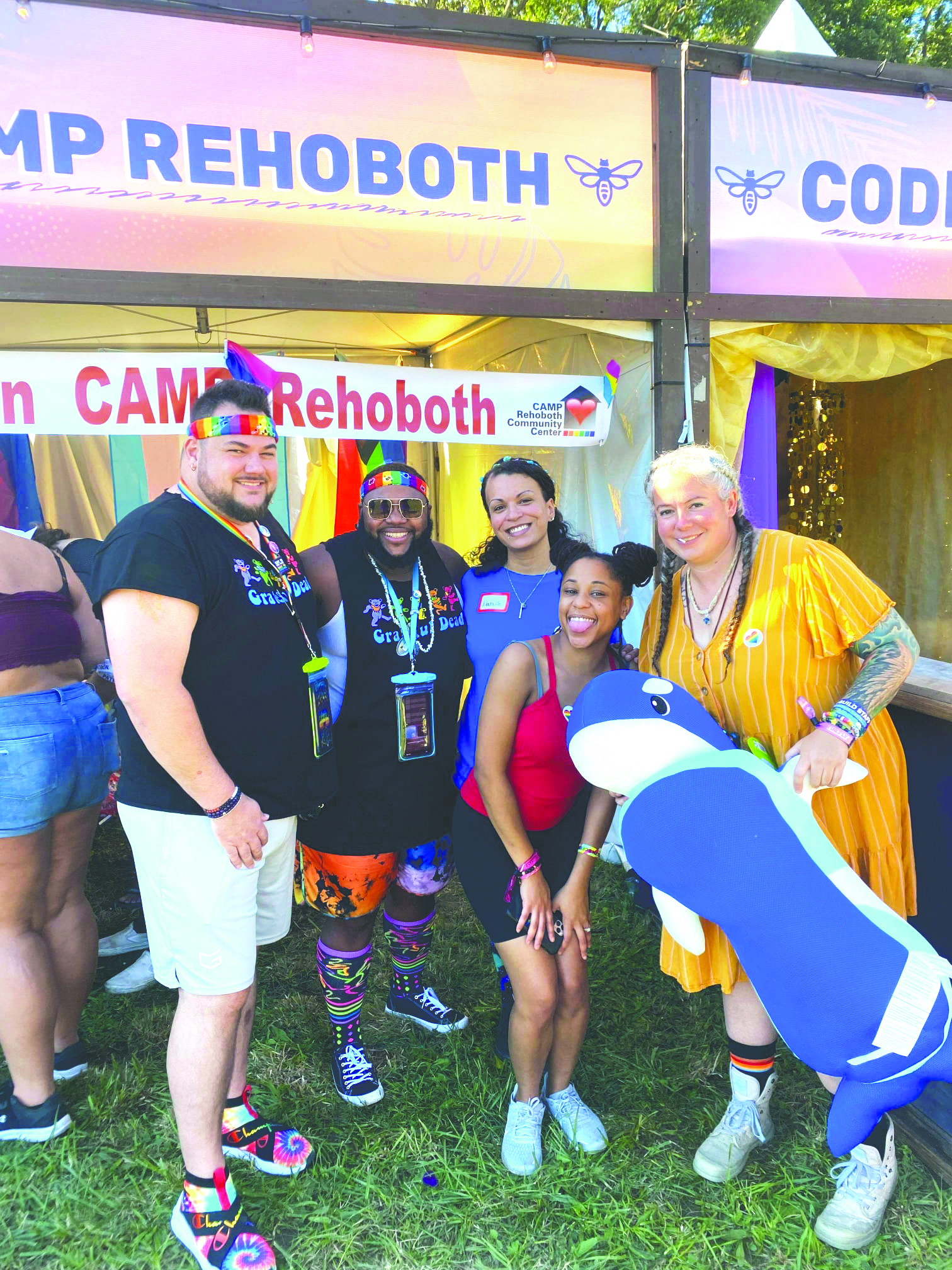 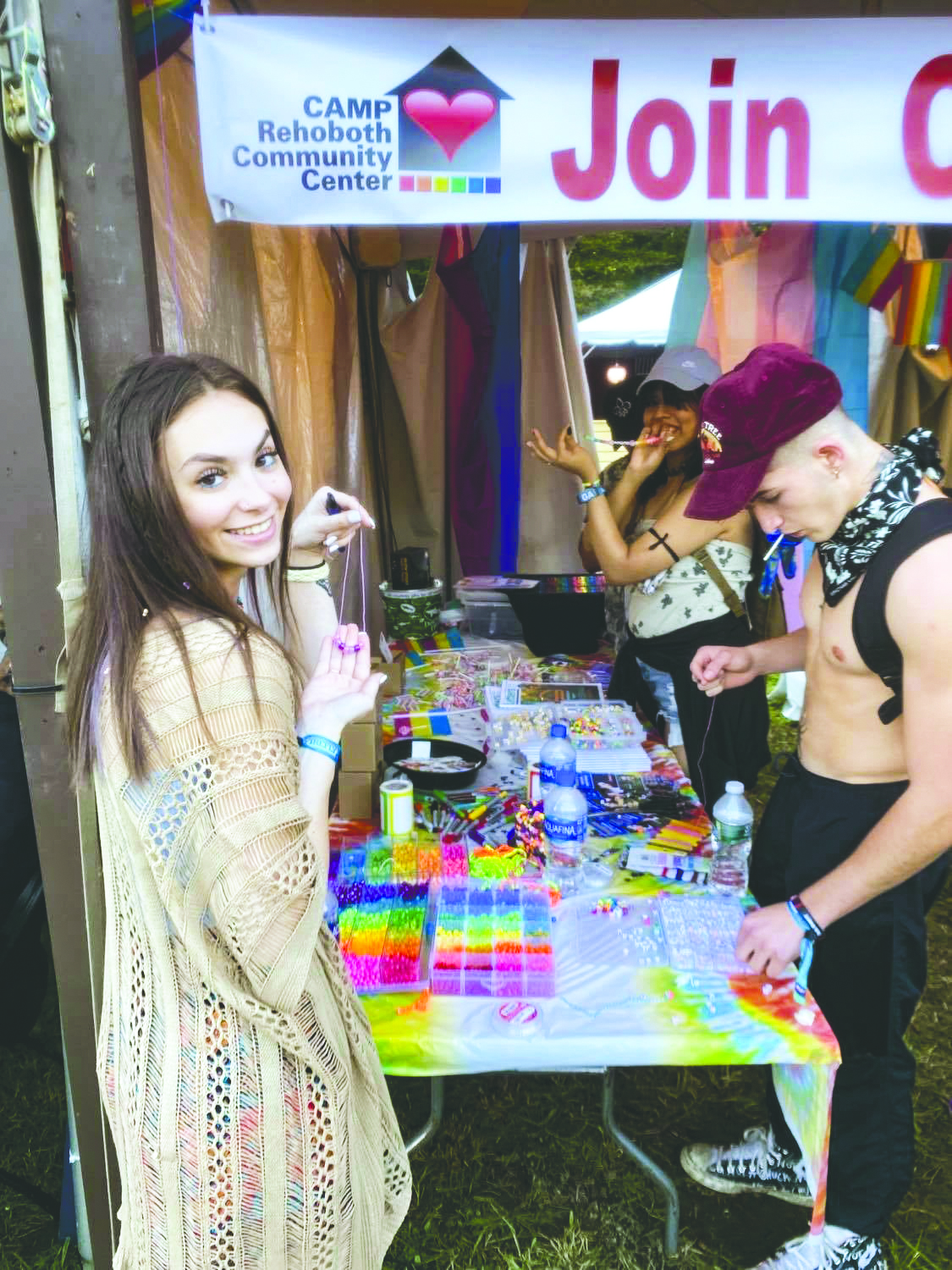 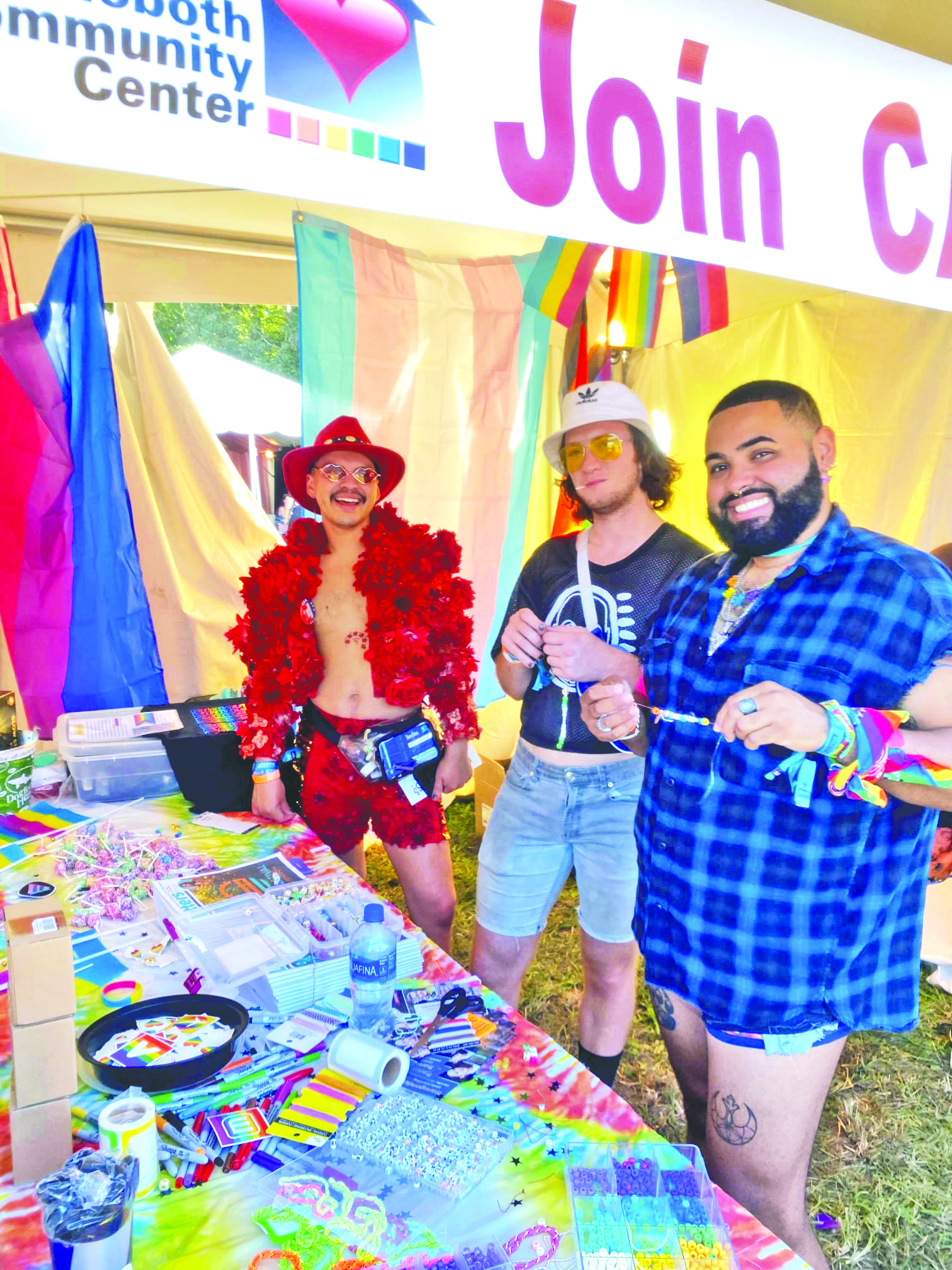 From September 23-26, the CAMP Rehoboth Young Professionals Group staffed a booth at the Firefly Music Festival in Dover, Delaware. This year’s festivities marked the first time any major music festival boasted a Pride Parade, and it also marked the first time Firefly introduced The Good Hub, where non-profits could raise awareness and educate attendees about their individual causes.

“Music is one of the strongest things on Earth that can bring people together; everyone should feel safe to participate in that,” said Michelle Manfredi, who organized CAMP Rehoboth’s booth. Michelle is an art teacher, a member of CAMP Rehoboth’s Young Professionals Group, a youth advocate with the YOUTH Up program, and an artist with CAMP Rehoboth’s Handmade Market.

“I’ve always felt at home at Firefly, but this year was special,” Michelle said. “I felt represented and seen. I cannot wait to see what Firefly has planned for next year,” she added. ▼

Coming out of hibernation, this year’s Bear Weekend was a great success for the Rehoboth Beach Bears. Featuring social events at The Pines, Atlantic Sands Hotel, and the Elkins-Archibald Atrium, the week united a community that had been missing these celebrations during a year’s absence.

Michael and Casey Tie the Knot! 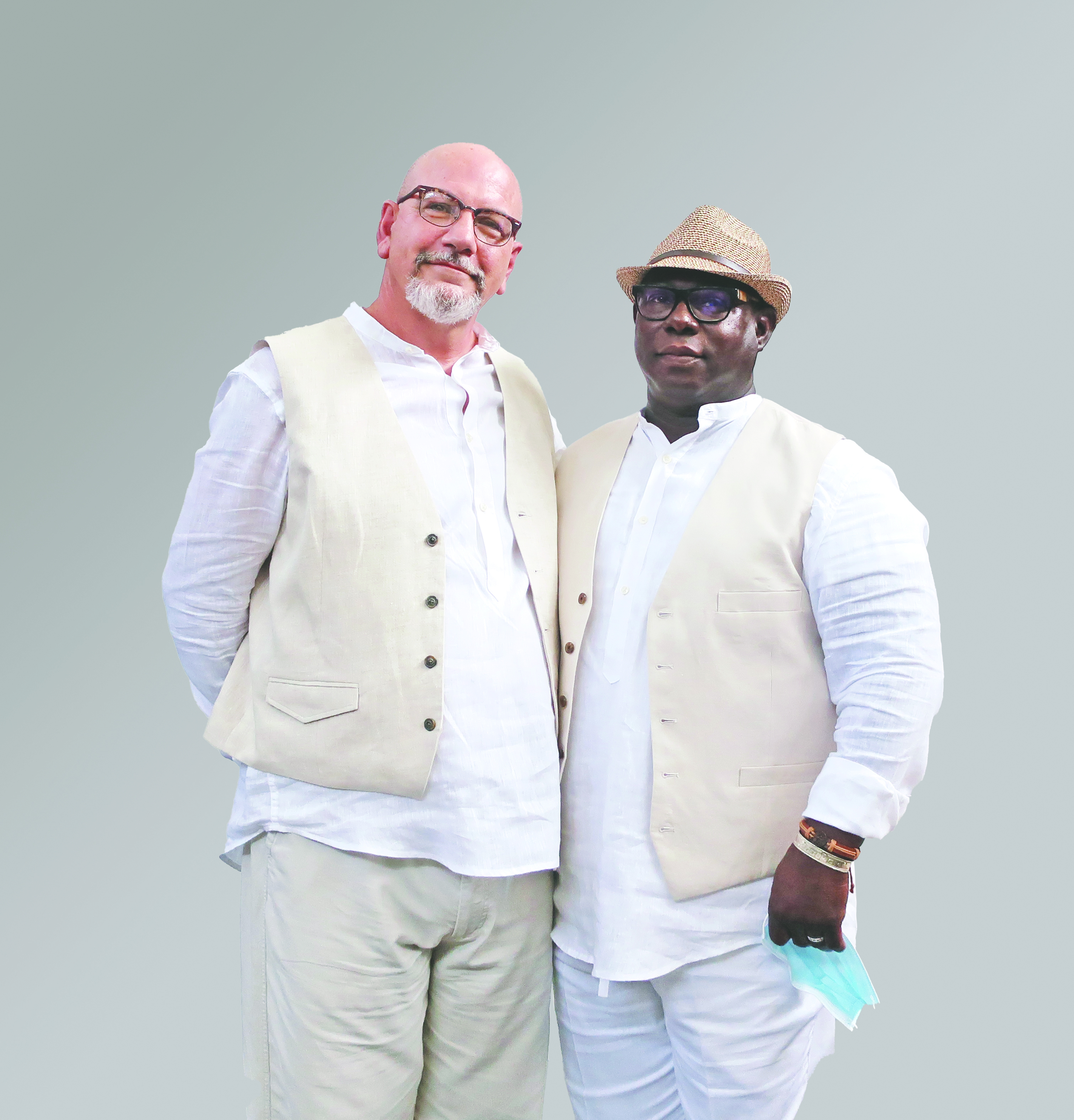 After 33.33 years together, Michael Breeland and Casey Warner of York, Pennsylvania, were wed in a ceremony in the CAMP Rehoboth Elkins-Archibald Atrium on September 16. The private ceremony was officiated by Glen Pruitt. The couple lit candles to honor their union and were surrounded by a small gathering of supportive friends and family.

CAMP Rehoboth Has Its Own Dogfish Head Beer

You read that right! CAMP Rehoboth has its own beer this season, launched on October 20. Not only did a percentage of all food and beverages from the October launch event benefit CAMP Rehoboth, but through the end of December, a percentage of each sale of the seasonal Au Courant beer sold will also help support CAMP Rehoboth’s community services and health and wellness programs.

CAMP Rehoboth staff and volunteers were not the only ones disappointed when the threat of weather forced the cancellation of the much-loved and long-anticipated Block Party 2021. Supporters expressed their disappointment over the cancellation of the beloved CAMP Rehoboth event. “It was a very difficult call to make,” said Board and Event Chair, Chris Beagle. “But we had to look out for the safety of our vendors, volunteers, and participants.”

Approximately a quarter of the vendors had decided to cancel their participation and a third of the entertainers had done the same prior to the full event being cancelled late-evening, October 9.

A big thanks goes out to all of the vendors, performers, and sponsors who had planned to participate. CAMP Rehoboth Development Director Anita Broccolino added, “We were fortunate to have great support this year for the Block Party from many previous—and even a few new—sponsors. Sponsors included Beebe Healthcare, IG Burton Mercedes and BMW, COMPASS/Chris Beagle Group, The Pines, RB/AQUA, ToneyTotal Health, Coastal Care Dermatology, and Lighthouse Catering.” ▼

On October 2, Delaware Pride celebrated being out, visible, and proud. The event took place at Legislative Hall in Dover, and the day’s festivities included performances by Magnolia Applebottom, Miss Troy, Manhattan Prairie Dogs, Josh Zuckerman, Anthony Cherri, and many more.

To the Editor:
I read with interest Stefani Deoul’s article in the September 24th edition of Letters regarding #18IsLife. It was a timely piece and I appreciate her attempt at educating the readers about the Jewish tradition of donating in multiples of 18 to honor life in all forms.

Ms. Deoul missed an opportunity to highlight some of the good work that Seaside Jewish Community does in Sussex County. We have over 600 individual members and have an active partnership with Epworth’s food rescue and soup kitchen. Many of the food rescue and soup kitchen volunteers are members of Seaside. Our Chesed and Community Services committees often support efforts such as providing meals to Code Purple during winter months and clothing drives for Clothing Our Kids.

We also have a strong relationship with other faith partners in Sussex and Kent Counties and play a major role in planning Peace Week Delaware every year.

Seaside Jewish Community also welcomes and embraces members of the LGBT+ community. Our Social Action Committee sponsors Pride Shabbat which coincides with Delaware Pride and honors the lives and memories of those who have worked for equality and died because of acts of hate toward our LGBT+ martyrs.

Seaside Jewish Community is a place for all and we look forward to meeting members of the community who have not yet visited us during any of our programs or events happening throughout the year.

To the Editor:
Unbeknownst to most, I have been conducting an experiment of sorts. In fact, you may already have taken part. Upon moving to Rehoboth Beach with my husband Mark in 2019, I decided to immerse myself in the small town feel by smiling and saying “Hello” to those I pass on the street. My smile’s neither that of a Cheshire cat nor is it that of a slick salesperson but rather it’s an expression of the joy I feel living in such an awesome LGBTQ community such as ours.

So as not to startle anyone, I wait for the passerby to become aware of me. Then, instead of looking away and ignoring the person, I allow a gentle smile to appear upon my face followed by an equally sincere greeting. Then something unexplainable happens. While the entire interaction takes mere seconds (between the moment the first connection is made until the moment when the other person smiles) time actually seems to slow down.

It’s like I’m Jaime Sommers from The Bionic Woman, and the two of us are moving in slow motion. Equally as fascinating is the genuine gladness on the faces of those who do return a smile. That initial joy of living in Rehoboth, mentioned earlier, is now ricocheting from them right back to me. Simply astounding.

My success rate is hovering in the vicinity of 40 percent. Of the 60 percent of “non-smilers,” most simply ignore me. The rest interestingly enough look puzzled. It’s this latter group that both saddens and spurs me on.

Please receive my smile in the spirit in which it is intended. Take it with you and pass it on. I am looking forward to the day when someone catches me off guard by offering a friendly smile and “Hello.” Will it be you?