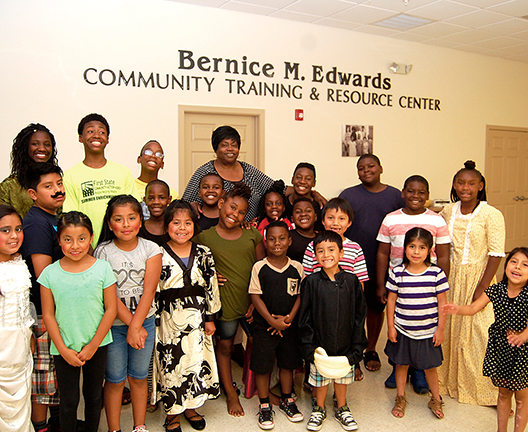 After a very successful capital campaign, First State Community Action Board of Directors honored Bernice Edwards by naming the First State Community Action Agency Center in her name—but rather than look up at her own name, Bernice much prefers to gaze down at those smiling ebullient children who just exited the stage—kids having performed for their parents and grandparents at the summer’s final event. After she extends her kudos to the kids and the partners who helped pull it off, she escorts me around the perimeter of the room, proudly pointing out all the signed artwork created by these same children and inspired by artists from the Rehoboth Art League.

Bernice brings her wise decades-long perspective as a case worker. “With all the static and outside influences in a child’s life today, they really only reach new heights when they can actually express themselves—and their talents often surprise us all.”  Indeed, these kids are brimming with self-esteem at summer’s end.

It’s no wonder Rehoboth’s Marcia DeWitt, president of the Biggs Museum board sought to harness such a committed community leader to shape the museum’s outreach to children. “There is simply no better advocate for social justice in our community. As we study the research findings on how museums positively affect low-income children, Bernice’s leadership role on our board is vital to the strategies we employ moving forward. I expect to reach a lot more children as she helps us shape that future for the museum and the kids. Between our permanent collection and the high-profile traveling exhibitions, we have such a valuable resource for Sussex County schoolchildren.”

The study DeWitt cites is from none other than the Walton Family Foundation of Wal-Mart fame. When the family opened the Crystal Bridges Museum in Bentonville, Arkansas five years ago, they endowed the entire cost of field trips for most of Arkansas and the southern part of Missouri—including funding for the busses, admission, lunch, and the substitute teachers— all of the financial issues that vex most school districts. Capitalizing on this massive influx of school children, the museum’s education staff studied the effect of school trips on children in K-12 and published the findings with the American Alliance of Museums.

The study shows that field trips boost students critical thinking skills, enable them to demonstrate higher levels of tolerance and exhibit increased “historical empathy”—which is defined as the ability to appreciate what life was like for people who lived in a different time and place. Children with resources are more likely to be availed of the museum experience. So it’s no surprise that across all of these areas, the affect was more pronounced on disadvantaged children from rural areas and in high poverty. Simply put: families that have neither the resources nor the inclination to visit a museum rely more heavily upon the school field trip to open windows of opportunity for their children. The Biggs Museum is following the principles of that study to map out a plan for Delaware’s youth.

The Community Action Agency, founded in Sussex County in 1964 during LBJ’s War on Poverty, is the first and only federally recognized community action agency in the state. Now operating offices in Dover and New Castle, the agency is no stranger to the pervasive problems of fair housing and employment. While a field trip can seem like “fluff” to some, many education experts beyond Crystal Bridges point out that while employment skills are of the utmost import, a community benefits greatly from well-rounded citizens who appreciate the entire depth of human accomplishments- and indeed strive for those goals. “I look at all the terrific education programs that the agency already has in place and certainly want the Biggs to help build upon that dynamic” says DeWitt.

Bernice looks back at her early career as a family case worker in the field and recalls a young woman who literally lived in a rural home that leaned to one side. From the outside, Bernice wondered how the family lived there, but the father worked nights and the mother was a matriarch with a capitol M. With the agency’s help, that young woman turned adversity, poverty, and despair into “a bachelors, a masters, and a doctorate.” She recently returned from her happy home in Florida to keynote the agency’s annual awards dinner.

“There wasn’t a dry eye in the house,” Bernice says with a knowing smile. And that’s why you’ll find the indefatigable Bernice Edwards always on the go—meeting with policy makers, foundations, and any museum or cultural arts venue that wants to join her in making a difference.