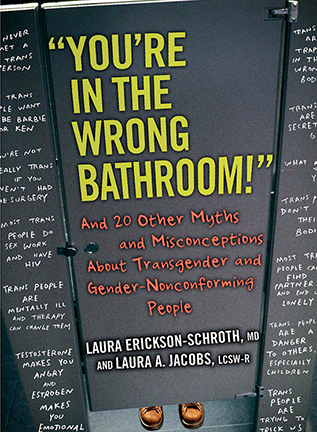 You’re in the Wrong Bathroom! And 20 Other Myths and Misconceptions About Transgender and Gender-Nonconforming People by Laura Erickson-Schroth, MD and Laura A. Jacobs, LCSW-R
c.2017, Beacon Press; $16; 182 pages

How does that work?

When you were little and that question arose, you simply took things apart— but that didn’t always work so well. In You’re in the Wrong Bathroom! by Laura Erickson-Schroth, MD and Laura A. Jacobs, LCSW-R, it’s time for different way of seeing things.

That’s approximately how many transgender individuals live in the U.S. “Chances are,” say the authors, “you’ve met one (or more) of them,” and you didn’t even realize it. So why do many people think they don’t know anyone who’s transgender?

The answer goes back to a 1960s-era estimate that didn’t take race or economics into account, and that may still lead to myths and wrong assumptions. Misunderstandings happen because of that old study, lines blur, and “It’s crucial to ask ourselves why it bothers us so much…”

It’s a myth to believe that any single thing can define a “trans” person, say the authors. Each individual decides on who they are or will be, what they’ll be called, whether to have surgery, and how they’ll dress. And no, you cannot ask what’s in their pants, but you can respectfully inquire about preferred pronouns.

The sexuality of a transgender individual may be complex, say the authors, or it may be a fluid process filled with surprises, but transitioning isn’t a way to “trick” anyone into anything. Disclosure to friends, family, and potential mates is likewise not easily defined, so it’s best left to the individual. Obviously, none of this is “easy.”

Trans people have been around for centuries and were once revered in various cultures throughout history. They are not “broken” or “trapped in the wrong body” and they do not need to be “fixed.” They’ve gone through many steps to transition, and the vast majority will not have regrets for it. And using “safety” as an argument for denying them bathroom usage is incorrect—unless you’re talking “safety” for the trans individual zierself.

Questions. You’ve got a zillion of them and, especially if you’re transitioning or thinking about it, so do your friends and family. You’re in the Wrong Bathroom! can answer twenty of them.

Beginning at the basics with “Identity,” authors Laura Erickson-Schroth and Laura A. Jacobs take the most common lore about the “T” in LGBT and gently correct any wrong beliefs that may be lurking in readers’ minds. That’s a good start, but there were times when the authors seemed too nice; more adamant language could have been appropriate. Even so, there’s a good sense of mind-easing in most cases here, followed by a carefully-measured MYOB tone. At some point, then, and no pun intended, this book transitions more toward gender-nonconforming readers and less for cisgender folks, allowing the latter even better insight.

There’s a lot of education as well as food for thought inside this book, for those who’ve transitioned as well as those who are pondering it and for their loved ones. If you need something to help set the naysayers right, You’re in the Wrong Bathroom! will work.