Who gets to be an action hero? That’s the question Lone Star Bull, currently in production, plans to explore when it eventually hits theaters near (one hopes) you. The debut feature from filmmaker David Stoddart, written by brothers Edward and Rory McHenry (creators of the World War II puppet comedy Jackboots on Whitehall), tells the story of a former military man turned nightclub bouncer, a medical student who does drag at the bar, and the mission of vengeance they undertake when the club owner is shot during a homophobic attack.
The film stars four queer actors: Brothers and Sisters alum and Hallmark Christmas movie mainstay Luke Macfarlane, Molly Bernard (Younger, Transparent), Mad Men co-star Bryan Batt, and drag superstar D.J. “Shangela” Pierce. In a genre that has historically had little desire to engage with queer characters or themes, what we’re hoping for here is a little bloodlust and vigilante justice from some pissed off homos with very particular sets of skills. We’ve earned it. ▼

NBC streaming service Peacock is throwing its hat into the Christmas movie ring with a brand-extending concept: take sister network Bravo’s realest housewives and allow them to ruin Christmas for anyone who gets in their way. That seems to be the promise of Real Housewives of the North Pole, starring Real Housewives of Beverly Hills glamourpuss Kyle Richards and Breaking Bad alum Betsy Brandt. They’ll play two women who’ve won the holiday house decorating contest for a decade in the town of North Pole, Vermont, only to find themselves in a knock-down-drag-out, friendship-ending fight that splits the town into feuding factions. Shooting soon, we want this fight before Christmas on our screens by December if only to spill a little corrosive acid on the cozy genre that seems to dominate TV for the last hundred days of the year. ▼

Harry Styles is My Policeman

Legendary gay novelist E.M. Forster penned classics like Maurice, Howards End, and A Room with a View, but he had as complicated a personal life as any queer person in the middle of the 20th century. His longstanding relationship with police officer Bob Buckingham, as well as with Buckingham’s wife, May, became the inspiration for Bethan Roberts’ novel, My Policeman.

Currently in post-production, the film version of that novel is the kind of openly queer production that the book’s fictional protagonists could only dream of. Starring Harry Styles and Linus Roache as younger and older versions of Tom, the titular cop, the film also features queer, non-binary actor Emma Corrin (Princess Diana on The Crown) and Gina McKee as younger and older versions of wife Marion, with David Dawson (The Last Kingdom) and gay screen vet Rupert Everett as the man who becomes involved with the ostensibly heterosexual married pair. Adapted by Philadelphia screenwriter Ron Nyswaner and directed by gay filmmaker Michael Grandage (Genius), we’re looking for this to do for bisexual poly relationships what mainstream queer filmmaking almost never does: get it respectfully right. ▼

Madonna’s Madame X Documentary Gets Into the Groove 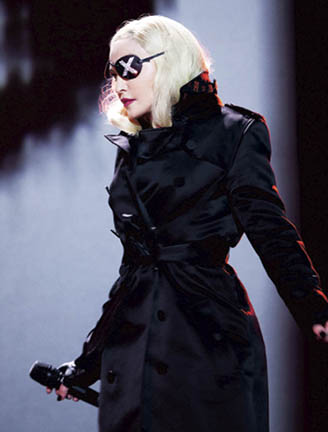 Did you miss Madonna’s “Madame X” tour? The album? Well, now’s your chance to get acquainted with it when Paramount+ drops her tour documentary, also called Madame X.
Shot during the Lisbon dates of her 2019 concert tour, the spectacle of it all incorporates a lot of high-concept sets, costumes, musicians, and dancers (48 of those, to be exact). Directed by Portuguese photographer Ricardo Gomes in collaboration with SKNX, the team that created Amazon Prime’s documentary, Madonna—World of Madame X, the concert film will showcase the ambitious concept album’s influences rooted in international pop. Ms. Ciccone has stated that she hopes the film will “remind us of the sacred bond of our shared humanity,” which is an appropriately grandiose goal, and nothing less than what we’d expect from a woman who’s never aimed for the small gesture. The movie arrives October 8 on Paramount+ and we’ll be there, lounging on our couch, watching the hardest working pop star in the world refuse to stop making noise. Long live the queen. ▼

Romeo San Vicente is waiting for you to justify his love.