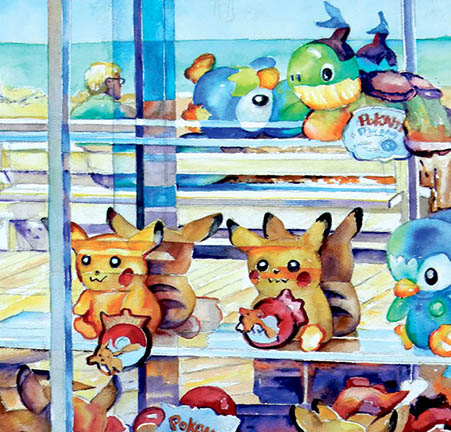 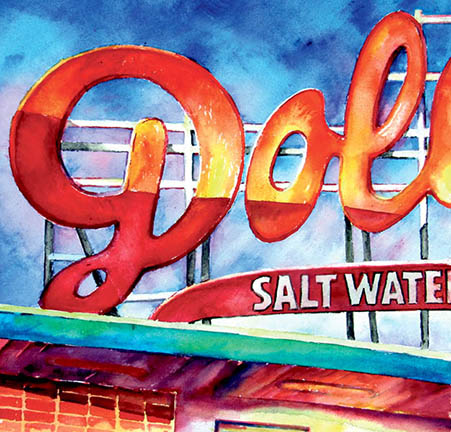 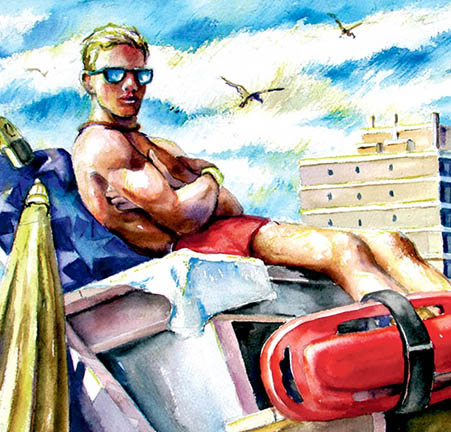 If you’ve been around Rehoboth for a while, you’ve undoubtedly seen artist Rod Cook’s watercolors depicting iconic local scenes. Perhaps in a friend’s home or on the cover of Letters. Possibly at the Back Porch during his four-week summer show or at the Sundance auction where he has donated a watercolor each year and will again this go round for the re-tooled Sun Festival benefitting Camp Rehoboth. Maybe you even own one yourself. I purchased one recently and it got me thinking that a story about Rod and his husband Charlie’s abode would be a fitting one for this edition of Letters.

The first thing I noticed when I walked into Rod Cook and Charlie Browne’s home was the art. It’s everywhere—on the walls and stacked on the floor. There are even watercolors hanging in all four bedrooms and in the bathrooms. “We artists require lots of space,” Rod says, with a chuckle.

The house, in fact, was built 24 years ago with art in mind. The big open space living room/dining room functions as a gallery with its white walls, hardwood floors, and track lighting. There is plenty of space for entertaining. Big windows on three sides bring in lots of natural light. A full basement has been fitted with special raised wooden ledges to house Rod’s artwork and supplies. A guest room doubles as a studio. The fellas even put spotlights in the downstairs bedroom. To highlight the art, of course….

Yet despite how it sounds, it’s not a contemporary house. “We wanted it to look like a Rehoboth cottage,” Charlie explains, “the kind of casual beach house we loved and rented for years…. So, of course we made sure it had a big screened front porch with ceiling fans, plenty of bedrooms for guests, and green space outdoors to grow all kinds of colorful summer flowers.” I look around. Flowers and art are indeed everywhere. The furnishings are subtle neutrals so as not to compete. The vintage Heywood Wakefield rattan furniture catches my eye—family pieces Charlie inherited. They remind me of the beach cottages on Alligator Point on Florida’s Gulf Coast where Charlie’s family (mine too!) had summer places.

There isn’t a pool because the guys built back when the beach was the epicenter of gay life in Rehoboth. In those days everyone spent long languorous days on Poodle Beach before heading home to moisturize and then out for happy hour to socialize at the Blue Moon, followed by dinner and a themed house party and finally late-night maneuvers at the Renegade or the Strand. “Those were heady days,” Rod remembers. “Sort of exhausting too, when you think back about it.… But back then we were so young!”

Rod and Charlie actually met as young ‘uns here in Rehoboth. The year was 1985. Charlie, originally from Georgia, was an attorney working in Washington, and Rod, a native Baltimorean, was teaching art at the Maryland Institute College of Art. And painting, of course, always painting. Both had been coming to Rehoboth for at least five years until their paths crossed one starry Saturday night at the Renegade. They’ve been together since.

After a decade of summer group rentals, the fellas decided it was time to set down more permanent roots. Rehoboth had become by then a place where plenty of gay men and lesbians lived full-time or owned second homes. CAMP Rehoboth was leading the effort to create a safe and welcoming community. Charlie, the planner of the two, realized the town wasn’t just for summertime anymore and might be a good place to enjoy the other seasons and eventually to retire in. They bought a lot in Country Club Estates, a South Rehoboth neighborhood that had grown up on the site of the original Rehoboth Beach Country Club and its 9-hole golf course, and they built their home.

Once they did, a funny thing happened—Rod became a local artist. Though known in Baltimore art circles, he wasn’t known in Rehoboth until artists Murray Archibald and his sister, Mary Beth Ramsey, introduced him to Joyce Felton, owner of the Blue Moon restaurant. “Joyce loved to feature local art in the Moon’s dining room,” Rod explains. “She offered me a show and that’s technically what launched me in Rehoboth.” And it’s really when he started focusing on Rehoboth subjects. People love them. For the past 12 years, he’s exhibited his new work each summer at the Back Porch restaurant on Rehoboth Avenue. “It’s such an iconic restaurant, the first to bring fine dining to Rehoboth, and it’s a fantastic venue to sip wine, socialize, and view art.”

While Rod painted, Charlie got involved in civic matters, eventually serving as president of the Rehoboth Beach Homeowners Association (RBHA) from 2009 to 2020. It’s notable because it shows just how much the town has changed and grown over the years. The Homeowners Association back in the late 1980s and early 90s was not very gay friendly. Members were fearful of the changes that might come to Rehoboth with more and more gay folk buying into town.

As I listen to Rod and Charlie talk, I’m struck by how their story is very much the story of gay Rehoboth and its growth from a summertime sojourn to a full-fledged community. And at the heart of their story is their house. Yes, it’s a spot for art, but it’s much more. It’s also a place where life and friends and family take center stage. “You know,” Charlie tells me, “We love that so many of our Baltimore friends from the early group house days still come and spend the summer with us. We go to the beach and then have cocktails and a big communal dinner, just like we did back in the day. We’re very fortunate because it’s really all we need or want.” Amen to that. “Well, a little more wall space would be nice,” Rod chimes in with a smile. ▼ 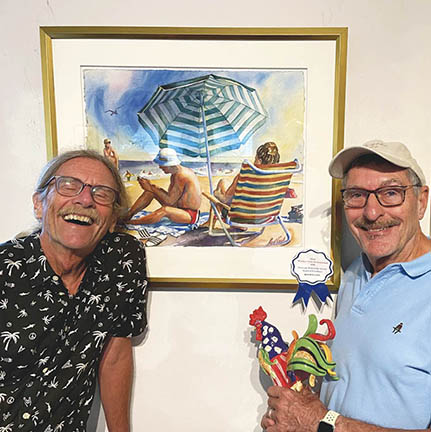