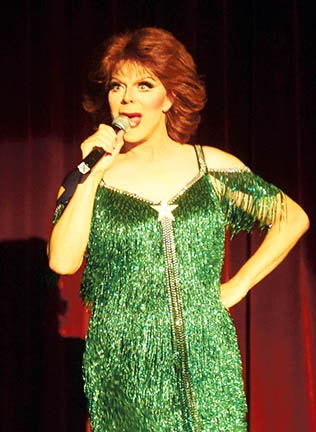 Christopher Peterson
An Icon Among Eyecons

I first met Christopher Peterson and the love of his life, the late James Mill, at the long-gone Renegade bar and dance club in 1998. It was Christopher’s first gig in Rehoboth with his brilliant female impersonation show.

At the time, I was directing musical revues at an Italian Restaurant, La Rosa Negra, in Lewes, and occasionally producing the revue Twisted Broadway at the Renegade. We did famous Broadway duets, usually performed by one man and one woman, our way, in same-sex splendor. At the time it was pretty unusual and pretty shocking.

Also shocking was the talent and brilliance of Christopher Peterson’s turns as Barbra, Cher, Julie, Liza, and Judy. I think Bonnie and I saw the show twice that first summer and followed Christopher over the years. He’s been at the Swan Ballroom at the Atlantic Sands, the Convention Center in CAMP Rehoboth Follies, special CAMP Rehoboth holiday shows and art show emcee, CAMP Rehoboth fundraisers, and special guest at CAMP Rehoboth’s 25th Anniversary.

All this, of course, with collaborator, tech director, and husband James at his side.

Now, sadly, Christopher is here for the first time without James, and we know how hard that must be for him. But of course, the show must go on, and Christopher is back on stage at Clear Space Theatre.

My old (and getting older) friends know I am a Judy Garland fan from way back. My sister and I used to laugh that we were the only two hippies (oh that word!) ever to get stoned and listen to Judy at Carnegie Hall.

Over the years, I waved to Christopher riding his bike downtown, ran into him and lunched at Lori’s, worked together as he emceed and performed in several versions of the CAMP Follies, and we became pals.

This summer, not only did Christopher bring his Eyecons show back to Rehoboth, but he is also starring in—and designed and built the costumes for—the Clear Space production of Priscilla, Queen of the Desert. For this costume-driven Broadway show, his costumes are the stars—along with great performances by Christopher himself and the wonderful Clear Space leads and ensemble. The dancing is thrilling and the classic disco tunes rock the theatre.

I don’t know if you can still get tickets this late, but go if you can. Go as well to Eyecons, which will be playing into September. There is no better Bette Davis impersonation anywhere. And reader, if you are too young to know Bette Davis, don’t tell me. Just go watch All About Eve. I also guffaw at his Cher and Liza. I’m seeing the show once more on Labor Day weekend.

As of now, I have no idea about Christopher’s future plans to return to Rehoboth going forward.

But I do know that for over two decades, Christopher Peterson has been a formidable force in Rehoboth’s LGBTQ community, especially supporting CAMP Rehoboth. He may not have been here full time, but the time he has put in with fundraisers, performances, support of our businesses, and decades of advertising in Letters, rivals many of us who have been here as long or longer.

Christopher is a Rehoboth EYECON. Thanks so much! ▼