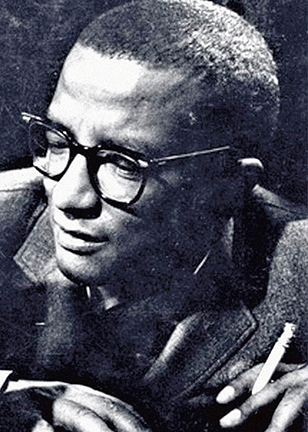 If you’re a lover of twentieth century big-band jazz, and you find yourself humming the Duke Ellington hits “You Can Take the A Train” and “Satin Doll” and the masterpiece “Lush Life,” you can thank Billy Strayhorn, the prodigy who composed and/or arranged all of them and many more. Strayhorn was a musical genius. Even Ellington thought so, calling Strayhorn “my right arm, my left arm, all the eyes in the back of my head, my brain waves in his head, and his in mine.” It is still disputed how many songs credited to Ellington were actually written, all or in part, by Strayhorn.

William Thomas Strayhorn, born in Dayton, Ohio on November 29, 1915, spent his formative years in Pittsburgh, Pennsylvania. His musical talent blossomed early. While a student at Pittsburgh’s Westinghouse High School, Strayhorn wrote a musical production and formed a trio with two friends, the songs provided by Strayhorn. The songs, and the trio’s musicianship, were good enough for daily sessions on a local radio station.

It was at this time, when Strayhorn was only 16 years old, that he began the music and lyrics to “Lush Life,” a song subsequently recorded not only by the Ellington orchestra but by over 500 other singers and musicians! Among them, no less than Ella Fitzgerald in 1957, Ricky Lee Jones in 1983, Patti LuPone in 1983, Queen Latifah in 1998, and Lady Gaga in 2014. A quick YouTube search brings up these and other performances. The recordings of this complex, intimate song continue.

Strayhorn attended the Pittsburgh Music Institute, becoming a classically trained musician and composer, a foundation which informed his jazz compositions and arrangements. Their sophistication is undeniable, respected then and now by jazz aficionados and classical musicians alike.

Despite all of the respect accorded Strayhorn for his musical accomplishments, a central aspect of his life was not always welcome: his homosexuality. In the often-macho world of jazz nightlife, where men were hip, cool, knowing, and in charge, and women were songbirds or sexy femme fatales singing wistfully about their men, there was no cultural space for a gay man. Duke Ellington, to his credit, clearly did not let that blind him to Strayhorn’s talent. The two worked together for decades, forming not only a deep musical bond but a deep friendship.

There were a few others who accepted―or perhaps conveniently ignored―Strayhorn’s homosexuality in order to work with the young genius. Aside from Ellington, Strayhorn’s most significant musical collaboration was with Lena Horne. She credits him, and his classical training, for helping to shape her sound and phrasing. It’s reported, moreover, by several sources of jazz journalism, that Horne was also in love with Strayhorn, a love she was painfully aware he could not return. They remained friends and musical collaborators, however, through the rest of Strayhorn’s life.

Strayhorn’s success as a composer and arranger couldn’t shield him from the stresses mid-century America imposed on a Black, gay man. Unsurprisingly, Strayhorn took refuge in alcohol with increasing frequency. His first significant relationship, with jazz pianist Aaron Bridgers, whom Strayhorn met in 1939, ended when Bridgers abruptly left Strayhorn and moved to Paris in 1947, the breakup possibly due to Strayhorn’s drinking.

But Strayhorn’s heartbreak couldn’t stop his prodigious talent. Songs for Duke Ellington and other orchestras and singers continued to pour forth. His music served another avenue, too: the burgeoning politics of civil rights. In the 1940s, he collaborated with the NAACP in its voter registration drives. Later, in collaboration once again with Duke Ellington, he created musical events for Dr. Martin Luther King, with whom he became a close friend. In 1963, Strayhorn played for Lena Horne’s concert for civil rights in Jackson, Mississippi.

The stresses of his life, and the excessive drinking and smoking, eventually caught up with Strayhorn. He was diagnosed with esophageal cancer in 1964. Fortunately, he did not have to face the illness or his final years alone. Bill Grove, his partner at the time, was with him when Strayhorn died on May 31, 1967.

Throughout history, our LGBTQ+ community has certainly had its share of creative geniuses. Billy Strayhorn, that Mozart of jazz, occupies a distinctive place in that brilliant company.  ▼

Ann Aptaker is the author of short stories and the Lambda & Goldie award winning Cantor Gold series Murder and Gold. The latest in the series, Hunting Gold, was released in July 2022.