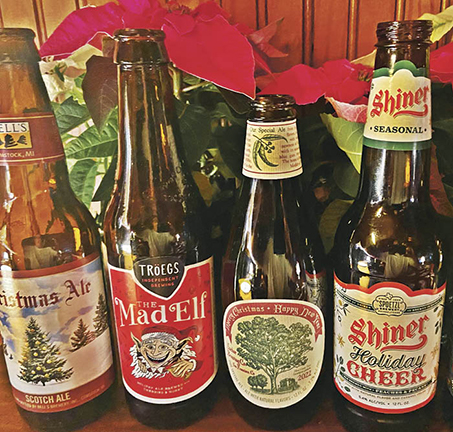 Beer and Christmas. It’s certainly not the first thing that comes to my mind about America’s favorite holiday. Well, unbeknownst to me there are more than 1,400 Christmas beers on the market. Can you believe it? And according to the National Beer Wholesalers Association, Christmas is the number four beer holiday in America. How have I not known Christmas beer is a thing?

It’s been a thing since the time of the Vikings. In late December, to honor Norse gods and the winter solstice, Vikings would brew special dark, malty beers. As Christianity came to Scandinavia in the 10th century, certain laws even required citizens to brew beer to honor new deities and the new Christmas holiday. Christmas beer became a long-standing European tradition that continues today.

Here in the US, the first commercial Christmas beer was brewed by the San Francisco-based Anchor Brewing Company in 1975. It’s still around, so I thought it the perfect start to my exploration of Christmas beer.

Anchor’s Christmas Ale is a Belgian-style ale but a tad lighter in body and booziness. The company adjusts its recipe every year. The 2022 holiday brew is a red rye ale showcasing hops—not too much—and orange peel to give it a slight bitter Italian flavor that I find most agreeable. I think it would pair nicely with a fruitcake. And I mean that as a complement.

Troeg’s Mad Elf Ale is another of the older domestic Christmas beers, first brewed in Pennsylvania, in 2002. I couldn’t wait to try this bottle emblazoned with the face of an inebriated-looking elf with green eyes. Mad Elf is a reddish ale emphasizing four different kinds of cherries, along with honey, cinnamon, and allspice. To me, the taste is somewhat reminiscent of Robitussin cough syrup. I suppose Mad Elf’s 11 percent alcohol level might help one cope with certain family situations during the holidays, but I’d have to be mad to drink more than one of these ales.

No one would consider you mad if you served Bell’s Christmas Ale at a holiday gathering. This offering from Michigan is described as a typical Scottish ale—rich and malty with a slight caramel taste. It’s not particularly Christmas-y, but maybe that’s okay.

Another Christmas beer from the Keystone state is Victory’s Merry Monkey. Yes, there’s a monkey featured on the label of this Belgian-style ale promising festive notes of cranberry, orange peel, cinnamon, and nutmeg. Lots of nutmeg. My tasting companion swears there is also a hint of fermenting banana in this beer. The slugs in my garden would really go for this.
New York’s Southern Tier 2XMAS Belgian-style ale sounds interesting as it is brewed with orange peels, ginger, cinnamon, figs, and cloves. However, the nose on this beer is so cloying that all I could think was egad, I’m drinking a holiday-scented candle! The cloves numbed my tongue. Wonder what it would do to a slug?

St. Bernardus Christmas Ale from Belgium is a dark, creamy, malt-style beer with hints of fruit, spice, and licorice and fire-roasted chestnuts. I didn’t taste any of that, perhaps because my tongue was still a bit numb. All in all, a nice beer.

Christmas Vacation is my favorite holiday movie, so of course I had to try Brew Dog’s National Lampoon Christmas Vacation Stout. It’s a dark stout infused with pecan and toffee flavors and a hint of vanilla. I’m no Scrooge, but to me it tastes like some meathead bro mixed a Starbuck’s vanilla latte into an Irish Guinness stout. Moreover, I still can’t figure out what this odd taste profile has to do with the movie.

The final entry in my Christmas beer taste test was Shiner Holiday Cheer. Brewed in Texas, a state I have little use for these days, this dunkelweizen-style German wheat ale surprised me. A perfect balance of peaches and roasted pecans gives this beer a unique and subtle holiday mouthfeel and left me licking my lips and wanting more.

Yes, there are both hits and misses when it comes to the weird world of Christmas beers. But here’s the thing: you have the rest of the year to drink serious hopped-up IPAs and old school lagers. Why not try something festive and a wee bit tacky this holiday season? Put on your worst holiday sweater, play some Bing Crosby tunes, and sip some Christmas beer. You might find something to incorporate into your holiday traditions. Or if not, use it to bait the slugs in your garden. Cheers! ▼