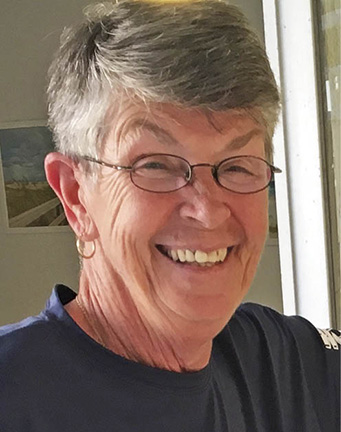 Evelyn (Evie) Simmons, 74, of Rehoboth Beach, Delaware passed away Wednesday, September. 21, 2022, at Beebe Medical Center in Lewes. She was born on January 28, 1948, in Philadelphia, Pennsylvania, daughter of the late Merle Fran Simmons and Jesse (Simon) Simmons.

In 1982, Evie met her life partner Barbara Thompson. They bought a vacation home in Rehoboth Beach in 1993 and split their time between Marlton, New Jersey, and Rehoboth Beach.
During an April 1999 rainstorm, Evie stopped to assist a young driver who had run off the road. As she stood outside the car, Evie was hit by a second skidding car, resulting in serious injuries and the amputation of her left leg. Not only did Evie return to her school job following the accident, but she took up golf more seriously than before. She continued to captain her beloved boat and was a 10-year member of the Coast Guard Auxiliary. Evie was the first Delaware amputee to be permitted to keep a captain’s license.

By 2003 Evie and Barb were retired and living in Rehoboth Beach full-time. They traveled to Canada that year to be married legally.

She enjoyed capturing nature in photography, wanted to be first to own every electronic gadget ever invented, and loved her riding lawn mower. Evie especially enjoyed dropping crab pots in Rehoboth Bay, catching and cooking hard-shelled crabs, and then inviting friends to crab feasts.

A spiritual and generous person, Evie was a long-time member of Metropolitan Community Church of Rehoboth. She donated the funds for the purchase of the land along Plantation Road where the congregation constructed its home.

Above all, Evie was a devoted spouse, a woman who adored her family and friends, and an animal lover who was partial to Yorkshire terriers. Her last rescue was a three- legged yorkie-cairn mix named Toddy.

Evie is survived by her wife of 40 years, Barb Thompson, of Rehoboth Beach; her sister and brother-in-law, Beverly and Dan Cunliffe, of Blackwood, New Jersey; her nieces, Alyson Cunliffe and Devin Graham; and Devin’s son, Jaxon, who Evie positively adored. She also leaves behind a community of grieving friends too numerous to mention.

Soon, a softball scholarship will be created in Evie’s name, along with the Shore Sharks Softball Team, to make an annual award to a female softball player at Cape Henlopen High School.

Michael was a dedicated employee with a strong work ethic who brought his heart and personality with him each day to the workplace. His career with Giant Food began in Maryland.

Spurred on by his and Dennis’s love of the beach, they moved to Rehoboth, where Michael helped open the first Giant store in the area in 1999. Mike worked in various capacities with Giant, retiring with over 20 years of service.

A great joy in Mike’s latter years was the opportunity given to him by longtime friend Joe Maggio, to work well past retirement as a lifetime employee of Joe Maggio Realty and Keller Williams Realty. His official title was Director of First Impressions.

When anyone met Michael, the first thing they learned about him was how proud he was of his Greek heritage. Michael was full of bluster and opinion yet devoted to family and to his faith. Over the last few years, Mike’s greatest pride was his special relationship with his great-nieces and -nephews and their daily FaceTime sessions.

Dave was a floral designer who loved gardening, growing beautiful flowers, and the art of making gorgeous floral arrangements.

After meeting the love of his life, Thomas Zamonsky, he realized that he had a passion for travel. Dave worked as a business travel consultant with Milne Travel in Manchester, New Hampshire. He enjoyed taking cruises, traveled the world extensively, skied the Alps, and loved seeing all the natural beauty of Europe.

He was preceded in death by his parents. Dave is survived by his loving husband and companion of 41 years, Thomas J. Zamonsky; three siblings, Theresa Jean Hendrickson Scalleta of Rancho Cucamonga, California, Stephen Hendrickson of Estero, Florida, and Mary Hendrickson Laughlin (Anthony) of Vancouver, Washington; a stepmother, Linda Hendrickson; and several extended family.

Lynn grew up in Delaware County. She attended Ursinus College in Collegeville, Pennsylvania, and obtained a bachelor’s degree in veterinary science. Lynn had many and varied interests and hobbies. She loved yard sales and flea markets and enjoyed shuffle bowl—she was in the league for over 20 years. Lynn was also a diehard Eagles fan and always looked forward to cheering her favorite team during games.

A kindhearted spirit with a charitable nature, she loved all animals and often sought shelter for them. Lynn was a proud member of the Elks Club #2540, and the American Legion Post 17. Above all, she enjoyed spending time with those she held most dear. Lynn was a loving and devoted spouse, aunt, and friend.

Lynn is survived by the love of her life and companion for the past 35 years, Kathryn Teresa Myer, who she married on July 13, 2014; her sister-in-law, Carol Fleming (Charles); her mother-in-law, Terry Myer; many extended family; and her beloved rescue dog, Lucy. ▼

Jerry Stansberry, age 87, of Rehoboth Beach, passed away on Friday, September 9, 2022, at Delaware Hospice, in Milford, Delaware. She was born on August 15, 1935, in Winston-Salem, North Carolina.

Jerry built a lifelong career as a master plumber, owning and operating a HVAC plumbing company in Northern Virginia. She had many and varied interests and hobbies. Jerry loved water skiing, football, pickleball, and all sports. Above all, she was a devoted wife and vibrant friend.

A memorial Service will be held on Monday, October 24, 2022, at 11:00 a.m. at Epworth United Methodist Church, 19285 Holland Glade Road, Rehoboth Beach, Delaware, where friends and family may visit beginning at 10:00 a.m. Interment will follow at Epworth Methodist Cemetery, 187 Henlopen Avenue, Rehoboth Beach. In lieu of flowers, the family suggests donations in Jerry’s memory to the Parkinson’s Foundation, parkinson.org. ▼