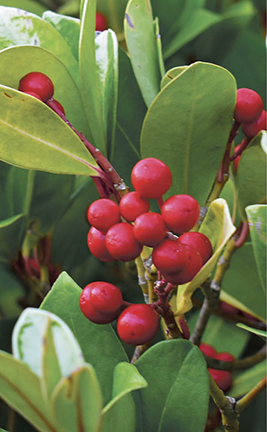 When the calendar flips to November, my mouth starts drooling for anything cranberry. It’s a staple in our holiday dinners and in one of our standard cookies for giving to friends and family. Cranberry is an American native, low-spreading woody shrub, perhaps most famous in New England and in the northern Midwest states. Found in bogs in the wild, its fruit is buoyant and is the reason why they are harvested while flooding the fields in which they are grown.

Cranberries can grow in planting zones 4 through 7 (Delaware is zone 7). However, they do best in the more northern range of these zones.

As my mind dreamed of cranberry relish, cranberry oatmeal cookies, and cranberry sauce sliced evenly along the aluminum can’s rings, I transitioned into thinking of alternative groundcovers that could be used in the landscape. (Yes, my chosen career path makes me wonder of such Venn diagrams.)

Related to cranberries, blueberries can be a great addition to the garden. The lowbush blueberry only grows about two feet tall (sometimes three) and can be used as a groundcover in certain areas where you wouldn’t mind a taller plant. Edible berries appear in June as expected, but the fall coloration of blueberry can be quite stunning. A reddish-purple color fills the garden in autumn and adds a third season of interest.

Another low-growing, native woody plant is wintergreen (Gaultheria procumbens), also called teaberry. Its red fruit resembles those of cranberries. Actually, the extract from this plant is used to flavor such things as teas, candy, and chewing gum. Wintergreen grows very low to the ground and spreads through underground stems. Its leaves also change to red as the nights get colder and daylight gets shorter.

Bearberry (Arctostaphylos uva-ursi) is a native, woody groundcover that also has small reddish berries. Bearberry is best suited to sandy soils and is often seen in the New Jersey pine barrens and is very common in the Cape Cod region. A great alternative groundcover in rocky or sandy landscapes, its small leathery leaves turn reddish-purple in fall. Bearberry is long-lived, however its rate of growth is extremely slow. It is also known as kinnickinnick, a word coming from the Indigenous people of Canada meaning “smoking mixture.”

Let’s keep the woody groundcovers going with cotoneaster. Rockspray cotoneaster (Cotoneaster horizontalis) only grows up to three feet tall. It also produces small red fruits along its distinctive branches, which look similar to fish bones in form. It’s great for rock gardens and walls where its arching branches can spill over and fill the space with texture and color.

Another cotoneaster is Coral Beauty (Cotoneaster dammeri ‘Coral Beauty’), a great low-growing, spreading plant that also has lovely berries in the fall and winter months. Its leaves tinge purple in autumn. Growing up to two feet in height and spreading up to six feet, it makes a handsome, three-season addition to the landscape.

I hope these alternative, woody groundcovers give you inspiration to try in your own gardens. Consider your existing conditions, the soil type that you have, and how much sunlight your area gets. You may find that thinking outside the box will turn your outdoor living space into a brand-new showroom of sorts. Other choices for a woody groundcover (but don’t include the decorative berries) are plumbago, candytuft, creeping St. John’s wort, and numerous spreading junipers.

Here’s to a great Thanksgiving and a happy holiday season. Enjoy the time off from the garden and start planning for next year!

Stay safe and let’s garden together! ▼