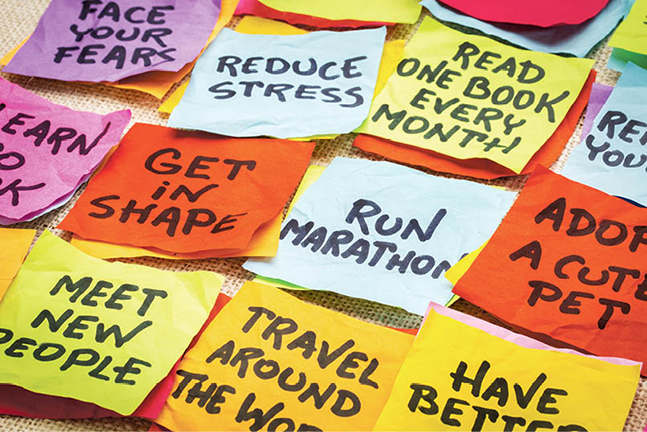 And so, here we are—about to start another year, one during which we’re all hoping we continue to emerge from the depths of the COVID pandemic. May 2022—please!—be better than 2021, which itself was surely better than 2020. There continue to be signs that will indeed be the case—for all that the omicron variant has us, once again, on edge.

As with most incoming years, this one is being preceded by lots of resolution-related press. Some is encouraging; some, not so much. The stats on the percentage of people still actively working their resolutions come February 1 (20 percent) are discouraging. Even worse—just eight percent stick with their resolution(s) for a full year. I mean—why even start?!

Some coverage is interesting; for example, there was a study of what types of resolutions are more likely to succeed—or fail. It turns out that resolutions aimed at quitting something are less successful than ones aimed at starting something; apparently, it’s easier to establish a new habit than to banish an old one. And while one way to break an old habit is to establish a new one in its place, some common sense should prevail: resolving to simultaneously stop smoking and jog five miles a day may be aiming high.

But my favorite among the things I’ve read or heard over the past week or two was a snippet from a DJ on a Sirius XM jazz station. This woman—whose name I didn’t catch—was talking about her past, failed resolutions. They were the ones we usually make—lose weight, eat healthfully, exercise more.

But a few years ago, she came up with an approach that is working well for her: she chooses a word to focus on in the upcoming year, finding ways to live that word into her thoughts and actions. One year, she focused on kindness; another, on forgiveness. She’s focused on love.

She talked about how she’d call her word to mind when confronted with a difficult situation or challenging person. And how she’d try to pause for just a moment to allow space for that word to refocus her response. To hold that situation—or person—in the context of kindness. Or forgiveness. Or love.

She’d found that focusing on a single word each year and learning to embrace it—however momentarily—was enabling her to change in ways a more concrete resolution might not have done. Each year, she could feel tiny, incremental changes that reverberated throughout all aspects of her life.

I was intrigued. And started thinking about what word I might choose to focus on. I didn’t want to just start where the DJ had; there might well be words I needed to focus on more. I thought about “resilience,” the past year or two’s go-to word for sure, as we all sought ways to slog on. But I’d read—or even written!—that one so many times in the past year (or two) that it felt hackneyed.

I talked to a friend about this word-of-the-year idea; she suggested “patience.” I didn’t probe too deeply to discover exactly why she’d so quickly come up with that one for me. Patience would indeed be a good word—it’s not something I have in abundance, and many situations would benefit if I could develop more. But I’ve been trying to be patient for decades; I feel as though I have the habit of the attempt as well-established as it’ll ever be.

I thought about “acceptance.” That, too, could come in handy. There are any number of things it’d be best if I learned to take as they are and left off my efforts at improvement. But that sounded a little too much like “surrender” or “quitting” to me, for all that there are distinct differences among those words. I couldn’t see myself spending a year trying to be more “accepting” if “quitting” echoed softly in background each time I took my moment to focus. I knew the first thing I’d quit would be focusing on acceptance.

And then, as I walked my dog one morning, my word surfaced. It’s “listen.” The benefits of listening, such as demonstrating your willingness to hear what someone has to say, learning new ideas, or considering new perspectives, are well established. But they may be hard to recall when we’re eager to refute an argument or suggest another view or even just chime in, in support of someone else’s words. Though we know that the moment we do, it’s all too apparent we’re no longer listening. I know I’ve sometimes stopped listening—and started talking—way too soon.

So next year, I plan to take momentary pauses to listen. If I succeed, I might well be able to be more patient. More accepting. Kinder. More forgiving. More loving. And maybe do my bit to make next year a happier one all ‘round. ▼

Marj Shannon is a writer and epidemiologist. She can be reached at marj@camprehoboth.com.