Out on the Town 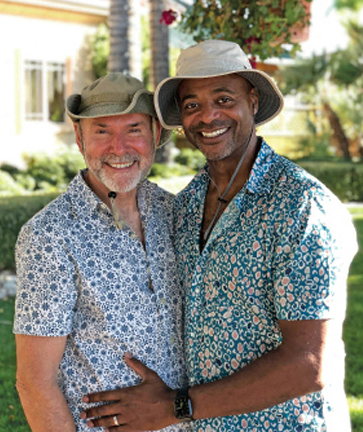 This is the first of a two-part series; part two will appear in the July 8 issue.

Larry Richardson and Joe Filipek are an interesting gay couple you’ll want to meet. They are in Rehoboth for six months out of the year and in Ft. Lauderdale the other six. Larry describes himself as a “double dipper,” meaning he had his first career in the Navy and his second career with the US Postal Service. Joe, on the other hand, has been in the pharmacy industry for the duration of his adult life. He started out as a clinical pharmacist and later created a company that catered to the managed care industry.

This dynamic duo has been together for 15 years and married for four. They bring joy to each other’s lives and complement the best traits in one another. There was a time when they could not imagine getting married as a gay couple. As Larry shares, “This is something that I don’t take for granted. I wake up and I thank God that I am married. This is all thanks to the efforts of CAMP Rehoboth, courageous legislators, a number of our allies, and others who made it possible. And it is something that we want to make sure we protect.” Joe adds, “Once [same-sex marriage] became legal, it made such a big difference. It also made a difference in the way other people view us and the way we view the world.”

Asked how they established a relationship with CAMP Rehoboth (where they are Founders’ Circle members), Joe shares, “That’s a great question because back then Rehoboth was a much smaller community. I would come down on weekends to relax and enjoy the beach with my friends. In the early days, I had a share in a gay group house that, along with many other group houses, sponsored weekend parties. To acquaint one another, one of our friends (Chris Riss) led the effort to collect names and phone numbers to create a community beach directory. Many of us listed in the beach directory attended early Sundance parties and subsequently joined CAMP Rehoboth. As Sundance grew, I began to see that CAMP Rehoboth was doing a lot of neat things—becoming more involved in community outreach and actively recruiting people.”

“CAMP’s community outreach began to expand. In addition to Sundance, there was the live auction, beach volleyball, follies, pool parties, bachelor auctions, and more. These were large community outreach events with a personal touch. They created a lot of excitement because everyone got involved. In the process, you got to know a lot more people and you developed more close friendships.”

Larry dovetails with Joe, “I’ve always loved CAMP Rehoboth and I love the community. When it came time for me to retire, I remember how grateful I was that I had this community to belong to. We were used to CAMP being on the front lines. And we are not going to stop our support for CAMP, but we want to see it be the leader in the community that it has been in recent years.”

Joe speaks from his heart in saying, “I also want to say that we have lived through the positive aspects of CAMP Rehoboth. When I first came here, Rehoboth promoted itself as a small family town. Every now and then you would be walking down the sidewalk, and someone would shout out a derogatory comment from their car. But that began to change, and you realize that CAMP was a major reason why that change took place. It was the efforts of Steve Elkins and Murray Archibald that was the driving force behind this.”

If you happen to meet Larry and Joe in Rehoboth, or perhaps even in Ft. Lauderdale, you will have met two men who are committed to each other and to CAMP Rehoboth. They have so much to offer with their friendship and their insights into life. ▼ 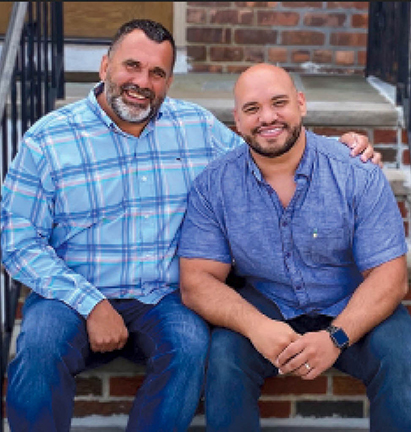 If you happen to meet Dennis Diaz and Michael Ewald, you’ll recognize right away that they have something contagious. Don’t worry, though—what’s contagious is that they are almost always smiling! Sitting down with them recently for an interview via Zoom, I found these two men quite engaging. Their smiles are very contagious indeed.

Their perception of CAMP Rehoboth focuses squarely on its diversity, within those who volunteer or attend CAMP events, and even on its Board of Directors. They appreciate the fact that the spectrum of the LGBTQ community is represented in some fashion on the Board.

Dennis and Michael have been a couple for 15 years and married for nearly four years. Michael grew up on Long Island, Nassau County, and Dennis grew up in the South Bronx. Having moved from the New York City region in 2017, they settled into a spacious farmette in the Milton/Lewes area. Michael sold his meat and provisions business that he had established in New York City 20 years prior. His aunt who lived in Milton was the drawing card to relocate to southern Delaware. He maintains a few rental properties that provide a comfortable income stream.

It did not take long for them to fall in love with the area. Dennis had started a digital marketing company, which was recently acquired by a publicly-traded company out of Miami. His company caters to the laundry industry. An interesting development for Dennis has been serving as an executive member of the Board of Directors of LaundryCares, a childhood literacy foundation. It places children’s libraries inside of laundromats, establishing accessibility to books in this venue.

There is a fascinating story to Dennis and Michael making a connection with CAMP Rehoboth. Dennis says, “The main connector was the Young Professionals Group that CAMP had. There was an event at Lefty’s, and I had been introduced to Chris Beagle. I became more involved with the Young Professionals development. Then, of course, other events came into play, such as Sundance. Making these connections organically at CAMP made a big difference for me.”

“Mutually connecting with other people—just knowing other people helped me. I wish the Young Professional Group still had some momentum. We had as many as 30 people involved. The age limits to the group were not as important as having the professionals themselves. The older members would be able to provide guidance and expertise to the younger members.”

Dennis shared that what CAMP is good at these days includes its health and wellness component across the diverse members of the community, not just the men. Facilitating all that is a really positive aspect of what CAMP does. He wishes CAMP would expand its opportunities to impacting the greater region. “I wish it would be more of a channel to show people the good aspects of the Rehoboth area. CAMP could expand its footprint both internally and externally. It could be more of an influence socially, politically, and in other areas of our lives. Advocacy, education, and social development of CAMP’s programming could provide more of an influence in the lives of people here.”

You may run into Dennis at the gym at King’s Creek. Michael, however, is more likely to be seen back at the farmette. They both want everyone to be connected to the Rehoboth community. The Young Professionals Group was their connection, and they would love to see it revived. Also, the Rehoboth Beach Bears is a terrific group to meet other people in the area.

As Dennis summarizes, “The only other thing to understand is the mindset we bring to each other and in this time of Pride—we must build up each other’s confidence. You need to find your own ‘tribe.’ And it helps to have a good partner at your side.” ▼