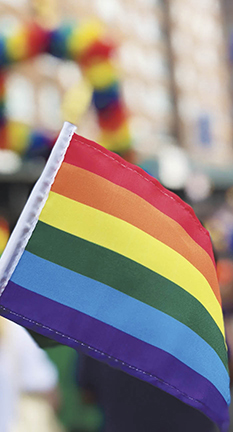 I’ve run across articles bemoaning “Pride fatigue” in several publications recently. I get it. I’ve done lots of Pride marches and parades during my nearly 62 years on earth too, and the commercialization and sameness have both bored and depressed me at times. But I think it may be more important than ever, with our hard-won civil rights in the crosshairs, that I participate this year.

When I came out in 1980, I was living in Columbia, South Carolina, where being an out lesbian was risky. Police raids and harassment in the gay and lesbian bars, under the auspices of illegally serving liquor to people under 21, was a common occurrence. I was spat on, catcalled, name-called, threatened, and had a full beer bottle thrown at my head in the parking lot of numerous gay and lesbian bars at various times during my years there. You didn’t dare hold hands outside the front doors of the bars, lest you drew the wrath of the drunken, angry rednecks. There were no Pride parades when I lived there, although there are now.

In fact, it wasn’t until 1989, after I’d moved to DC, that I attended my first Pride march and parade. And what an amazing experience it was! The multitudes of queers were thrilling, and we danced and sweated our way through throngs of joyous, half-naked people and vibrant floats. I was not out at my job (although everyone either knew or suspected) but the welcoming vibe in the city, and especially at Pride, were almost overwhelming. You never forget your first Pride.

But the best Pride I ever experienced would happen after I moved to NYC. I had attended the Dyke March and Pride parade since I had moved there in 1993, but in 2004, I was actually IN the parade, part of the motorcycle contingent that kicked-off NYC Pride.

My girlfriend at the time was a member of the Sirens Motorcycle Club of NYC, so of course, she had done the parade many times. But being front and center, seeing the streets lined with cheering, happy people from start to finish from the back of her bike was epic. I smiled and waved, and the crowds smiled, yelled, and waved back at me. It was an amazing experience.

I moved to Dover in 2005 to be with the love of my life. And the Delaware Pride festival, which was then held in Rehoboth, was no less fun. Like the old state motto, I’ll always remember my first Delaware Pride as a small wonder. It’s the spirit that counts most, and that was vividly on display. I felt so much pride to be part of my newly-adopted home state.

At this writing there has just been another tragic mass shooting, 19 elementary school children and two teachers at a school in Texas. That’s on the heels of the racist neo-Nazi who killed 10 Black people at a Buffalo supermarket just a week prior. What if some gun-toting whacko decides he’s gonna shoot up a Pride parade? After all, we can never forget the 49 souls who were gunned down in cold blood and 53 wounded in the 2016 mass shooting at Pulse, the gay nightclub in Orlando.

And of course, we’re still in a pandemic. A co-worker and friend both tested positive this week as cases rise once again.

I hope that I decide to go to the Pride celebration this year, but I don’t know that I will. I’ve never let fear hold me back from doing the right thing in the past. But I’m older, wiser, and…tired. For those that celebrate, I hope you have a safe, wonderful time. Lift a glass for me and bring me a t-shirt. ▼

Beth Shockley is a public affairs specialist and a former editor of Letters.

Photo by Charlotte Turner on Unsplash