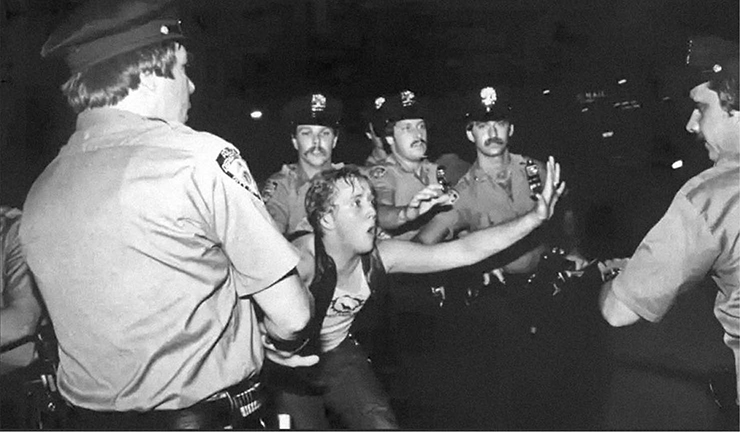 It’s been more than 50 years ago this month that four days of demonstrations by members of the gay community began in New York City’s Greenwich Village in response to a police raid of the Stonewall Inn. Engaging in homosexual acts was illegal at that time in every state except Illinois. The event made the headlines of most New York newspapers.

Even though I lived just 25 miles north of the city, the historic event might have eluded my attention: I was a teenager in an all-girl Catholic high school. But, I had a crush on Brian, an older boy from a town close by. I was so much in love that it hurt.

Brian became even more appealing when he moved to an apartment in the Village with his friend Bill. I used to tell my parents I was going to the movies and head to Manhattan with a carload of friends to hang out at Brian and Bill’s.

Brian and I had dates. We were affectionate and experimented but, as a good Catholic girl, I drew a line in the sand. I was thinking of asking him to my senior prom the following year.

We’d eat, we’d get high, and we’d walk. We’d walk around the neighborhood. Often on those walks the boys wanted a beer. I was under 18, so Brian would tell me to wait outside while they went in for their brews. After several times waiting outside one of these bars, observing the clientele walking in and out, I began to get curious.

Then there were Brian and Bill’s friends that stopped by their apartment. Interesting, handsome young men for sure, but asking me make-up questions? Really? And, except for my friends and I, there were no other girls around. I was confused.

In fact, I was so confused I went to the public library to look up homosexuality. I believed that homosexuals wore dresses and were effeminate which did not at all describe Brian, Bill, or most of their friends. I could think of none of my girlfriends who would have understood what I was feeling. They were dating jocks from the all-boys Catholic school. I hung out with the public-school boys.

I loved Brian and loved going into the city. I remember one afternoon we walked to Washington Square to his friend’s apartment. Inside this stark, black-and-white modern split level sat American playwright Edward Albee. I had read The Zoo Story and Who’s Afraid of Virginia Woolf? I was over the moon with excitement. I felt so cool, yet the thrill that consumed me remained only mine, tucked away deep inside. No one I knew would understand. How could they, when I didn’t?

My reporter’s curiosity and instincts kicked in. I needed to know yet I was uncomfortable asking Brian myself. What would I say? How could I say it? So, I asked my friend Chris to find out for me. He invited them to come to the country for the weekend, where he had converted a horse stable on his family’s property into his living quarters.

Chris did as I’d asked. However, he discovered that not only were Brian and Bill gay, but that he was, too. When I got mad at Brian for “changing Chris” that fateful night in the country, Brian’s retort was, “It shouldn’t be such a big deal. You know about Gary and Greg.” They were my girlfriends’ boyfriends. And no, I didn’t know.

Brian and I never went to my senior prom, although we remained friends until his death. Stonewall will always remind me of how Brian came out to his mother and brothers: they saw him in one of the photos in the newspaper with the story about the riots. Brian’s mother was so happy to have me in his life. She had sent him to a psychiatrist who put him on lithium. I guess they thought at the time that Brian could be “fixed.”

Brian and Bill were lovers at a time when the word ‘gay’ was not used to describe a homosexual. They were gay at a time when no one in my sphere really knew what it meant to be gay. It was also a time when AIDS didn’t exist. It was a time of free love for all sexes, rebellion, and experimentation. We were going to change the world. Looking back 50 years later, I guess we did. ▼

Pattie Cinelli is a wellness coach, yoga and Pilates teacher, and a health and wellness writer. You may contact her at fitmiss44@aol.com.