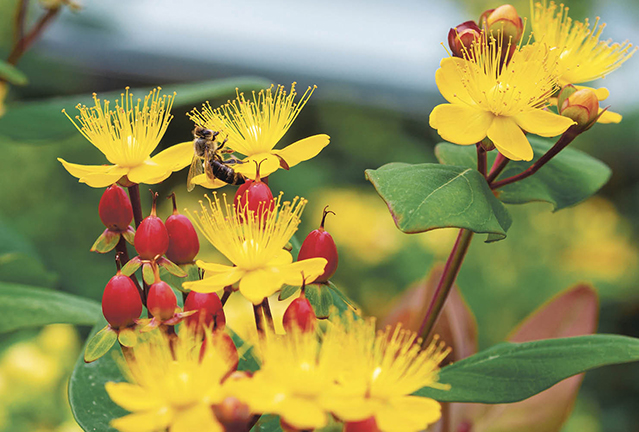 June is the official start of summer in the northern hemisphere. It designates the point at which the north pole is angled so that is closest to the sun and the south pole is the furthest from the sun. This specifically happens on June 21, and the longest amount of daylight will occur.

In ancient times, especially in the Scandinavian countries, celebrations and rituals coincided with the summer solstice. Many called this time Midsummer. It was thought that magic in nature was its most pronounced and auspicious at this time. Flowers and herbs were often cut and brought indoors. Maypoles were decorated and danced around, and bonfires were enjoyed during the nights leading up to and including that day.

Flowers were made into garlands and worn around necks to chase away demons. The most powerful plant was “chase-devil.” These traditions were performed hoping to ward off evil spirits and bring good luck in the year’s harvest to come.

The Greeks celebrated with Kronia, a festival honoring Cronus the god of agriculture. And the Romans held Vestalia, a celebration to Vesta, goddess of the hearth. Once Christianity came on the scene, it was appropriated and celebrated as St. John’s Day, for the birth of St. John the Baptist. Coincidentally the flower, “chase devil,” is now known as St. John’s Wort.

That was a lot of background before getting to the subject of this article, one of my favorites and often-used flowering shrubs in the garden, St. John’s Wort. Bright yellow buttercup-shaped flowers sit adorning arching stems of this small to medium sized shrub. The blooms are most proliferous in late spring and early summer but will sporadically bloom all growing season.

There are numerous species and varieties of this plant, some of which are invasive. Let us look at one of native species to North America, Hypericum frondosum, the golden St. John’s Wort. Native to central and southeastern United States, this small to medium shrub has a number of varieties. “Sunburst” is a common variety found in nurseries.

The leaves are tinged blue and the shrub only grows to a compact four feet tall and wide. This makes it perfect for a foundation planting, planted in mass for greatest impact, and planted as an ornamental hedge. In addition to the flowers all summer, it is followed by reddish ornamental fruit in the autumn.

St. John’s Wort is tolerant of rabbit and deer grazing since they tend to avoid this plant. It is semi-evergreen in our region and if grown further south, will tend to be evergreen. Full-sun to part-sun is best for flowering and overall health of the plant. It prefers moist but well-drained soils. If it appears leggy, St. John’s Wort will respond well to a light pruning.

A relatively new hybrid of St. John’s Wort is a series called FloralBerry®, with the varieties named after our favorite wines. Not only beautiful for their flowers, but their fruits in autumn are stunning and are the color of the wine they are named after. My favorite is Rosé St. John’s Wort, with its yellow flowers and rose-colored fruit. The flowers and fruit are used in floral arrangements; their stems can be found in many local floral shops.

Think about adding St. John’s Wort to your landscapes and gardens. The varieties that are available now are more compact than the straight species and can even be planted in containers for a sunny patio. Add a plant or two to a cutting garden for contrasting texture and shape, as well as cutting stems for your home arrangements.

Enjoy the longest day and celebrate with the wonderful, handsome St. John’s Wort.

Stay safe and let’s garden together. ▼