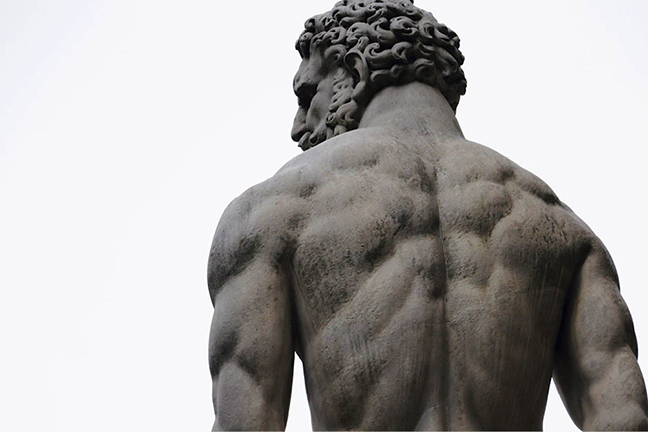 Golden Age Hollywood’s countless “sword-and-sandal” movies have usually depicted the ancient Roman male as either a shield-wielding soldier conquering every little tribe in Rome’s path, or a toga-wearing orator mansplaining everything to everyone in earshot, or another toga-wearing guy hatching devious schemes to cut throats or poison relatives to achieve political power. And after all that soldiering, orating, and scheming, they’d banquet on couches and get good and drunk while watching a female dance around wearing nothing much more than bangle bracelets and a bit of sheer.

Here and there, these Hollywood epics alluded to a different taste in sexual desire; Laurence Olivier’s “snails or oysters” speech to a half-naked Tony Curtis in the movie Spartacus comes to mind.

But if Hollywood minimized homoeroticism in the ancient word, the Romans themselves did not. Their poets sang its praises, sometimes as beautiful love poems, sometimes as lusty, almost pornographic verses.

Not much was taboo for high-born or prominent Roman men. Take, for example, Quintus Lutatius Catulus (149 BCE-87 BCE), respected general, Consul of the Roman Republic, an orator and author admired by no less than the likes of Pliny and Cicero. Catulus was fond of the Hellenistic Greek form of short, highly personal poems known as epigrams. He adopted this form, bringing it into the repertoire of Roman poetry. Of Catulus’s two extant epigrams, one of them, “With Looks And Hands, A Satyr Courts A Boy,” well, the title alone might cause 21st century blue-noses to suffer the vapors. Pliny and Cicero, though, evidently thought it was just swell.

Not to be confused with the Catulus just mentioned, Gaius Valerius Catullus (84 BCE-54 BCE) remains one of the most widely read of ancient Rome’s poets, an important figure in university poetry classes. Though a number of his ardent love poems are in praise of a woman named Clodia Metelli (whom he called Lesbia, but had nothing to do with lesbianism. Drat!), Catullus wrote homoerotic poems as well. Poem 48 is a striking example, which begins, “Your honeyed eyes, Juventius, if one should let me go in kissing still, I would kiss them three hundred thousand times,” and ends with “…if the harvest of our kissing were thicker than the ripe ears of corn.”

Among Rome’s most famous poets is Publius Virgilius Maro, known to every student who’s had to plow through his post-Trojan War epic, The Aeneid, as Virgil. Mighty as that epic is, with its story of the Trojan hero Aeneas’s ordeals and eventual arrival in what would become the city of Rome, Virgil had a more sensual and romantic side. His “Ecologue II” sings of unrequited love for a beautiful young man, and begins thus: “The shepherd Corydon burned for his handsome Alexis.” Later in the poem, poor Corydon even goes on to say, “You drive me to my death.” Ah yes, dying for love. Shakespeare and countless Italian operas have milked that drama for centuries.

And finally in our little tour of Roman homoerotic poetry, we come to Albius Tibullus (55 BCE-19 BCE). Not much is known of Tibullus’s life. We do know he was member of the landed gentry, complete with a country villa, but he lost his lands (though was able to keep his house) in the upheavals caused by the frictions between Marc Antony and Octavius, the latter soon becoming Rome’s first emperor, Augustus. In any event, two of Tibullus’s books of poetry are extant, with two others doubtful in their attribution. The first book contains the “Maranthus Cycle,” poems of homoerotic desire. Tibullus gets pretty explicit right away, asking the god Priapus, god of male virility, for advice in winning the young Maranthus: “Priapus, what skill of yours captivates lovely lads?” Note, the poet does not ask Venus, goddess of love, or her son Cupid for assistance in winning his heart’s desire. He asks the deity known for an enormous male member for help in fulfilling his sexual desire.

In our current climate of hyper-awareness of sexual do’s and don’t’s, what was acceptable in ancient Rome would be considered problematic today. There was no taboo regarding younger men having relations with older ones. The poetry created by Catulus, Catullus, Virgil, and Tibullus was therefore honest for its time. These poets, and the Roman populace generally, felt no need to cloak their desires in hidden meanings and teasing language. Until the Christian period, decreed by the emperor Constantine in 313 CE, Roman society accepted that art was free to express every element of human experience, including sexual desire in all its forms. Sex between men was worthy of poetry.

Photo by Simone Pellegrini on Unsplash